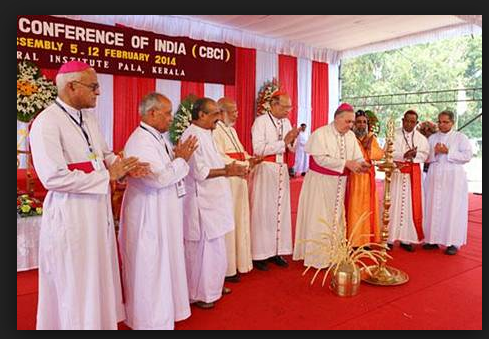 Report – CCV: Syro Malabar Catholic Bishops in Kerala seem to have opened a ‘Who is more right’ controversy over a statement delivered by Bishop of Idukki recently, on which Kerala Catholic Bishops Council officially expressed its’ regret last day.

Bishop Anikuzhikkattil had accused a Hindu outfit Sree Narayana Dharma Paripalana (SNDP) Yogam of abducting Christian girls by “love jihad.” “Inter-caste marriages would destroy Christian essence and style. Our girls are being abducted by love jihad… secret aims of the SNDP Yogam. We should be vigilant against this,” he said at while addressing a meeting of pastoral council.

The Kerala Catholic Bishops’ Council (KCBC) on Sunday expressed regrets over the statement of Bishop Anikushikattil on love jihad if it had hurt the sentiments of any community.

The KCBC statement maintained that the bishop's statement was not meant to hurt the sentiments of any community.

“If his statement hurt the sentiments of any community, it is deeply regretted,” the KCBC said in its statement.

“The Bishop was only trying to explain the possible discords that might arise in inter-religious marriages,” the Council pointed out.

However, an article written by Bishop Emeritus Mar Powatthil, which appeared in Deepika on 17th June has vehementally criticized the stands taken by KCBC and also Mar Arakkal, Bishop of Kanjirappally, by visiting SNDP Yogam Secretary at his house. Mar Powathil is openely supporting Mar Anikkuzhikattil and thus indirectly challenging both KCBC and individually Mar Arakkal.

The debate is likely to continue in media without an amicable settlement among the warring factions in KCBC.