Where are You Religions? 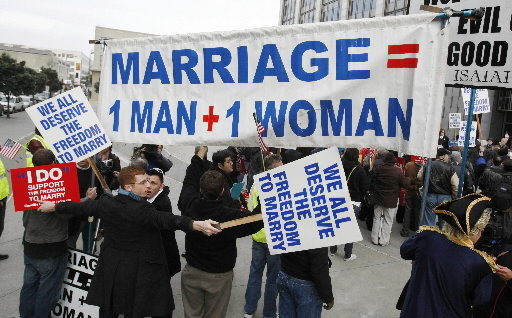 Swami (Dr) Snehananda Jyoti has sent us a very thought provoking article on Same Sex Marriage. Dr. Swami Snehananda Jyothi spent most of his life in USA. Quite attracted in distinct philosophies, he founded the 'East-West Awakening Ministries', which means an effective sharing of the philosophies of East and West. He also established four EWA Centers in USA and India. Joseph Mattappally, Associate Edior.

It is very important that I comment on this topic at this critical juncture. A few days ago (June 26, 2015) a judicial mega-bomb exploded in the USA ripping up the age-old social fabric of family and

married life as we know them over the entire age of human civilization. It reverberated the whole world over setting up a bad legal precedence for
the whole human family. In a historic, landmark judgment the nine justices of the Supreme Court of the United States ruled, with a 5-4 majority, into law legalizing same sex or gay marriage. One critic acclaimed this law as an instance of judicial tyranny.  Chief Justice, John Roberts, dissenting the majority opinion reversing same-sex bans in very critical terms suggested that it employs the worst kind of judicial activism that has no basis in the constitution. He also declared that from the stand-point of history and tradition, a leap from opposite sex marriage to same sex marriage is much greater than one from a two person (monogamy) union to plural unions (polygamy), which have deep roots in some cultures around the world.
Blasting the majority decision, Antonin Scalia, one of the justices, stated in his opinion that an unelected body of nine lawyers on the Supreme Court set themselves as the rulers of 320 million Americans. According to him this decision is an affront to democratic principle as the Supreme Court is increasingly creating policy encroaching on democracy rather than serving as a neutral arbiter. He further stated that this decision robs the people of the most important liberty asserted in the Declaration of Independence and won in the Revolution of 1776: the freedom to govern themselves. He further asserted that social transformation without representation is a violation of a very fundamental democratic principle. This law was passed on a majority of one.
Justice Anthony Kennedy, a swing voter in the Supreme Court, has been spearheading the movement over the years banning lower court decisions that went against homosexual unions. Interestingly the US Supreme Court decision comes on the heels of a traditionally conservative Catholic Ireland legalizing same sex marriage in a referendum in May 2015 that got 62 percent approval. Justice Kennedy wrote the majority opinion. He, a Catholic of Irish origin, needs to be aware that every individual liberty has limits in the context of a society. One’s rights and liberty are not absolute. We are all limited that is why we are all imperfect humans. Certainly everyone’s rights and dignity need to be protected without discrimination. Gone are the days!
As sharply dissenting Chief Justice Roberts pointed out that unelected judges should not be in the position of expanding rights seen as having roots in history and tradition at the expense of the people. A court has no right to redefine marriage that is very well defined as a union between one man and woman. It has no right to expand marriage to include lesbian or homosexual unions. We need to find a new term other than marriage to describe same sex unions. Civil unions appear to be an adequate phrase for same sex unions. The issue at hand is not equality. The same sex union is a different kind of union that is afforded the same legal protection as marriage. Whether same sex persons should be able to adopt or have children through insemination or renting of wombs are social, psychological, moral, and bio-ethical issues that need to be very thoroughly and sensitively dealt with on the basis of A cautionary note:  Social and biological engineering is taking place in materially developed countries at a very fast pace. These extravagantly consumer, wealthy countries, while solipsistically concerned about their ever-expanding rights, have scant concern for the basic rights and needs of the people of the poor countries, that form the overwhelming majority of humanity. We all belong to this one universe where everyone’s rights need to be valued. My lamentation here is: Religions, where have your spiritual power gone? Are you lost in this?

From Shadow of Darkness

A BIG   thank you  to  you  dear Jyoti for  raising the radical question: Where are  you Religions? They are all dead and buried long ago in thinking minds. They survive only in minds buried deep in fathomless oceans of blind beliefs   prophetically proclaimed by poet Vayalar of our own (Keralite) kith and kin. Didn’t he sing: Man created religions, religions created Gods etc?

Added to it think of the Holiest of holy Father  calling himself “a sinner” and proclaiming  from house tops, nay from above the clouds seated in a plane: "Who am I to judge"  precisely about lesbians in the  Vatican and still more, as you also hint at,  Ireland flaunted as More Catholic than  the Pope  voting  en-block  for same  sex unions.  I too was drunk   with such blind, mad beliefs long long ago, not any more. So who is to say; "I am correct" or "you are correct"?  Truth need not necessarily be with the majority no  matter how you or me wax eloquent about democracy.

TRUTH is the one thing that eludes humanity, like the shadow that keeps just beyondthe grasp of  the chaser. That is why I call myself "an ignorant idiot" and  “Know-nothing” and refuse to be judgmental. Judge not and you shall not be judged and learn  from all,  even  from the grave digger, is what I believe in until I am proved wrong. james kottoor