What difference from a teen-ager? – Gabriella Borter 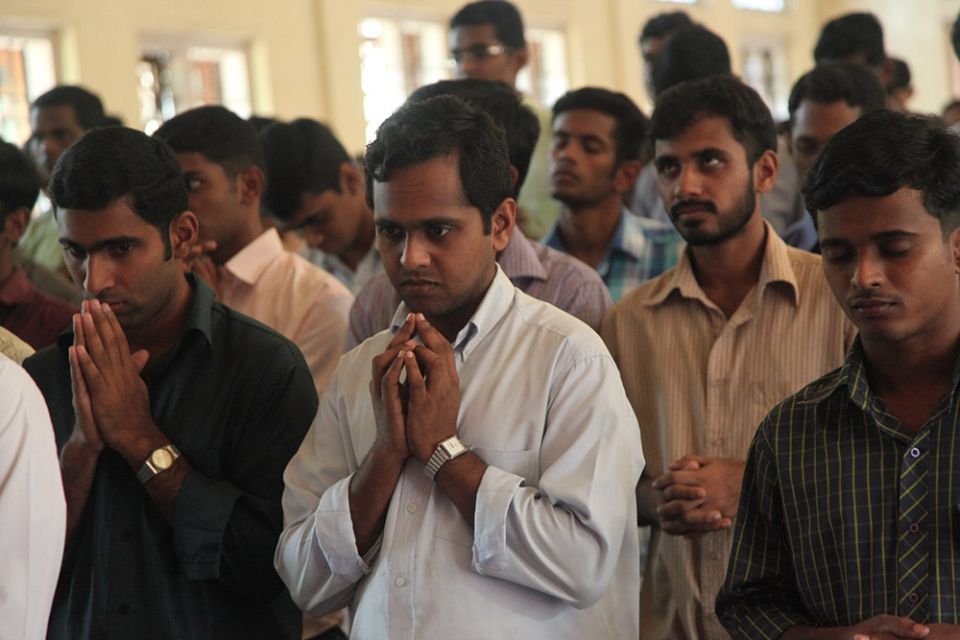 Note: It is said ‘some Christians are more Catholic than the Pope!’ This report below from the Reuters, is a typical example!

US President  has met the Pope several times! Last time he met the Pope, very recently,  he told him he is a "good Catholic" who can receive communion. Then how can the majority of US bishops say  “he is not!” That is heir dilemma, just like teen age girls!  So the majority kept silent!

Typical example in Malayalam is this: A teenage  girl was asked whether her elder sisters husband was Man or woman and her quick response was: “Niether, but My Kungangla!”, colloquial for co-brother or brother-in-law! We have to pity, some of our elderly bishops, they are just like that teen-ager!

We have written many times elaborately in CCV on Francis Papa’s views on Gay/Lesbians, abortion, communion, proselytization, Catholic God etc. to repeat here! He has also said all religions, which includes your individual convictions, are willed by God (some atheists are far better than many self-proclaimed Catholic etc.)

Very, very briefly: each of us, that includes all in the “Fratelli Tutti” (Francis) have to follow his/her “Commanding Conscience” on which Benedict xvi is very, very emphatic, except of course, “Thou shalt not kill!”, quoted many times james kottoor, editor WCV.

BALTIMORE, Md., Nov 17 (Reuters) – U.S. Roman Catholic bishops on Wednesday reaffirmed their stance that Catholics who defy church teaching without repenting should refrain from the sacrament of Holy Communion, but did not directly rebuke politicians for supporting abortion rights as some conservatives had hoped.

The matter of communion eligibility has ignited fierce debate within the church over whether politicians like U.S. President Joe Biden, who support abortion rights, should be able to receive the sacrament, which is a central tradition for the faith.

The Roman Catholic Church teaches abortion is immoral. Biden, the first Catholic U.S. president since John F. Kennedy, has said he personally opposes abortion but supports a woman's right to choose and has vowed to protect that right in the face of restrictive state laws.

The communion document bishops approved by a wide margin at their meeting in Baltimore, Maryland, does not explicitly mention Biden or any other politician by name, and does not focus on the issue of abortion. It says Catholics who exercise public authority "have a special responsibility" to follow the church's moral law.

While offering a symbolic rebuke, the document does not set forth any new guidelines that would block Biden from receiving communion. It repeats a statement the conference made in 2006, which said Catholics who "obstinately" reject the church's moral teaching should refrain from communion.

Since the bishops resolved to draft the document at their June conference, debate over what it should say has exposed political rifts in the church.

Some conservative bishops wanted it to rebuke politicians who support abortion rights and set explicit standards of eligibility for receiving the sacrament. Others cautioned against weaponizing the Eucharist and sowing further division among the church's fractured membership.

Nearly 20% of U.S. Catholics have left the church in the past two decades, according to a Gallup poll in March, as sexual abuse scandals involving predatory priests have emerged and Catholics have disagreed on social issues.

Some 55% of Catholics believe abortion should be legal in all or most cases, compared to 59% of the general population, according to a Pew Research survey conducted in April.

Bishop Kevin Rhoades, chair of the conference's Committee on Doctrine, brushed off the notion that the political debate surrounding the writing of the document had exacerbated existing division in the church.

"Perhaps the debate helped the general public know how important the Holy Eucharist is, or we wouldn't even be having debates about reception," he said on Wednesday.

The document passed with 222 "yes" votes, eight "no" votes and three abstaining. It required two-thirds of the U.S. Conference of Catholic Bishops' membership to pass.

Bishop Michael Burbidge of Arlington, Virginia, told reporters on Tuesday that the document was never intended "to target any individual or group of individuals."

The document vaguely appears to chastise politicians who support abortion rights where it states, "Lay people who exercise some form of public authority have a special responsibility to form their consciences in accord with the Church's faith and the moral law, and to serve the human family by upholding human life and dignity."

It avoids giving an explicit directive to bishops to withhold communion from Catholics who they say oppose Church teachings. It says: "It is the special responsibility of the diocesan bishop to work to remedy situations that involve public actions at variance with the visible communion of the Church and the moral law."

Biden, who regularly attends mass, met privately with Pope Francis at the Vatican last month and said afterward that the pope had told him he was a "good Catholic" who can receive communion.

Prior to that meeting, Pope Francis, whose liberal theology has ruffled many conservative Catholics since his election in 2013, appeared to criticize U.S. bishops for dealing with the issue in a political rather than a pastoral way. The pope said bishops should use "compassion and tenderness" with Catholic politicians who support abortion rights.