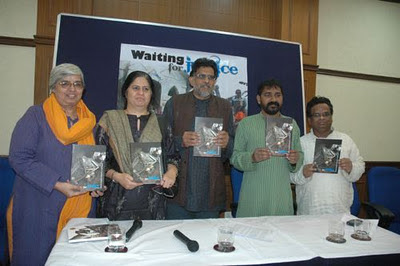 Kandhamal…! The biggest attack on the Christian community during the last few centuries in India. The victims and survivors were entirely Dalits and Adivasis! Seven years have passed after the major communal attacks in 2008. The wounds have not yet healed. The criminals are not punished and innocents are harassed! The people of Kandhamal are still waiting and struggling for JUSTICE!. An appeal to all secular, democratic forces, sensitive people from all religions, Dalits and Adivasis to observe Kandhamal Day on August 25. Let no more Kandhamal be repeated in future ! Let Peace, Justice and Harmony be celebrated! Here is the summary of a Press release.

PRESS RELEASE
A National People’s Tribunal (NPT) on Kandhamal was held in New Delhi on 22-24 August 2010, organized by the National Solidarity Forum – a countrywide solidarity platform of 56 civil society groups and concerned citizens aimed at assisting the victims and survivors of the Kandhamal violence 2008 to “seek justice, accountability and peace and to restore the victim-survivors’ right to a dignified life”. The tribunal report was made public People Convention for Justice, Peace and Secularism in Bhubaneswar on 2nd of December 2011.
The Jury Members
The jury of the NPT was headed by Justice A.P. Shah, former Chief Justice of the Delhi High Court. Joining him as jury members were Harsh Mander (member of National Advisory Council), Mahesh Bhatt (film maker and activist), Miloon Kothari (former UN Special Rapporteur on Right to Housing), P.S.Krishnan (retired Secretary, Government of India), Rabi Das (senior journalist based in Bhubaneswar), Ruth Manorama (women and dalit rights activist), Sukumar Muralidharan (Delhi-based free lance journalist), Syeeda Hameed (member of Planning Commission, Government of India), Vahida Nainar (expert on international law, mass crimes and gender), Vinod Raina (scientist and social activist with a specific focus on right to education), Admiral Vishnu Bhagwat (former Chief of Naval Staff) and Vrinda Grover (advocate, Delhi High Court).
A unique feature of this NPT was that the testimonies and depositions by victim-survivors of the violence; were supplemented by 15 expert testimonies and fact findings besides an exhibition on the situations inaugurated by Javed Akhtar, writer, poet, and lyricist was put up to recreate the scene of communal violence.
The tribunal Report titled “Waiting for Justice” is divided into four parts; a. background and context of the violence, b. impact of the violence on women, children as well as human rights, c. processes of justice and accountability and the aspect of reparations, d. major observations and the recommendations.
Communal Violence in Orissa:
The tribunal is concerned on “the targeted violence against the adivasi and dalit Christian community in Orissa violates the fundamental right to life, liberty and equality guaranteed by the Indian Constitution, and affirmed by the international covenants such as ICCPR, ICESCR, CERD ; particularly the Rome Statute of the International Criminal Court”.
It is quite alarmed that the attacks “were widespread, and were executed with substantial planning and preparation. The violence meets all the elements of ‘crimes against humanity’. It notes, “Christians who refused to convert to Hinduism were brutally killed or injured. Human rights defenders have been deliberately targeted for their role in assisting victim-survivors”.
Gendered and Children Impact: “The jury observes, with deep concern, the silence that prevails in matters of sexual assaults at various violating constitutional guarantees and other international standards, including the CEDAW”. The special focus is on the impact of Children, “Many children have witnessed horrific violence to their close family members and suffer from acute trauma with no access to services of socio – psycho support and healing”.
Role of State Administration and Public Officials: The jury members coming heavily on the role of state actors say, we “observe, with grave concern, the deliberate dereliction of constitutionally mandated duties by public officials, their connivance with communal forces, participation in and support to the violence and a deliberate scuttling of processes of justice through acts of commission and omission”.
The jury comes heavy on the Justice Process, “we observe, with deep concern, that the criminal justice system has been rendered ineffective in protecting victim-survivors and witnesses, providing justice and ensuring accountability for the crimes perpetrated. The complicity of the police and their collusion with the perpetrators during the phase of investigation and prosecution, indicate an institutional bias against the targeted Christians”.
On the Reparations, it says, ‘through the issuance of a notification prohibiting non-profit organizations from conducting rescue and relief work, the state government abdicated its constitutionally-mandated duty to protect the lives and human rights. The dismal conditions in the government-run relief camps are clearly indicative of the indifference of the State government to the plight of victim-survivors. The absence of a comprehensive rehabilitation package has prevented the victim-survivors from being restored to a life of dignity”.
Sounding alarm for the sorry state affairs for minorities in the country, the report observes, “The victim-survivor community is unable to freely practise its faith and is thereby reduced to a state of secondary citizenship – an anathema in a democracy like India with a constitution that guarantees fundamental rights”.
Major Recommendations:

Legal and Judicial Processes are prioritised in the recommendations.
• Constitute a Special Investigation Team (SIT) to re-examine the already registered FIRs for accuracy, examine registrations of fresh FIRs, the trials that resulted in acquittals due to intimidation and/or lack of evidence and recommend the trials that need be transferred or fresh trials be conducted outside Kandhamal.
• Identify unreported cases of sexual and gender-based violence and include the offence of sexual assault in First Information Reports (FIRs).
• Enquire into the acts of all public officials and pursue stringent disciplinary, administrative and other legal action against them for grave dereliction of duty, and for collusion and complicity in the crimes committed by the perpetrators.
• Appoint Special Public Prosecutors who discharge their duties with professional competence and integrity. At the appellate stage in the Orissa High Court a special panel of lawyers to represent the victims of Kandhamal violence should be constituted.
• State Legal Services Authorities to set up a legal cell to assist victims in their legal cases and interactions with the police and courts and provide protection to victims and witnesses before, during and after the trial processes.
• Accord special protection to human rights defenders and adequately compensate the damage to their residential and organizational properties so that there are no impediments to their work in assisting victim-survivors with processes of justice and reparations.
Giving Emphasis on Socio-economic and Religious-Cultural Rights, the tribunal calls for “Ensure that relief camps meet the minimum international standards of health, hygiene and privacy for Internally Displaced Persons; especially of children, lactating mothers, pregnant women in accordance with UN Guiding Principles on Internally Displaced Persons”.

“Formulate a policy / programme to urgently address the issue of institutional bias against Christian community, through a combination of perspective-building and stringent action that is intended at upholding the rule of law”.

“Review Orissa Freedom of Religion Act to ensure that it does not violate the right to religious freedom as guaranteed by the Indian Constitution and international law”.

“Review the definition of the Scheduled Castes in The Presidential Order of 1950, on the basis of the discrimination experienced by members of schedule castes even after conversion”.

On Reparations, the tribunal for “adopting, at the very minimum, the 1984 anti Sikh and 2002 anti Muslim Gujarat compensation package to enhance the compensation already announced”. ​