All for vote-bank politics! Why BJP Sings Kabir? 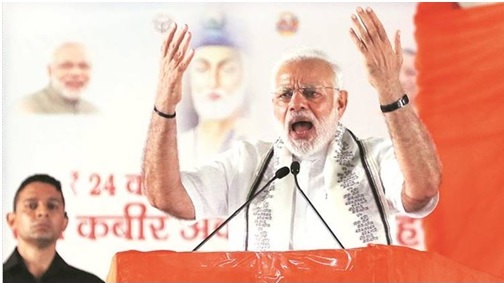 It’s part of the party’s strategy to attract Dalits and marginalised communities.

Note: BJP’s hidden or open agenda, all say, is to turn India into a Hindu  Nation. The first step to achieve this is to make the whole nation feel that they are Hindus. It is almost achieved since 80% is declared so according to statistics.

But there are some 20% or more  among the majority community who feel they are neither fish nor flesh clearly, especially the Dalits and those in the  lowest strata of society, known  as untouchables  or by different names locally and regionally and are discriminated and exploited due to caste system brutally enforced in some states in India. To these poor sections, religious identities matter very much, since they have nothing else materially or socially to boast about.

It is here that Kabir Das becomes a great blessing both for those too conscious about religion and those who care too hoots for religion or no religion at all. It is a long story how Kabir became a spiritual celebrity, a harmonizer of all religions, a  world Icon.

He was born in Varnasi in 1440 as the  child of a Brahmin woman working and praying in a temple where she got pregnant (father unknown) and died in 1518. When he grew to real spiritual heights through the vicissitudes of time and place many started to look up to him. No wonder if some try to be related to him at least for drawing benefit for their own vested interests if not for what Kabir stood for  and promoted:  universalism.

His mother had to abandon him to escape from public ridicule and providentially a Muslim woman took up his upbringing as weaver, a job of the lowly placed country folk without proper schooling even as Jesus of Nazareth was the son of a Carpenter whose paternity  is a mystery. Yet today Kabir is known as the Christ of the East, even as St. Francis of Italy  is known as the Second Christ.

What is important for us argumentative Indians today divided on ever so many issues in politics, in social relations and religious beliefs and practices, is that Kabir is a force for unity, brotherhood and collaboration. What all political parties want may be to use everything that comes into their hands to multiply votes, to gain political power, ultimately to become crorepaties in what they euphemistically call “Democracy”  by which they mean “Moneycracy” controlled by Dynastic Families.

All are driven by the court jester  Kunjan Nambiyar’s inciteful poetical exclamation: “Deepastampam Mahaschariam, namukkum kittanam panam.” (Fantastic and awe inspiring is the Light House, I too should get my share of money.) May the life and teachings of Kabir inspire our political parties to work for unity, equality, freedom, prosperity and peace,  is our fervent prayer. james kottoor, editor ccv.

Please read below the article on Kabir in Indian Express

The BJP has been appropriating religious symbols related to popular sects like the Nathpanth, Ravidasis and Kabirpanth. It is part of the party’s strategy to attract Dalits, the marginalised and backward communities. These sects have a following among the Dalits, MBCs and OBCs.

The party is also trying to co-relate Hindu symbols with those of Buddhism in order to mobilise the followers of that religion, who belong mostly to the Dalit and OBC communities.

This strategy aims to do two things. One, provide respect to icons who are key to the Dalit desire for dignity. Two, forge linkages between Hindutva and the popular sects, which were expressions of non-Brahminical upsurges at different times in the country’s history. One purpose of this strategy is to recover the trust of the Dalits and marginal communities that was lost as a result of incidents like Rohith Vemula’s suicide, cases of atrocities against people of these communities and the bitterness over recent developments on the reservation issue.

Prime Minister Narendra Modi visited Maghar, the place where Kabir was cremated, to observe the 620th Prakatya Diwas and the 500th death anniversary of Kabir. He laid the foundation of the Kabir International Academy — conceived as a study, research, publication and exhibition complex devoted to Kabir’s life and teachings. The PM’s speech underscored how the symbol of Ram was important for Kabir. This is one way the BJP is trying to woo the Kabirpanthis.

Communities of Julahas, Tantis, Kovids, Koris, and Jogis, who live in a region stretching from Punjab to Bihar and Bengal, are known to be traditional followers of the Kabirpanth. They are called “Vayanjeevi”, the conglomeration of weaver communities. The Kabirpanth later became popular among the Jatavs and MBC and OBC castes in UP, Bihar and Madhya Pradesh. In UP, about half of the Jatav community could be Kabirpanthis and the rest are followers of Ravidasi sects. Kabir is also venerated by backward agrarian castes like Kurmis, Kushwahas, Kunjars, and Paneris.

The cultural artefacts centred around Kabir — rhymes and folk songs — are also popular among a wider section of the rural population. Marginal Muslim socio-religious groups also associate with the symbolism around Kabir. In many UP villages, the same Kabir song could be sung in a Jatav chaupal or a Brahmin baithak.

Weaver communities, such as the Koris, which are part of the Hindu fold, and Ansaris who are Muslims, are known to support the BSP and Samajwadi Party in UP, especially in the areas adjoining Gorakhpur and Varanasi. By appropriating Kabir, the BJP intends to attract the communities that follow the Kabirpanth. UP Chief Minister Yogi Adityanath has already emerged as a strong Hindutva icon who can mobilise Nathpanthis in different parts of India.

This politics of symbols will not only help the BJP build up a votebank but also help the party develop a cadre base comprising people of these sects. In the recent elections to the Karnataka assembly, cadres drawn from the Nathpanthis and some other religious sects worked for the BJP. In the Nineties, maths of the Kabirpanthis were sources of goodwill for Kanshi Ram, Mayawati and the BSP.

The BJP is trying to broadbase its support base by drawing in Dalits, OBCs and some tribal groups. In this endeavour, the party is appropriating the symbols of these groups. Religious dignity matters much to marginalised communities. It plays an important role in shaping their social interactions. That’s why the BJP’s strategy to mobilise these communities gives much weightage to their religious icons . The party is trying to appropriate the icons who strove to create an egalitarian society, into the Hindu fold. The BSP had earlier used this strategy for mobilising marginal communities. But the BJP endeavour is different. It is an attempt to make affix a Hindu identity to these communities.