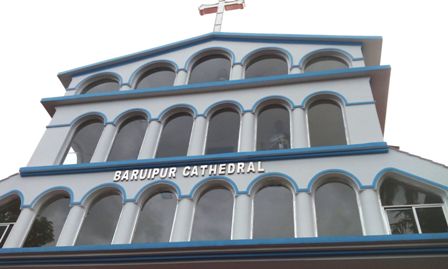 On Sunday 11th September along with my friend from Mumbai Ladislaus L.D’Souza (Pauline Cooperator, ICPA member and a prolific writer for The Examiner, The Secular Citizen, Indian Currents and In Christo), I visited the Cathedral of Immaculate Heart of Mary and Blessed Teresa at Baruipur.  This happens to be the only church inaugurated by the Missionaries of Charity's Superior-General Sister Prema, on 12th November 2009, at a solemn function attended by the then Archbishop of the Archdiocese of Calcutta Lucas Sircar and Bishop of Baruipur Salvadore Lobo. We were very fortunate to meet Bishop Lobo who had just returned from the Canonisation of Mother Teresa in the Vatican.  The Bishop was very kind to show us around the Cathedral. "While the cathedral's Chief Patroness is the Sacred Heart of Mary, the Co-patroness is Mother Teresa. This is the first cathedral in the world where she is the co-patroness," the Bishop said. He explained in detail the special architecture (the Romanesque exterior, without any pillars!), the 24 oil-paintings on the ceiling in two rows of 12 – each representing the miracles and parables of Christ, the 32 stained  glass paintings depicting the History of Salvation, the big portrait of the Last Supper at the exit, the melodious church bell donated by Austria (world’s best church bell makers – as per Bishop Lobo he did not have to pay for the transportation of the bell and even the custom duties were waived off), the full-oak statue of Mother Mary (in the chapel) made in Spain and the special tabernacle gifted by Late Sister Nirmala as a token of gratitude for Bishop Lobo having been the Chief Postulator for Mother Teresa's cause for canonisation.  On September 4, a statue of Mother was placed at the entrance to the cathedral to mark the beginning of celebrations that will last the whole of September. What we saw was beauty in its simplicity without the Bishop (who has built 12 churches), compromising on the workmanship which was done totally (including the oil paintings on the ceiling and stained glass art-work) by local craftsmen mainly from Kolkata. The Bishop also took us around his huge garden where he has planted many rare trees.  He plucked natural cherry for us and showed us the “Monkey’s Tail”, a special plant. He also showed us varieties of cactus plants including the costly version of Aloe Vera plants which has tremendous medicinal properties. The icing on the cake was lemon grass tea. The Bishop himself plucked this grass (called Dhanwantari in Bengali) and said tea made from this was a delicacy for VIPs!  The tea was out of the world!

The Bishop believes in quiet  work without any fanfare.  He spoke about a lot of silent yet sustainable social work being done at the grass-root level through P alli Unnayan Samiti and the Family Commission. We heard of Narendra Modi’s  'Swachh Bharat Abhiyan' now but the Bishop had pioneered this concept – a sanitary toilet for each family – in his diocese many years ago through the Family Commission which also tirelessly works for keeping families together and reconciliation of broken families. The beneficiaries are mostly non-Christian residents who are also great devotees of Mother Mary and Mother Teresa. The Bishop said that he is stunned at their devotion.  When he asked a few of them the reason for their devotion, they said that Mother Mary grants their prayers (Photo: Statue of Mother Teresa in the chapel). The Bishop used this phrase pointing at the portrait of the Last Supper. He said before the last supper Jesus washed the feet of his disciples urging them for servant leadership: “Go out and serve the world.” This is the justification for putting up the portrait at the exit for visitors to carry home the message of "service" before they leave the Cathedral). The diocese covers 10,568 square kilometers, of which 3,075 is forest land. It is located in the southern part of West Bengal state, comprising the whole of South 24 Parganas district with its 3, 470 villages, six municipal towns and 32 non-municipal towns,as well as small parts of Kolkata and North 24 Parganas district. Two parishes are in Kolkata. Shaped like an irregular rectangle about 120 kilometers north-to-south and 90 kilometers east-to-west, the diocese serves the Indian part of the Ganges delta. State Highways 1 and 3 run through this district, as does the Eastern railway line. Ferry services also are an important mode of transportation in this district. (Photo shows Bishop Lobo minutely supervising the work during  the construction of the cathedral) The total population numbers around 8,890,000 people, of whom 85 percent live in villages. The small urban part of the diocese, only 10 percent of its area, is concentrated in a narrow belt that borders the Hooghly River. Most of the people are dalit, belonging to groups at the bottom of the traditional Indian caste system. Youths below the age of 20 dominate the population. Tribal people account for about 2.2 percent of the population. (The full oak-tree statue of Mother Mary from Spain).