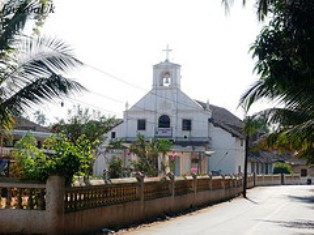 Margao (Matters India): The anger in the Margao Judicial Magistrate First Class (JMFC) was visible when family, friends, neighbours and well-wishers of the 22 accused in the Velim Church raid incident gathered outside the court to offer solidarity to the accused on Monday. It was the second black day for them after the infamous incident on February 25, 2012. They were forced to make a court appearance like criminals.

The recent assurances by Chief Minister Laxmikant Parsekar to ensure that the case is closed have been their last hope and that hope was put to the test at the packed Margao JMFC. Velim MLA Benjamin Silva, who was present at the court, was hopeful that the matter will be sorted soon and recounted Parsekar’s promise.

The faces of the accused conveyed disappointment and disillusionment. One of those faces belonged to a high-ranking priest, the South Goa Episcopal Vicar Fr Lucio Dias.

Fr Dias protested his innocence while interacting with media persons outside the court. Well-known trawler owner union leader Patrick D’Silva’s comments on how they have been wrongly accused summed up the mood of the lot. Like Fr Dias, he spoke about how he had helped the police in the presence of media persons, who can verify his account. Mario Rebello also swears how Patrick rushed to the site from Assolna only to arrive after the incident. With the onset of the fishing season, half of Patrick’s mind is on his job, while the other is preoccupied with the case.

His fellow accused have similar problems. Agnelo Da Silva, who runs a cyber café, laments that a day spent away from his office means a day of no business. Adlete Mascarenhas was dejected to hear that the case has been adjourned.

To add to it, the accused were forced to shell out Rs 10,000 each as a bail bond. Retired seafarer Max Colaco, disgusted with the turn of events, questioned why he had to pay the bond when he was watching TV at home during the incident.

Attending the court hearing was physically excruciating for some senior citizens, as they had to climb stairs to the court room twice.

The case also exposed the shoddy investigations by the Cuncolim police. For starters, the police failed to verify the name of the 26 year old accused Angelo Silva. He was not the only accused whose name was spelt wrongly. The people wondered what kind of investigations took place if they could not get the names right. Many of their surnames and addresses are also wrong, due to which some of them didn’t receive their summons.

What is truly exasperating is that Angelo, son of a referee Benjamin Silva, was attending classes in Pune during the incident and has his attendance register to prove his innocence. He explained that he had no clue about the incident and was perplexed to find his name in the second list of accused.

The second list names 22 people, including two priests, whereas the first names a priest, seven persons and 1,500 unknown persons.

If people have two questions, one is on why no thorough investigation had been done immediately after the incident and how only 22 people were selected from the large number of 1,500. Darwin D’Silva does not find this funny, as he has been without a job since the day his brother Desmond was named along with the original seven persons.

Desmond was on a ship during the incident and had to show his travel documents to get his name off the list. 28-year-old Darwin has been deprived of a job since February 2012 and has been sitting at home ever since.

When his brother’s name first featured on the list, there was confusion as there were many people by the name of Desmond. He was stunned to find his name on the second list. His inability to get a job because of the court case has left him traumatised.

Incidentally, advocate Rajeev Gomes, who is representing some of the accused, had represented Darwin, who finally got legal respite and was about to set sail when he was named as an accused. He was back to square one without a job.

Frederick Borges, who was also present in the court, said the villages of Velim constituency would be ready to support the accused and ensure that their versions are accepted in the court.