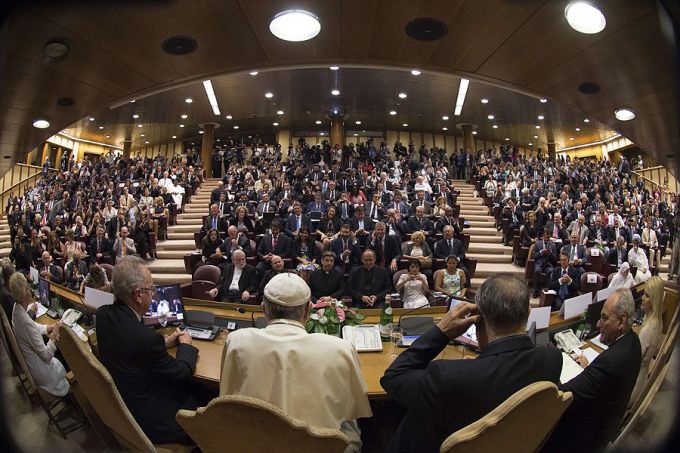 By Ann Schneible. Vatican City, Jul 26, 2015 / 06:03 am (CNA/EWTN News).-Drawing dozens of mayors from major cities worldwide to discuss the link between slavery and climate change, this week's Vatican conference showed how secular leaders are responding to Pope Francis' lead in protecting the environment – and, more importantly, the vulnerable.

“The Church has a role to protect the vulnerable, and if we follow the words of the Pope, we actually bring into account those who create the suffering of others,” said Kevin Hyland, United Kingdom Independent Anti-Slavery Commissioner and one of the speakers at the gathering.
In an interview with CNA, Hyland said the pontiff has shown his leadership in bringing together the themes of slavery and climate change, as demonstrated by his ability to draw together international leaders to confront the issue.
“Pope Francis talks about it in a way that people understand. He's talking about it in the terms of human lives: That fact that we are exploiting not just people now, but the future, and if we don't act now in this current time, we are destroying the world for the future generation.”
Hyland was one of the speakers in the July 21 workshop in the Vatican entitled “Modern Slavery and Climate Change: the Commitment of the Cities,” during which dozens of mayors from around the world were invited to present on the theme of climate change and slavery.
Vulnerable people, he explained, become targets of slavery when they are unable to sustain themselves, be it the result of conflict or disasters – including those brought about by climate change.
These individuals, he said, “then become the very commodity that criminals that exploit people through modern slavery target.”
“Climate change and modern slavery are very much linked because it is the climate change that is creating the environment for criminals to actually find their commodity, which is human beings who are displaced because of the climate change.”
Tuesday's workshop was part of a July 21-22 symposium sponsored by the Pontifical Academy of Social Sciences (PAS), titled “Prosperity, People and Planet: Achieving Sustainable Development in Our Cities.”
The theme of the conference represents the Pontifical Academy of Social Sciences' current review of  “Sustainable Development Goals” (SDGs), a project in which Hyland is taking part.
He is also a member of the Santa Marta Group, launched by Pope Francis in 2014, which is an alliance of international police chiefs and bishops from across the world who work together with civil society to eradicate human trafficking and provide pastoral care to victims.
On Tuesday, Pope Francis addressed the participants, touching on various themes such the issue of human trafficking, which he said can be a “rebound effect” of environmental degradation. The Pope will address the United Nations during his tour of the United States in September.
Remarking on the pontiff's address, executive director of the C40 cities climate change group Mark Watts, told CNA he was struck by the connection drawn between climate change and slavery.
“I think it was that message of: if you want to make the world a better place right now, and you want to tackle climate change, there is one thing you have to do, which is tackle inequality,” Watts said.
The Pope in his speech showed how “the effects of climate change that we are already experiencing is causing a big increase in migration as people flee areas where life is no longer sustainable,” Watts said.
“Those people are often the ones that fall into the trap of slavery and are exploited.”
The two-day symposium gathered some 65 mayors world wide, as well as other leaders, in light of the difficulties which urbanization brings to cities and rural areas alike.
Speaking on climate change, the Mayor of San Jose, Sam Liccardo, told CNA the reasons he is following the lead of the Pope – a spiritual leader – on matters which pertain to science.
“It seems to me that this is an issue where we critically need leadership from Pope Francis,” he said. “In order to spur the political will, we need him.”
“The science is largely undisputed at this point. There is a broad consensus among scientific experts. What lacks is political will, and we need leaders that are able to inspire people, to be able to make tough decisions, critical decisions for us for the future.”
Fellow Californian, governor Jerry Brown, who took part in the meetings, told CNA that this week's conference was an important step bringing global awareness to the issue of climate change.
“This conference is important as a call to action for mayors here, and for mayors and governors and presidents throughout the world,” Brown said.
“The big point is that the magnitude of the problem that climate change represents is juxtaposed with the complacency, the indifference, and the lack of real understanding,” he added.