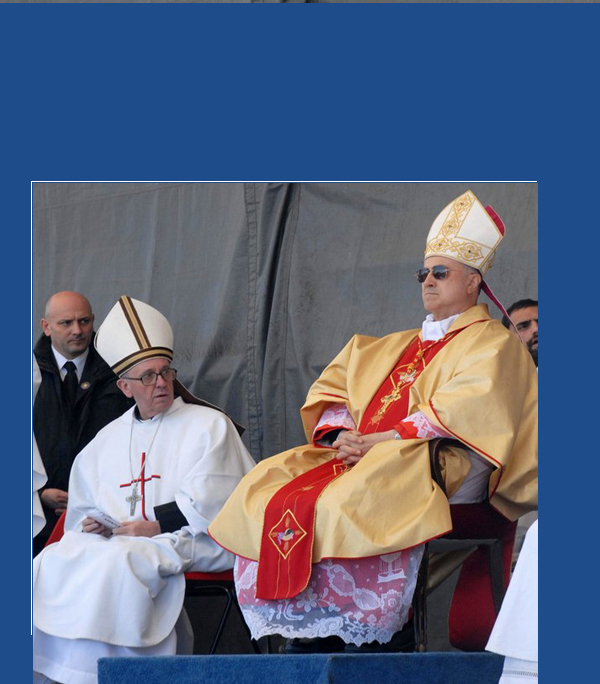 In the photo above, Cardinal Jorge Bergoglio (before his election to the papacy), wearing simple vestments, looks at Cardinal Tarcisio Bertone’s richly embroidered vestments

(The following article is prepared in response to an article 'We’ve discovered hundreds of millions of euros off the Vatican’s balance sheet, says cardinalGeorge Pell' published in Mumbai Laity dated 3 December 2014 – Editor)

In an article dated 3 December 2014 published in Church Worldwide News (Mumbai Laity) it was reported that Cardinal George Pell made a candid disclosure in an exclusive article in the Catholic Herald magazine that Vatican reformers have discovered hundreds of millions of euros that did not appear on the Holy See’s balance sheet.  The Cardinal is charged with sorting out the Curia’s financial affairs.

While the Cardinal must be complimented for his honesty and courage to admit a lapse, supposedly accounting, it is very strange that" hundreds of millions of Euros were tucked away in particular accounts and did not appear in the balance sheet".  This so called lapse is all the more glaring, especially when top audit firms are appointed to carry out the audit of the Vatican Bank which is also known as the Institute for Religious Works (IOR) .

This must be the height or nadir of modern accounting standards. For if the money was shown in some accounts (whatever head it may have been, even Suspense Account), it should have been reflected in the Balance Sheet.

Does it imply that the previous Auditors should be pulled up for this “discovery’? To clear their name, they should come out with a proviso that this amount was not disclosed to them and was held in unaccounted for cash . Didn’t their Audit Report say : “We have examined the Balance Sheet as at …..and the Income & Expenditure Account for the year ended …. of M/s………………………………. We certify that the Balance Sheet and the Income & Expenditure Account are in agreement with the Books of Accounts and Receipt & Payment Account maintained at the Registered Office at…………………………..…………………………………………………….” “We have obtained all the information and explanations which, to the best of our knowledge and belief were necessary for the purpose of the audit. In our opinion proper books of accounts have been kept on cash or ……………….basis by the assessee”?

The Auditors by  virtue of their statutory position must be privy to all the bank accounts of the Vatican. So what does Cardinal George Pell mean by stating “hundreds of millions of euros tucked away in particular sectional accounts” ?  It must therefore be inferred from Cardinal Pell's confession that the amount was deposited in some private bank accounts (somebody from the Curia) and not disclosed to the Vatican Auditors. Or it was hard cash stashed away in a secret vault.
If it was discovery of hundreds of millions of euros in cash, a part of it could be the covert return of 15 million euros invested by Cardinal Tarcisio Bertone once widely tipped to succeed Pope Benedict.  The “sumptuous” Apostolic Palace at Casa Santa Marta as Bertone's retirement benefit is already an eyesore for the Catholic Church which the Pope has repeatedly urged to be a “poorer church” .
Two years ago, the Vatican bank invested 15 million euros in an Italian television company called Lux Vide SpA, that makes family movies, including films about popes and a series about a bike-riding country priest who helps police solve crimes. The Vatican’s then Secretary of State Tarcisio Bertone had ordered the investment.  Bertone, who was the second-in-command to former Pope Benedict, pushed the deal through despite objections from the bank’s director and board members (according to current and former bank executives), who thought the expense was too big and not justified for the bank.
The Vatican booked a loss for the entire amount spent (read given away to Cardinal Tarcisio Bertone, a Salesian), as part of a wider review of its finances that has also led to the closure of hundreds of accounts at the bank.
The Cardinal's sleight of hand in matters of finance is being followed by the Salesians of India. In Calcutta one Parish Priest (known to have a huge stomach for big money and big construction projects), was allowed to escape from his parish, very early in the morning with his bag and baggage, after a lot of controversy – financial and strong arm tactics in cahoots with the ruling party, on outspoken parishioners.  He sudden vanishing act, without any handover of accounts and assets, was aided and abetted by his Provincial who too got transferred almost simultaneously in June 2014. The next parish priest has taken over (in July  2014) without any official handover.  This has been done in gross violation of the Guidelines dated 6th December 2011, issued by the erstwhile Archbishop of Calcutta, Lucas Sirkar, sdb, for handing over charges by Parish Priest / Priest-in-Charge / Principal of the Archdiocesan Institutions:
1.       The VG, Dean or a representative of the Finance Committee is to be present during the handing over of the office.
2.       An inventory of the parish/ institution/ Office is to be made by the outgoing priest. This will include furniture, electrical fittings, crockery, cutlery, cooking utensils, vehicles etc. The inventory will be checked by the new incumbent as he takes over.

3.       Land documents, files (including minutes of meetings, newsletters, etc.) registers, bank books, vehicles, previously audited statements, bills and documents connected with electricity, land tax, project files, papers relating to on-going projects, should be listed and handed over the new incumbent by the outgoing priest. It is preferable that the auditing of the accounts is done and a copy is given to the new incumbent and to the Financial Administrator of the Archdiocese and a copy is kept with the out-going Parish Priest / Priest-in-Charge / Principal.

4.       It is understood that all claims from the Parish / Institutions will have been expressed and settled before the incumbent leaves office. No claim from the incumbent after the handover may be entertained.

By overlooking the above protocol issued by the Archbishop from its own community, the Salesians of Calcutta has ensured that the previous parish priest will always be allowed to run away with the booty (Laity’s money) and the new incumbent will start with a ZERO BALANCE! The Cardinal may have gone but his financial acumen lives on!
Truth is stranger than fiction.  While the Vatican seems to be falling from frying pan to fire, the CBCI as always keeps mum on issues of transparency and accountability like implementing the financial reforms initiated by our Pope, the one-man army!