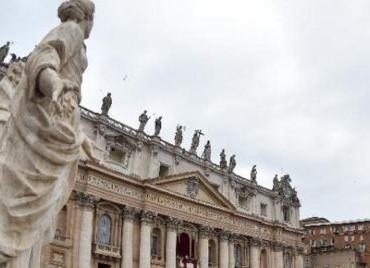 (Note: How old is  priesthood, I mean the theology of priesthood? Just as old as baptism. How old is baptism? Sacraments started popping up one by one only from the 4th century after Constantine institutionalized the Church. Theology developed after theologians started dreaming up their  thinking on God, sacraments etc. They spoke of  Royal priesthood communicated to all through baptism and its threefold functions are ruling, teaching and sanctifying. Teaching used to be called the

doctrinal mission. This scribe had to write a voluminous thesis on the doctrinal mission of the laity(sounded a little heretical at that time) to get his doctorate in theology some 50 years ago. Royal priesthood is something given to all baptized, men and women, so  not only to religious brothers but also sisters. Every follower of Jesus is to be called a brother or sister. Everything else upwards, priest, bishop etc are creations of ecclesiastical establishments. Jesus disowns all of them when he says categorically in Mt.23, “You are not to be called, Rabi, Father, Teacher  but brothers and sisters.” Brotherhood and sisterhood in the family called humanity with God the Father is what Jesus envisioned for the whole of humanity. Everything else created by man were created to Lord it over others which Jesus roundly condemns. So be happy to be called brother or sister because they  are the birth right of every follower of Jesus. james Kottoor, editor)

Vatican City The Vatican has roundly affirmed the vocation of the lay religious brother in the Catholic church, saying that men — and women — who are not ordained as priests still exercise a daily priesthood in their work in the world by the fact of their baptism.

In a long-awaited document dedicated to the vocation of men who serve in religious orders but not as priests, the Vatican says the first title Jesus assumed for himself and for his disciples was that of brother.

“Jesus Christ first of all became brother, shared our flesh and blood and was in solidarity with the sufferings of his brothers and sisters,” states the document, released by the Vatican’s congregation for religious Monday. “This is the title Jesus gives his disciples after his Resurrection.”

“The Religious Brother, living his lay state through a special consecration, is witness to the value of the common priesthood received in Baptism and Confirmation,” it states earlier. “His religious consecration is in itself an exercise in the fullness of the priesthood of all the baptized.”

“Rooting his life deeply in God, the Brother consecrates all creation, recognizing the presence of God and the Spirit’s action in creation, in cultures and in daily events,” it continues. “Because he recognizes this active presence, he can proclaim it to his contemporaries,” it states. “This ability is the fruit of an ongoing process of openness to God through consecration, that is, through the daily experience of his baptismal priesthood.”

The new Vatican document — titled “Identity and Mission of the Religious Brother in the Church” — focuses on the role non-ordained men play in various religious orders around the world. Commonly referred to as brothers, such men do not receive priestly ordination but are normally consecrated or anointed into a life of service with their order.

The Vatican estimates that such men make up about a fifth of all male religious in the global church. Catholics in the U.S. may be familiar with brothers in the large Jesuit or Franciscan orders, or in orders dedicated only to brothers, such as the Christian Brothers of De La Salle or the Marist Brothers.

Monday’s document had been known to be in development for years by the Vatican’s Congregation for Institutes of Consecrated Life and Societies of Apostolic Life, but had been rumored to have been delayed several times over disagreements over how the role of the brother would be explained in relation to that of the priest.

The released document does not exactly address that issue specifically, but rather affirms that brothers, while not ordained as priests, can serve priestly roles in their various ministries of service. It also states that its reflections about brothers can be equally applied to women religious in the church, commonly known as sisters, because of the similarities in their vocation and work.

Fifty-four pages in length, the document addresses the identity of the religious brother in three ways: First, as a mystery of a gift received; second, as a communion of a gift shared; and, third, as a mission of a gift to be given away.The document addresses the idea of the baptismal priesthood in each of those three sections, speaking of brothers’ communities that develop that priesthood and emulate the ministry of Jesus, “the Good Shepherd.”

At one point the document compares the priesthood exercised by the religious brother with that exercised by the “committed lay Christian.” “The Brother develops his baptismal priesthood through brotherhood,” the document states. “Through it he becomes a bridge between God and his brothers, anointed and sent by the Spirit to bring the Good News of the love and mercy of God to all, especially to the least of his brothers, the weakest members of humanity.”

“The Religious Brother and the lay Christian who is committed in secular society live the universal priesthood in different ways,” it continues. “Both express the complex richness of this priesthood which implies closeness to God and closeness to the world, belonging to the Church as servant of the Lord and to the Church which is built in the world, for God.”The document also calls brothers’ communities “a prime manifestation of the baptismal priesthood.”

“The community organizes its life so as to be able to see the action of God present in its daily life and to discover the history of salvation that is being fulfilled every day,” it states. “In the same contemplation, the community discovers itself as a mediator in the saving action of God. It gives thanks, celebrates and offers itself to continue, as a useful instrument, in the history of salvation.”

“The substance of the priestly offering of the community is the very same reality of the Brothers, with the limitations, poverty and weaknesses of each one,” it continues. “The Brothers build the community through the joyful gift of themselves. It is a eucharistic experience, by which they are joined to Christ in his offering to the Father, to continue his redemptive work through their community.”

In its section on the mystery of the gift received by brothers, the document says that by their consecration religious brothers express “that the mystery of Christ the Savior is being fulfilled here today, in this world and through the Church today.”

“Therefore consecrated people should frequently ask themselves how to be witnesses of the Lord today,” it recommends. “What kind of presence should we live so that the Lord Jesus can be seen, experienced, by people today?”The document also speaks movingly of the brothers’ mission in the church, using evocative imagery from both the Gospels and the Old Testament, such as: Jesus’ sharing of bread, his wearing a towel to wash the feet of the apostles, the Good Shepherd who seeks the lost sheep, the Good Samaritan who helps the person in need, and Moses declaring the “covenant of the people.”

The brother’s mission, it states, “is not ‘what he does’ but rather his very life itself made communion with the least.” “More than in external works, the mission consists in making Christ present to the world through personal witness,” it continues, saying that ministries “may vary or even disappear because of illness or old age, but the mission always remains.”

“It is, therefore, not a question of task but of identity,” states the document. “The minister is the whole person of the Brother: consecrated, member of a community, identified with the mission. All of him assumes the privilege and responsibility of representing the Church to the Good Shepherd who gives his life for the sheep.”

Towards the end of its reflections, the document proposes five different types of prophecy religious brothers might practice in today’s word: hospitality, “the meaning of life,” “the affirmation of feminine values,” care and protection of life, and “wise use of new technologies.” On the third type, the document suggests brothers can emphasize the role of feminine values “in the history of humanity.”

“Female religious have a main role in providing the feminine vision of life, thereby opening new horizons for evangelization in general,” it states. “Religious Brothers contribute to deepening this prophetic aspect with their fraternal support and their appreciation of the presence of women, religious and lay, in evangelization.”

The document ends by calling on the global church to value the “new wine” represented by religious brothers by making new wineskins “to ensure that this new wine not only is not lost, but can mature in quality.” “Pastors and the hierarchy of the Church are encouraged to promote knowledge and appreciation of the Religious Brother in the local Churches … ensuring that Religious Brothers and Sisters participate actively in the organs of consultation, decision-making and implementation within the local Church,” it states.

The new document was released by the Vatican Monday in several languages, but is as yet unavailable online. It is signed by the head of the religious congregation, Cardinal João Braz de Aviz, with the date of Oct. 4, the feast of St. Francis of Assisi.