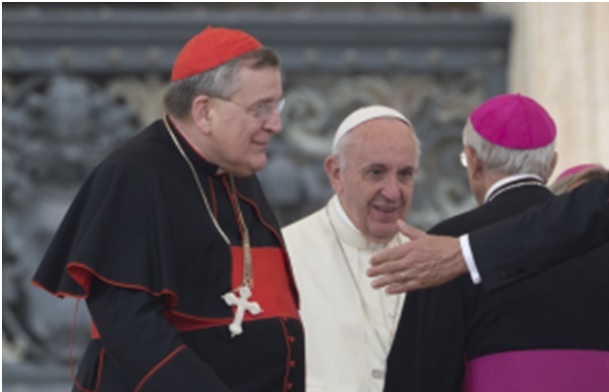 Cardinal Burke, left, with Pope Francis during papal visit to the US in Sept 2015

Abortion most important because 'it is systematic murder of human beings at their most vulnerable', cardinal asserts

(Note: Even prominent Church men are divided among themselves on the Triumph triumph in US. Prominent among them is  US Cardinal Raymond Burke who once headed the Church’s Supreme in Court in Rome. He was very critical of Francis’ open door policies and commented that the church has become a rudderless ship. After such comments he was demoted from his high post to a largely ceremonial role as Patron of the Order of Malta.

He was popularly known as “Christmas Tree” for his make up, dress up and public show in glittering colours. Pope Francis described   such bishops “peacoaking” to attract  public attention. Being a spokesperson for the conservative wing in the Catholic Churcch he always stood stoutly against abortion while Francis is alwlays a defender of the poor, marginalized, refugees and migrants. Abortion issue itself is a disputed subject both in church and civil socity. Theologians discuss when a conceived fetus becomes a person, instantly or after weeks. Civil society generally forbid abortions at the later statges of pregnancy but permit it in initial stage.

Now Burke has found a strong ally in Trump who trumpets against all abortions and so he may  be joining him to regain his lost attention. During the presidential campaign, Francis had even questioned the Christianity of Trump who wanted to build a wall to prevent Mexicans from entering the US. So let the discussion continue to enlighten ordinary folks both in church and society. james kottoor, editor).

A prominent United States’ cardinal has welcomed Donald Trump’s election as president this week saying that the president-elect's stance on abortion made him a better choice for the White House than his Democratic rival Hillary Clinton.

Cardinal Raymond Burke, former head of the Church’s Supreme Court and based in Rome, said that the president-elect was “undoubtedly” preferable to Clinton pointing out that abortion was the acid test for voters and more important than than welcoming refugees or helping the poor.

Speaking to The Tablet, the leading conservative cardinal saying there is no “moral equivalence” between abortion and the welfare of migrants, quoting guidance by then Cardinal Joseph Ratzinger in 2004 to the United States’ bishops who said there could be “legitimate diversity of opinion” about waging war and applying the death penalty but not on issues like abortion or euthanasia.

“I am very happy that my fellow Americans have chosen a new president, and given him a strong mandate to address resolutely the corruption that has beset the federal government in recent years,” Cardinal Burke said.

But in an interview with Eugenio Scalfari of the Italian newspaper La Repubblica conducted on the eve of Tuesday's election and published on Friday (11 November) Francis urged Trump not to forget the poor, while back in February he appeared to question America's next president’s christianity, making clear his disgust at his pledge to build a wall between the United States and Mexico to prevent migrants crossing the border.

“I do not judge people or politicians,” Francis told Scalfari when asked what he thought of the man who would be elected president the following day. “I only want to understand what suffering their behaviour causes to the poor and the excluded.”

The Pope has made care for migrants and those suffering the hallmark of his papacy: this weekend he is welcoming the homeless into the Vatican and has said Christianity should be judged on how it treats outcasts.

Cardinal Burke – who was moved by Francis from the Apostolic Signatura tribunal to a largely ceremonial role as Patron of the Order of Malta – explained that while refugees should be treated with care, a “prudential judgment” should be made by countries about how many migrants they welcome.

“We do need to draw a distinction between a migrant and a refugee. How many economical migrants a country accepts is a prudential matter, about which people in good faith are free to disagree,” he said. “One’s heart must always be open to the genuine refugee, fleeing death, terror and persecution, however.”

The cardinal went on: “I do not see any moral equivalence between abortion, and the welfare of migrants. I hope it is obvious that I think migrants, made in the image and likeness of God like you and me, should be treated with every care and respect. But to put the two issues on the same plane is simply wrong (as the Church clearly teaches).”

Abortion, he stressed, “is the systematic murder of human beings at their most vulnerable stage of development — we need to remember that”. Trump has said he is "pro-life" saying that he opposes terminations except in cases where conception occurred because of rape or incest, or when the life of the mother is at risk. During her campaign Clinton was very clear that she was a supporter of legal abortion.

The cardinal, a former Archbishop of St Louis, made headlines during the 2004 presidential election campaign by announcing he would deny communion to John Kerry and other Catholic politicians who supported legal abortion. Back in 2008, after his appointment to his first Vatican post, he suggested that the Democrat Party was turning itself into a “party of death” due to its stance on bioethical issues.

While the Democratic Party has traditionally fared well among Catholics – President Barack Obama won the Catholic vote in both of his elections – Trump carried the Catholic vote by seven percentage points from Clinton.