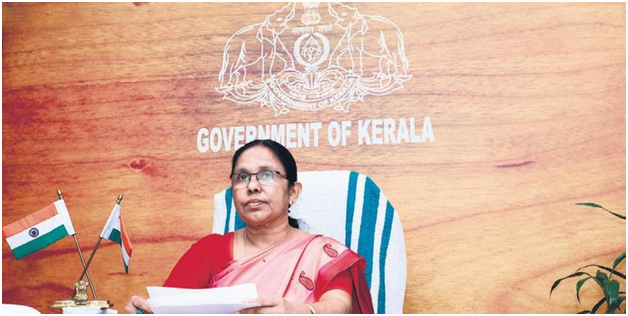 The United Nations gave recognition to the achievement of the state in fighting  Covid-19 on its Public Service Day, celebrated on June 23.  Published: In New Indian Express, 24th June 2020.

In the pic: K K Shailja attending a panel discussion hosted by the UN.

A bit of good news for Kerala, India amid all bad news Corona is spreading all over the world.Let this streak of light overcome the engulfing the darkness! Let it spread to the four ends of the earth. Possible, where there is a will, to follow the light! jk.

It is the United Nations speaking below!

THIRUVANANTHAPURAM: The United Nations gave recognition to the achievement of the state in fighting  Covid-19 on its Public Service Day, celebrated on June 23. Health Minister KK Shailaja was the lone speaker from the country to speak about the strategies adopted by the state.

At the webinar streamed on UN Web TV, she shared her views along with the Secretary- General of the United Nations António Guterres; President of the  General Assembly Tijjani Muhammad-Bande; Minister of Interior and Safety, Republic of Korea Chin Young; Director General, World Health Organization Dr Tedros Adhanom Ghebreyesus; President of Ethiopia  Sahle-Work Zewde and senior officers of the UN. The event was organised to honour leaders who have done commendable work in the fight against Covid-19.

The moderator, Odette Ramsingh, who is executive director of Sefako  Makgatho Health Sciences University, hailed Shailaja for low mortality rates in the state due to early intervention. She mentioned the title ‘Corona slayer’ as used by some of the international media to invite the health minister for the talk. The health minister spoke about how the experience in containing Nipah outbreak in 2018 and floods helped the state prepare and fight Covid-19 at the beginning itself.

“By drawing strengths on the decentralised public health delivery systems in the state, we activated our entire surveillance network the very next day of WHO’s statement of caution on a respiratory virus of pandemic potential,” said Shailaja.

According to her the focus was set on minimising the spread and mortality. She said the state managed to   contain local spread. She explained the three strategies adopted  – “Trace, Quarantine, Test, Isolate and Treat”, “Break the Chain” and “Reverse Quarantine.”