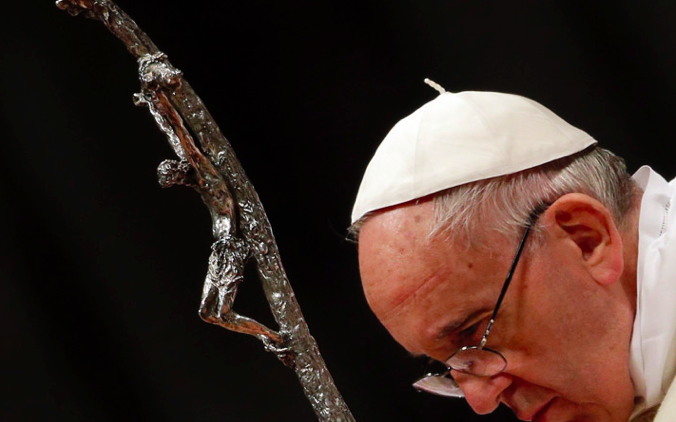 Share on TwitterShare on Facebook àcomment on this storyu 203 (Note: Fracas is a popular pope who speaks to all kinds of people on the spur of the moment, most of the time from the heart, not from written text. For that reason he is applauded and misunderstood by his own people, both criticized and approved. For example what is one to understand when he says: “My God is not Catholic…. Who am I to judge homosexuals….. I am a sinner….. Go out and make a mess”(to youth) etc. If former Popes were too concerned about liturgy, worship, doctrine, Francis is totally  different, he is an extrovert, imitating Jesus, telling “leave your offering at the altar, go first get reconciled to the one who has something against you, not the one against whom you have something.”  Francis is a pastor par excellence, whose first concern to save the dying – the divorced, civilly married, cohabitating, homosexuals etc. – not those with minor wounds in the field hospital which is the Church.  This is what the writer John Allen is trying to explain. Most of the Christians are inward looking, ghetto catholics, they have to get out of their self- created tombs, just as  Jesus got out of his sealed tomb, to become one of the risen people. Hence his constant plea ever since he became Pope:”get out of the

Church of the sacristy and go to the peripheries to meet strangers,  wounded on the road, drunkards, drug addicts, the poor and hungry to feed them  as Jesus did. That is living Christianity living without a
ny border, open to all and embracing  all irrespective of their colour, country creed. james Kottoor, editor)

ROME – For more than a quarter-century, from 1978 to 2005, St. John Paul II was one of the most popular figures in the world, with high poll numbers and adoring crowds. To this day, his funeral Mass eleven years ago is considered the most-watched broadcast event in the history of television.

Yet as is always the case with strong leaders, he was also sometimes polarizing inside the institution he led.In particular, more liberal Catholics often charged that too much power accumulated in the Vatican on John Paul’s watch, and that the Church had become too rigid and dogmatic. Yet because it’s buried deep in Catholic DNA to hesitate to criticize a pope outright, a sort of lexicon developed to allow people to make these points in oblique fashion.

If you heard a given theologian or bishop talk about the importance of “collegiality,” for instance – referring to the idea that all the bishops should govern the Church together as a college, rather than an absolute monarch in Rome – it often meant they were on the liberal side of arguments about John Paul II. The same went for calls for the Church to be more “pastoral,” usually meaning not quite so stringent about doctrine and discipline.

Today, we have a similar dynamic with Pope Francis: He’s massively popular around the world, but somewhat divisive inside the Church itself. In his case, it’s often more conservative Catholics who find themselves ambivalent.Here, then, a quick guide to decoding four keywords or phrases in Catholic conversation that can betoken such reactions.

■“Clarity”: When somebody talks about the importance of being clear about Church teaching, it often means they find some of Francis’ verbal formula to be sloppy, misleading, or open to misinterpretation – his famous soundbite “Who am I to judge?” being the most commonly cited example.

■“Enemies of the Church”: When you hear a Catholic insisting that the Church does indeed have enemies, it can suggest discomfort with all the applause Francis draws from the secular world. It’s a way of saying that his perceived “can’t we all just get along?” ethos risks being a bit naïve, because not everyone who postures as a friend of the faith really is.

As it happens, I went to Holy Thursday Mass this week in Rome at a parish church about ten minutes away from the Vatican. The pastor made this very point in his homily, insisting that “some people don’t like to say it, but the Church has enemies.”Top of Form

Among other things, it was a good reminder that even in the pope’s own backyard, you can find people who aren’t necessarily in a full, upright and locked position in support of everything he says and does.

■“Primacy of the spiritual”: When a Catholic insists that the fundamental thing about the Church is not the works of charity it performs, such as feeding the hungry or taking care of the poor, but rather its spiritual teachings and practices – especially its worship, above all the Mass – it can sometimes signal concern that Francis puts too much emphasis on good works and not enough on the supernatural side, including the Church’s liturgical life. (For the record, the pastor at the Roman parish made that point Thursday night too.)

■“Sin”: There’s concern in some quarters that Francis’ keen emphasis on mercy can be misunderstood as an “I’m Okay, You’re Okay” sort of lassitude that glosses over the reality of sin in the world. When someone insists that mercy enters the picture only after someone has fallen, therefore, it can sometimes hint at a desire for the pope to be a little sharper in calling sin by its real name.

Of course, there are both/and solutions to all these contrasts. One can embrace both clarity and pastoral flexibility, for instance, and one can also be equally committed to charity and the spiritual life.

Yet it’s often a question of emphasis, and absolutely no one should be surprised that in a Church with 1.2 billion members, more than 400,000 priests and over 5,000 bishops worldwide, not every one of those folks puts the accent precisely where the current pope might place it.

All of which, I suppose, adds up to a simple point: It’s just not easy being pope.