Truth is Mighty and will prevail, some times after a long time! 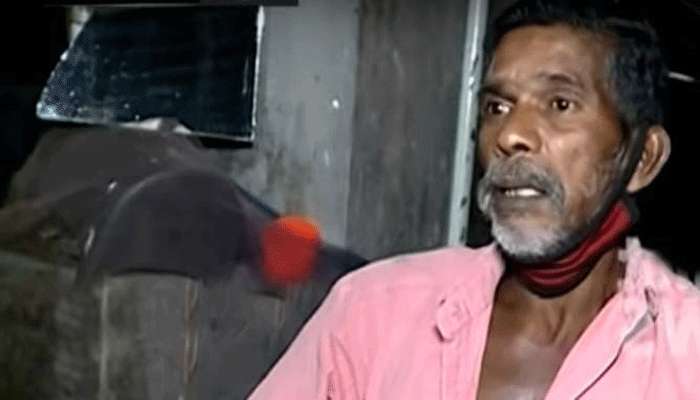 The Good Thief stole heaven is the Biblical story and that Jesus boke up his sealed tomb three days after his buial. That took place reportedly two thousand years ago.

In the present case the thief called Burgler, is Adakka (arecanut) Raju seen above. He was braded as a thief 28 years ago and is glorified now as the  honest man yesterday at the end of Abhaya case trial. The lesson seems to be Truth is mighty and can’t be buried alive for ever.

The accused and condemned here are the priestly religious class, more focussedly the Syromalabr Church in Kerala, the entire Catholic Church in India and the whole world.

The Iceburg called Clergy Sex hit the Titanic called the Church long long ago in the in the 1970es and reached its apex two years ago when Pope Francis did a temple cleasing of Chile and whole episcopate of around 30 accepted to be complicit and resigned en-mass, although Francis accepted resignations of only a few, possibily because he could ot find honest ones to replace others.

In its wake also bishops in US did an offer at lest, the same after the Chile incident. Already two years ago we, CCV wrote many times that the Catholic Church in India with  over 150 bishops Is worse off than Chile and entreated the Pope to do a Temple cleansing of Indian Church corrupt to core in sexual and financial matters.

We (CCV) have been exposing ugly instances of Kadappa, Mulakal of Jelander, bishop of Mysore and ever so many, all falling on deaf ears. This Is not to say that there no good bishops in India but few and in between.

Yes with the latest report on Abhaya case and the Syro Church spending over 50 crores reportedly, to save the three culprits,  yesterday curt verdict has torn  to shreds, the Syro Church in Kerala, India and in all rich countries of the world! They don’t migrate to poor coutrie in Africa.

The report below reproduced from Matters India needs a little correction. My name james kottoor is metioned instead of Thmas Kottoor. I belong to Palai diocese while Thomas Kottoor to Kottayam diocese(Kananya), nearby. It was pointed out long ago when question arose,  if I were the same person. No, it is a printers’ devil that creep in often, I guess.

The main accused in Abhaya case were two priests, Thomas Kottoor, Jose Poothrikkayil and Sr. Stephy. The second, Poothrikkayil is left out of the list but the shadow on him still persists, as later investigations may reveal.

What are the lessons for us? They are many. First is: judge not and you sall not be judged, even in the case of heaven, hell and purgatory. All are going to be saved even according to Francis. Change, change, change for the better.

We all are defective creatures in need of constant change and improvwmenr, especially ‘know-nothiga’ like myself. “Trifles make perfection, but perfection is no trifle.”(Michel Angelo) So let us support and correct each other to create a ‘world family 2001”. Happy Christnms and a Bright New Year! james kottoor, editor ccv

PS: We have listened to the verdict today, Dec.23, about it later. Jk)

Thiruvananthapuram: God came in the form of a burglar and became a key witness in the Sister Abhaya case, says the convener of the action council that waged a three-decade long battle to get justice for the nun who was murdered in a Kerala convent 28 years ago.

A Central Bureau of Investigation court in Thiruvananthapuram, Kerala state capital, on December 22 convicted a Catholic priest and a nun for murdering the 19-year-old Abhaya, a college student.

“The verdict proves that the court cannot be influenced with money and power,” Jomon Puthenpurackal, the action council leader, told reporters after the court found Father Thomas Kottoor of the Kottayam archdiocese and Sister Sephy guilty of murdering Sister Abhaya.
Both Sephy and Abhaya belong to the St. Joseph’s Congregation under the Kottayam Archdiocese. Abhaya’s body was found on March 27, 1992, in the well of St Pius X Convent in Kottayam, some 145 km northwest of Thiruvananthapuram.

The local police initially dismissed the death as a case of suicide, but persistent protests by Puthenpurackal and team forced the authorities to hand over the case to the CBI, a federal agency.

“The people’s trust in the judiciary has increased after this verdict,” Puthenpurackal claims. According to him, God intervened in the case in the form of a burglar.“It was God, who came in the form of key witness Adakka (arecanut) Raju and helped prove the case,” he explained.

Raju, who used to steal agriculture produces and other things from neighborhood, had gone to Pius X Convent early on March 27 when he saw two men in cassocks entering the convent flashing torches. He went back frustrated.

He rushed to the convent in the morning after hearing that a nun’s body was found in the well. Raju saw Fathers Kottoor and Jose Poothrikkayil, he had seen at night, there. Poothrikkayil, the second accused in the case, was let off in 2019 for want of sufficient evidence.

Raju said he was frightened and kept mum, but was arrested after a police’s sniffer dog came to his house. Under intense interrogation Raju narrated to the CBI team what he had seen at the convent that night.The defense team contested relying on a thief’s version but the court took Raju’s statement a crucial evidence.

Raju said he had to undergo torture for months as the investigator’s wanted to make him the murderer. After he was exonerated, he was offered huge money to turn hostile, as done by seven other prosecution witnesses in the case.

“My biggest desire was to get justice for that child. She got it now. That is all I wanted,” Raju told reporters. He says he and his neighbors have and nothing should happen to them. “It is unthinkable that they disappear one day,” added the man, who continues to live on a 3-cent plot in poor locality in Kottayam.

Puthenpurackal too says the verdict has brought immense joy to him. “I was only a means in the case. I have no regrets if I were to die now,” he said. He too had to face threats and pressure in his struggle for justice.

“Many people tried even to kill me for standing up for the truth. I studied only upto Class 6 and never thought I would be able to fight for a case. Though a huge amount of money was spent to save the accused, the CBI court stood for the truth,” Puthenpurackal added.

The activist says people who were never part of the campaign now appear on television channels to explain their role in the case. “Now some people have appeared claiming to be relatives of Abhaya. When I brought her parents to conduct a dharna (sit-in) in front of the secretariat, her brother had said that the case will never be proved. Those who never attended the protests are now appearing before channels and I’m happy to see it,” he added.

Abhaya’s parents – Thomas and Leelamma – died four years ago.Puthenpurackal said he survived tortures and threats to fight for the truth. “I have been waiting for this day for a long time. The accused should be awarded at least life sentence,” he added.

As the local police tried to depict Abhaya’s death as suicide, the action was council was formed on March 31, 1992, with Kottayam municipal chairman P C Cheriyan as president and Puthenpurackal as convener.

After the verdict, the first accused Father Kottoor, a 71-year-old moral theologian, said he was innocent and God is with him. Sephy, 57, the third accused, reportedly broke down hearing the verdict, sat down and asked for water.

Both were taken for medical checkup before transferring them to a jail.