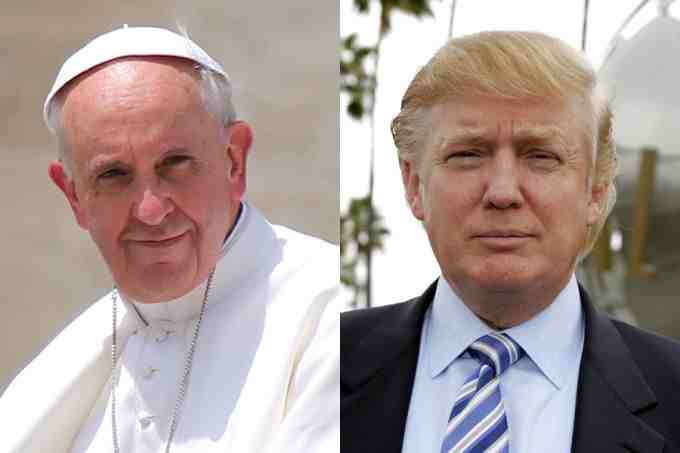 By Elise Harris and Alan Holdren. Aboard the papal plane, Feb 18, 2016 / 10:00 am (CNA/EWTN News).- During his inflight news conference en route from Juarez to Rome, Pope Francis responded to recent criticism from Republican U.S. presidential candidate Donald Trump, who called the Pope “political” and has threatened to build a wall along the U.S.-Mexican border.

“A person who thinks only about building walls, wherever they may be, and not building bridges, is not Christian. This is not in the Gospel,” the Pope said Feb. 18.

Pope Francis was asked to respond to comments from Donald Trump, who had referred to the Pope as a “pawn” for the Mexican government. Trump says that he will build a wall along the border of the United States and Mexico to prevent undocumented immigrants from entering the U.S.

The Pope spoke to journalists on his return flight from Mexico's Ciudad Juarez to Rome. He paid an official Feb. 12-17 visit to the country, which climaxed with the celebration of Mass at the U.S.-Mexico border Mass in Juarez City.

Immigration is a theme close to Francis' heart. A son of Italian immigrants, the Argentine pontiff frequently speaks out asking world leaders to overcome an attitude of indifference and to welcome incoming migrants with dignity and respect.

The Pope also touched on the issue in his speech to U.S. Congress last September, telling lawmakers not to be “fearful of foreigners,” and reminding them of the many positive contributions immigrants make to the life of society. He also pointed out that many of them are descendants of immigrants themselves.

However, in a Feb. 11 interview with Fox Business Network, Donald Trump criticized the Pope’s sympathy toward immigrants, as well as his decision to celebrate a Mass at the U.S.-Mexico border.

“I think the Pope is a very political person, I think he doesn't understand the problems our country has,” he said.

Trump said the Pope doesn’t understand the “danger” of having an open border with Mexico, and suggested that Mexico’s leaders seduced the Pope into the Mass in order to keep the border the way it is, “because they're making a fortune and we're losing.”

In addition to his comments about Pope Francis, Trump has repeatedly made offensive remarks toward immigrants, and has threatened not only to build a wall along the border, but to make Mexico pay for it when he does.

In a June 28 interview with CNN, Trump suggested that should he be elected, he would build a 2,500km (1,553 ft.) wall along the U.S.-Mexican border because, in his opinion, “a wall is needed in certain areas.”

He said that Mexico “makes a fortune” off the U.S., and that a wall “is a tiny little peanut compared to that. I would do something very severe unless they contributed or gave us the money to build the wall.”In his comments to journalists onboard the papal plane, Pope Francis jested, saying he is grateful to have been called a politician, since Aristotle defined the human person as “animal politicus,” meaning, “a political animal.”

“At least I am a human person,” he said, adding that as for being a pawn of the Mexican government, he’ll leave that “up to your judgment and that of the people.”

While he can’t tell anyone who vote for, Francis said that what he can say is that “this man is not Christian if he has said things like that.” The Pope said that we have to see if Trump really said things the way he did, but that in the meantime he’s willing to give him “the benefit of the doubt.”

On Wednesday Vatican spokesman Fr. Federico Lombardi responded to Trump’s criticism of the Pope’s sympathy toward immigrants, calling the presidential candidate’s remarks “very strange” and suggesting that he get more perspective.

“The pope always talks about migration problems all around the world, of the duties we have to solve these problems in a humane manner, of hosting those who come from other countries in search of a life of dignity and peace,” Lombardi said.

He noted that Pope Francis frequently makes similar remarks to leaders across Europe, which is something Trump would know “if he came to Europe.”