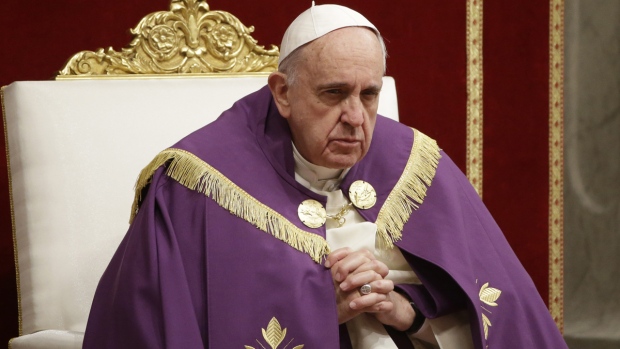 Two deadly daemons pestering the Catholic church, now under the scorching heat of the desert called LENT, it seems to us, are: ‘Sex-craze and Money-craze’.

Francis was daring enough to confront them head on from the very outset. To cleanse the Vatican finances he appointed the Australian cardinal Pell and ended up sending him back to his country to get his alleged sex scandal cleared, leaving vacant that post till today. A comparable event in India is Cardinal Alanchery caught in alleged corrupt land sale in Syromalabar Church with no clear solution in sight so far.

(This is a CCV comment on “Pope…in troubled waters” of UK, Guardian’s, in-depth analysis of his captaincy, published separately in today’s ccv.)

In dealing with second daemon, which actually is the FIRST for a church run by a reluctant celibate clergy  perpetually caught in womanizing and sex scandals, Francis is now deadlocked in the sex-scandal cover ups of Bishop Barros in Chile. Both global secular and religious Media, including CCV, were questioning his labeling the allegations in Chile,  as clear ‘calumny’ devoid of any convincing evidence.

The end result is Francis has finally reacted  very positively, to do a re-examination, now going on. A parallel in the Syromalabar Church is, its endless list of sex scandals from Abaya case 25 years ago to a week-old Palai diocese Kaduthuruthy priest caught and allegedly in the process of punishment.

So, is our present South American Pope, recently rated  also as the top world leader according to recent global poll, becoming unpopular and a sign of contradiction, after five years of his reign —  on March  13 he will complete 5 years as pope – due to the fury of winds and weaves dashing against his boat, called the Bark of Peter?

Nay he is also accused of being a  ‘a communist, a friend of atheists, a populist, not  even a proper Catholic’. Does it mean that the prophesies about the end of papacy and Catholic church, the biggest of organized religions, by the Irish prophet Malachy and the French Nostradamus are going to come true? ‘God forbid’, we are prompted to say!

We had also argued that organized religions, just because they are all working for the organizers like all political parties, must be buried. The only alternative we could envision was the emergence of the CATTLE CLASS, company of Jesus alone, born in the Cattle shed and cared and served the poor and needy in all domains of human life?

When it comes to uplifting the last, least, lost, exploited and suffering lot, there is none like a crazy Christ, homeless and trudging  all the dusty way to Calvary’s top. One cannot be equally a follower of that Jesus and at the same time a card carrying member any organized religions who, like the Pharisee in the temple pray and preach one thing and do just the opposite! If we did that, we would be counter-witnessing that simple, humble, rustic, ‘country’ carpenter of Nazareth. Didn’t his contemporaries belittle his words of wisdom asking: ‘Is he not, only the son of a carpenter without any known schooling?’

In any case the Catholic church and all organized religions competing for prominence, are facing their worst crisis in history. We have to wait and see how the comfortable class in the Catholic church tides over the present Himalayan hurdles. None can hunt with the haunts and run with the rabbits! If He is really the Haunt of heaven we are all quite safe in the firm grip of his canine jaws. Therefore fear not to follow Him as the shining leader of the Cattle class.

Since Francis is living a frugal,  Spartan life, no one can accuse him of as one  belong to the comfortable class. The life of the Carpenter of Nazareth was and is his compelling message. If He is the sure WAY why not decide to run in that beaten track, while all the rest (organized religions) including thousands of churches (Bene currit sed extra viam) run very well to beat their competitors but outside the track. This is precisely the reason why the Syromalabar church is called and caricatured as the “Zerochurch”.

Zeros, or ‘know-nothings’ that we all are, can assume value only when they come after the One (1) who shows and leads in the track. “Follow Him alone and not any of the divided, competing churches or organized religions” is our humble,

simple alternative suggestion! Take it only if it is convincing to your God-given light called ‘Reason’.