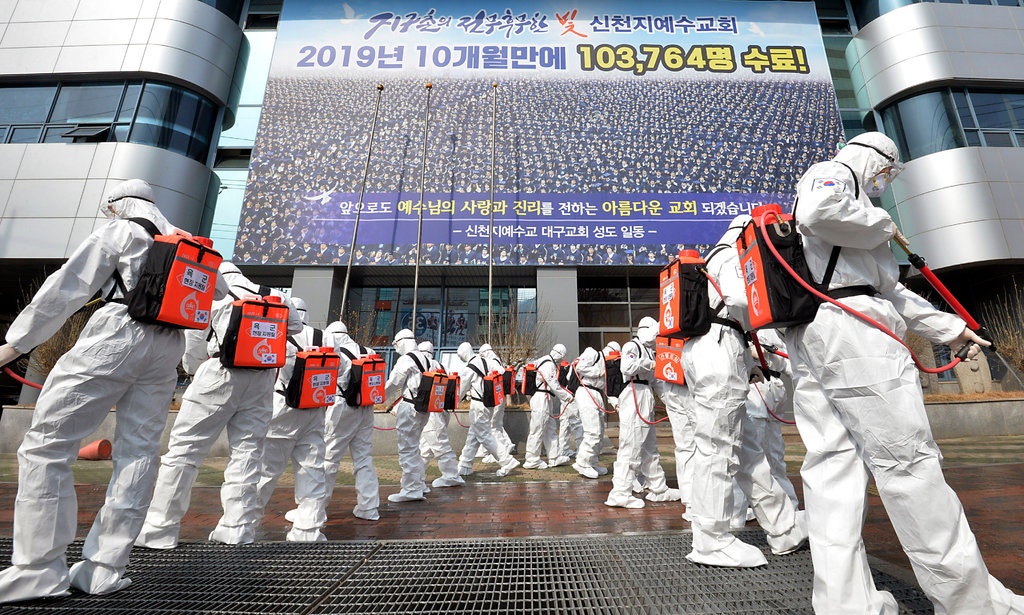 Cover photo:  South Korean soldiers spraying disinfectant in front of a branch of the Shincheonji Church of Jesus in Daegu last week. Some people are calling for the sect to be dissolved and its founder to be charged with “murder through willful negligence.” Credit…Lee Moo-Ryul/Newsis, via Associated Press 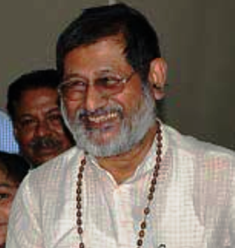 There are certain flowers and shrubs that immediately clam up when touched, which is why they are called “Touch Me Nots”. It is a natural self-defence mechanism that is also seen in tortoises. They withdraw into their shells.

Post the Corona Virus (CV) pandemic a lot of people have stopped touching, or don’t allow others to touch them. The Government is also pushing for the untouchability of unnecessary things as a precautionary measure. Perfectly legitimate.

So what do we make of a pastoral letter issued by Cardinal Oswald Gracias on 5th March that advocates the same vis-à-vis the sacred liturgy? The letter inter alia states that:

1. The faithful should not shake hands while offering the sign of peace, and should join their hands in a namaste instead.

2. Communion should be administered only in the hand.

3. This coming Good Friday the faithful should not kiss the cross, but just bow before it in veneration.

4. The priests should wash/sanitize their hands before distributing Communion.

5. Holy water receptacles should be drained off.

Would this actually be a denial of the efficacy of the sacraments, by which the Catholic Church in particular, lays much stress? Canon Law states that “The Church carries out its office of sanctifying in a special way in the sacred liturgy, which is an exercise of the priestly office of Jesus Christ” (Can 834:1). We could also question why holy water should be sprinkled on the faithful during the penitential rite if it cannot even counter the CV? Devotees take home holy water in bottles to be used in times of sickness. Such water is also collected from pilgrimage centres like the Jordan River, Lourdes or Velankanni. Muslims bring sacred Zamzam water from Mecca that they believe sprang from the rock struck by Ishmael, the son of Abraham. Hindus believe that the waters of the Ganga and other rivers are sacred and purifying, no matter how polluted. The Sikhs also believe that when Guru Nanak struck the ground at Panja Sahib, now in Hasan Abdal district of Pakistan, water emerged and still flows.

Before his Ascension Jesus assured his disciples that “These are the signs that will be associated with believers … they will pick up snakes in their hands and be unharmed should they drink deadly poison” (Mk 16:17-18).

Is the cardinal’s exhortation then contrary to church teachings and practice, or what we are told in sacred scripture? Is this indicative of weak faith? When Pope Francis recently contracted a sniffle and avoided public engagements, some comments on a renowned TV website asked, “Now where are all those evangelists that claim to perform miracles in the name of Jesus”? Similar sarcastic sniggers were made when the diocese of Rome suspended public Masses for a month.

At the other end of the spectrum we have cases of fundamentalist preachers in Africa. Scores of people died in a stampede to collect blessed oil. In another recent case a pastor told his followers to consume rat poison and nothing would happen to them because of their faith. They died.

Whom should we believe, the Catholic Church with its overemphasis on the sacraments and sacramentals, the fundamentalist evangelicals, or the voices of reason, as expressed by the cardinal?

Before rushing to conclusions, let us examine some more historical facts. Two sisters of the SCJM congregation were distributing communion on 26th December 2004 in Sri Lanka, when they were swept away by the tsunami. Ironically, the elephants in Sri Lanka sensed something wrong and rushed to the safety of higher ground. Tilly Smith, a ten year old school girl from Surrey, England, was holidaying with her family at Maikho Beach at Phuket Island Thailand when she saw the sea water withdraw. She recognized it as a prelude to the tsunami and saved her family and many others. She was renamed “Angel of the Beach”. Similarly Morgin gypsies on Surin Island recognized the signs and escaped in time. These incidences teach us that we must also add reason and a scientific temper to our possibly blind faith.

I shall now quote another popular text used every Advent season to herald the coming of the Messiah. “The wolf will lie with the lamb; the panther lie down with the kid, calf, lion and fat-stock beast together, with a little boy to lead them. The cow and the bear will graze; their young will lie down together. The lion will eat hay like the ox. The infant will play over the den of the adder; the baby will put his hand into the viper’s lair. No hurt, no harm will be done on all my holy mountain for the country will be full of knowledge of Yahweh as the waters cover the sea” (Is 11:6-9).

We devoutly read this passage every year. Has it actually happened? Have swords been turned into ploughshares and spears into pruning hooks, as another popular text from Isaiah claims? Should we then conclude that biblical prophesies have remained unfulfilled, or scriptural assurances ineffective? The danger lies in reading scripture in isolation, or out of context. Even in the above there is a qualifying punch line – “No hurt, no harm will be done on all my holy mountain for the country will be full of knowledge of Yahweh as the waters cover the sea”! The message is clear. Transformation is dependent on the fullness of knowledge of God. It is not something that automatically occurs. It has to be strived for.

The most telling example is of Jesus himself. We have just entered into Lent and would have surely heard the gospel reading of the temptation in the desert (cf Lk 4:1-13). There is an interesting battle of wits between Jesus and the devil. The first temptation is elementary – to change the stones into bread. Jesus counters this by quoting scripture, that man does not live by bread alone, but from every word that comes from the mouth of God (cf Deut 8:3).

Jesus faces the next temptation of power by again quoting scripture, that homage may be made to God alone (cf Deut 6:13). The devil now turns Jesus’ defence on its head. He too quotes scripture to his own advantage saying “He has given his angels powers about you, to guard you … They will carry you in their arms in case you trip over a stone” (cf Ps 91:11-12). Jesus fights back again with scripture “Do not put the Lord your God to the test” (cf Deut 6:16). Notice that Jesus’ counters were all from the chapter in the Book of Deuteronomy when the Israelites were struggling in the desert. So Jesus himself had contextualised scripture. How much more should we!

Remember that it was the devil that knew Jesus’ true identity and mission. That is why it wanted to scuttle the game plan by getting Jesus to make a false or premature move. What would have happened had Jesus accepted the devil’s dare to jump from the pinnacle of the Temple? He would probably have died. Even if he had risen again then, it would have passed off as an eerie miracle and would have defeated his salvific mission. After most of his miracles Jesus would warn people not to speak of them. But the devil was constantly cajoling Jesus by calling him the Son of God. It was a cat and mouse game all the way to Calvary. There too the temptation was “If you are the Son of God come down from the cross”. It was the devil’s last desperate gamble to stop Jesus from dying. Here too Jesus resorted to scripture crying aloud “Eli, Eli, lama sabachthani”, a quote from psalm 22.

In the light of the above I would rather learn from the example of Jesus himself. That is why I would wholly endorse Cardinal Gracias’ exhortation. It is better to be safe than sorry. As the adage goes – God helps those who help themselves.

We would also do well to recall that the official Catechism of the Catholic Church says that the sin of Presumption is when one “presumes upon God’s almighty power or mercy … and glory without merit” (CCC 2092). So let us not presume anything or take God’s mercy for granted. In the onslaught of the Corona Virus I choose to be a Touch Me Not. I’d rather be like Tilly, not silly.

* The writer has written several books and articles on the Christian faith.