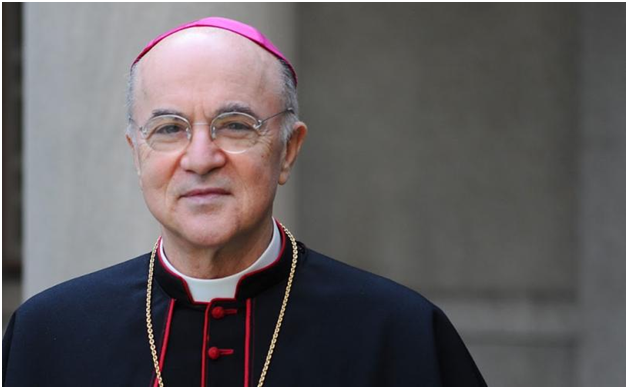 This is a continuation of the story on Divinity of Jesus, posted yesterday in CCV Oct.9th . Archbishop  Maria Vigano is already famous or notorious, because of his questioning Pope Francis in connection with Cardinal Macarick of Washing, whom Francis, finally had to laicize.

Pope Francis also had hit the lime-light for his repeated call to youngsters  to go round and “make a mess” where priests are living the life of the sacristy, without venturing out into the peripheries to evangelize through action programme for the poor. Francis was doing it even as Cardinal in Buonos Aires walking with break fast for the starving in the city.

Questions raised by Vigano and others are very relevant. Francis’ prolonged silence or refusal  to answer many questions, may be his way of action, to provoke questioners and the ordinary faithful in many cases in life, because they themselves have to reflect and act on their own, if the Church is to become the “People of God” and not brainless sheep to be led by the nose by the hierarchy.

This may be Franci’s way of Catechising to jerk the “theologically illiterate laity” out of their passive rut, to make them Adult Christians acting on their own inspired by Jesus their Supreme Pastor. james kottoor, editor CCV.

Please  read below the story in Lifesite.

ROME, October 10, 2019 (LifeSiteNews) — Following the Vatican’s second attempt to deny claims by atheist Italian journalist, Eugenio Scalfari, that Pope Francis told him he doesn’t believe in Christ’s divinity, Archbishop Carlo Maria Viganò is urging the Pope himself to give a “clear answer.”

In comments to LifeSiteNews after Thursday’s synod press briefing and denial of Scalfari’s claim, Archbishop Carlo Maria Viganò said: “Let your ‘yes’ be ‘yes,’ and your ‘no’ be ‘no.’  Why doesn’t the Pope use the language of simple people, while he invites people ‘Cher jaleo,’ to create chaos, confusion and division. Is this the mission of the Pope? Hacer jaleo.”

At the end of Thursday’s synod briefing, the Prefect of the Vatican’s Dicastery for Communications, Paolo Ruffini, insisted that the Pope “never said what Scalfari wrote.”

“Both what was reported in quotation marks as well as the free reconstruction and interpretation by Mr. Scalfari — the conversation dates back more than two years — cannot be considered a faithful account of what the Pope said and [what he said] can instead be found in all of his magisterium and that of the Church about Jesus, true God and true Man,” said Ruffini.

LifeSite asked Archbishop Viganò: “In what sense was Ruffini’s further clarification insufficient, given that he explicitly referred to Jesus as “true God and true Man?”

“In the sense that Christians expect a clear answer from the Pope himself. The thing is too important; it is essential: Yes, I believe that Christ is the Son of God made Man, the only Savior and Lord,” Archbishop Viganò replied. “All Christians await this clarification from him, not from others, and by virtue of their baptism have the right to have this response.”

While the further clarification from Ruffini is widely seen as a step in the right direction, both high-ranking clergy and ordinary Catholics are asking the same question: why does it take over two tries and over twenty four hours to clarify a matter regarding a truth as central to the Christian faith as the divinity of Jesus Christ? And why does Pope Francis, who has granted Scalfari several interviews over the years, not himself confirm the brethren in the faith and distance himself from a man who is sowing confusion?

A priest in Rome pointed out that the confusion generated by Scalfari, who is numbered among the Pope’s favored interviewers, is compounded given the “Document on Human Fraternity”, color, sex, race and language are willed by God in His wisdomthat Pope Francis signed with a Grand Imam Ahmad el-Tayebin February, and which states: “The pluralism and the diversity of religions.”

He argued that if the Pope states that all religions are willed by God in the same manner as sex, race or color, Catholics begin to question the truth of the divinely revealed truth that Jesus Christ is the Second Person of the Most Holy Trinity, the Incarnate Word and only Savior of the world.

American Capuchin priest and scholar Father Thomas Weinandy echoed this view in a recent article for The Catholic Thing titled, “Pope Francis and Schism.” The Abu Dhabi statement, he said, “directly contradicts the will of the Father and so undermines the primacy of Jesus Christ his Son as the definitive Lord and universal Savior.”

Pope Francis has granted the 95-year-old Scalfari (who doesn't use a tape recorder) several interviews since the beginning of his pontificate, with similar and predictable effect. In March 2018, Scalfari claimed the Pope told him that hell does not exist. La Repubblica, an Italian daily which Scalfari founded, claimed that Francis has told him the souls of those who do not go to heaven are annihiliated. Annihilationism is a heresy according to the Catholic Church.

At the time, the Vatican disputed the claim, insisting the Pope does believe that hell exists and that “no quotation of the article should be considered a faithful transcription of the words of the Holy Father.”