Who is top world leader today? It is Pope Francis! 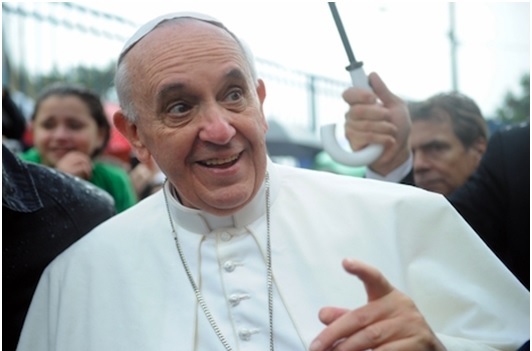 In the latest survey of world leaders done by Gallop international, which is usually about politicians in the secular world, the wonder of wonder is this:

The highest placed person on the list isn't a political leader, but a religious person: Pope Francis who has a 58% rating.

Then comes German Chancellor Angela Merkel with 49%, as the top politician in the secular domain,  followed by French president Emmanuel Macron with 45% approval. The US President Trump with 31% support could get only the third place in the secular domain. What is significant is, India's PM Modi  comes immediately after Trump as the fourth secular leader with  30% support. Only then comes Chinese and Russian presidents and British PM followed by many others.

What is significant to note are two things: 1. Even in a secularized world people at large give top priority to religion and moral values. 2. Both among  religious and secular leaders of the world Pope Francis, as the head of the Catholic church, though he is the head also of Vatican, the smallest State in the world, is looked up to as the towering, shining personality, both among religious and political leaders.

Who is top religious leader in India?

Theocratic states  are fast disappearing except in the Muslim world. That doesn’t mean that religious and moral values are disappearing or losing hold on human minds. People at large want  even politics to be guided moral values  and principles contained in all religions. Gandhiji, the Father of the nation wanted it that way.

India has been the cradle of many world religions. In this context CCV would like to raise a few pertinent questions. Who is the one religious leader in India who holds a commanding position over the whole nation? Over the whole world? Which of the religions in India has leaders who are looked up to by the whole country?

Among Christians and multiplicity of Churches in India is there any one spiritual person looked up to by the entire country? Since Pope Francis happens to be the head of the Catholic world, acceptable to all irrespective of differing religions persuations, what about the Catholic churches in India made up of Latin, Syromalabar and Syromalankara Rites?

Who are such Christian & Catholic leaders?

Who is the one towering Catholic personality in India? Is there any Bishop in any of the three Rites comparable to Francis? Who speaks up daily on world’s hot/sore spots, most suffering people, whose voice is heard, listened to and appreciated  by people in India or globally? Is there any such Catholic leader, among the   clergy or laity, comparable even distantly at least to Pope Francis?

Comparisons are odious but useful and even necessary to find out where  we stand and how the Churches in India who are proud of their many achievements/services,  boast of them in public or are criticized, humiliated, laughed at or ridiculed in public? Don’t they all preach about the necessity of making daily examination of conscience to make real progress morally and spiritually?

Such examinations are like taking the balance sheet of our daily doings, daily life. Is it not the mark of a duty conscious person? There could be at least a handful of exemplary individuals among us. So please speak up! We are listening to be edified!