It is time Rahul Gandhi must make his charge or apologise 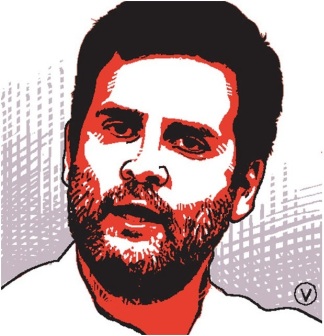 (Note: This piece appeared as an editorial opinion in the print edition of The Economic Times.  It looks Rahul is making a fool of himself by stating things he cannot prove!  If he has clinching proof against Modi he should produce in parliament or outside.  If he dares not to speak it outside parliament, it is because he has no solid proof and can be prosecuted for defamation. In the parliament he can get away with any nonsense because of the parliamentary privilege  he enjoys.

Allegations of personal corruption against the PM is a serious issue and therefore he should be forced to speak it out or action should be taken against him for not doing his duty as an honest citizen concerned about the good of the country. james kottoor, editor)

Have premia on earthquake insurance gone up in Delhi since Rahul Gandhi promised to make the earth tremble with the revelations he has up his sleeve against Prime Minister Narendra Modi? Not quite. Why does the Congress vice-president persist in this game of allegation and innuendo? After all, it is not doing anything great to boost his rating as a serious leader who could lead the Opposition to Modi in 2019. Opposition leaders have not waited for the forum of Parliament to open up for them to make serious charges against the ruling party and its leaders. VP Singh launched his Bofors missile against Rajiv Gandhi outside Parliament, after all.

Perhaps Rahul Gandhi wants to make it clear that the politics of allegation and innuendo, which the BJP and its leaders have been practising against the Gandhis in relation to the Agusta Westland helicopter deal, is something that can be used against the BJP, too. Perhaps, Gandhi wants to rupture the aura of moral superiority that the prime minister has managed to wrap around himself. Perhaps, he wants to build up some momentum and suspense before announcing whatever he has to announce.

Whatever his motive, this cannot continue forever. Gandhi must come out with whatever charge he has, regardless of whether he speaks in Parliament or outside. And Prime Minister Narendra Modi should call Gandhi’s bluff. He should attend Parliament Friday and dare the Congress vice-president to go ahead and rock the Richter scale.

That would totally remove any wiggle room for Gandhi, who would either have to make good on his threat or eat humble pie. That is what the people want: their leaders must walk the talk, whether on the ruling side or in the Opposition. Politicians’ words must not follow cash and lose all value.

When stories of corruption appear in the media every now and then, why is Rahul Gandhi insisting that he will reveal the Prime Minister’s “personal corruption” only in Parliament and not outside of it? (“Rahul accuses Modi of ‘corruption’”, Dec.15). The public has a right to know what is going on behind the scenes. Mr. Gandhi’s hesitancy to reveal details only raises doubts. One has no other choice but to believe that his accusations against the Prime Minister are wild and baseless.

Rahul Gandhi first said there would be an earthquake if he spoke in Parliament. Now he says he will “expose” the Prime Minister on personal corruption charges if allowed to speak. Hardly any time is left for the winter session of Parliament to end. The Opposition has stalled all business this winter session. If Mr. Gandhi is not allowed to speak soon in Parliament, where will his charges against the Prime Minister land? What prevents the astute vice president of the Congress from placing the explosive charges before the media and the people? I suppose we would be spared a massive earthquake. This seems to me like a gimmick and nothing more.

Both Mr K.R. Srinivasan and Mr C.K. Subramaniam are absolutely on the dot.  The reason why Rahul Gandhi insisted on speaking only in the Parliament is because of the immunity he would get.  In the parliament one can get away unpunished with any rubbish.  This is the lowest form of accountability of which our MPs take the fullest advantage.  If at all very offensive, specially personal (which Rahul has claimed on the electronic media as Modi being personally guilty of financial corruption, then there is an easy way out by deleting (expunging) the objectionable comment.  If Rahul was so sanguine why was he so desperate to meet the "Corrupt" Prime Minister, along with his party's leaders, thus causing fissure in the opposition?  To score brownie points that he is leading the Crusade against corruption, particularly in view of the UP elections? Or to seek immunity from prosecution for being libel? Remember the adage "An empty vessel sounds much?"  If he cannot prove his very serious allegations,  then as someone said, Congress will be reduced from 44 to 4 in the Lok Sabha and Rahul will lose all his perquisites including the tag of being the most eligible bachelor!