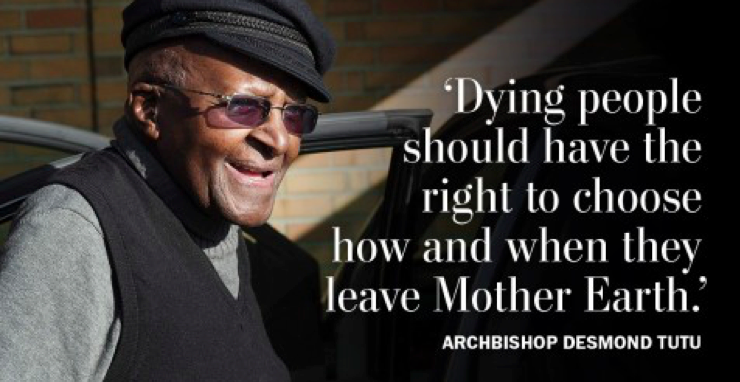 (Note: Desmond Tutu is archbishop emeritus of Cape Town and a Nobel Peace laureate. He argues for the right of terminally patients the right to die as they wish which he thinks is Christian and must be respected by all.  Some ten years ago this scribe wrote an article titled: “Duty to Serve

Gives Right to Die” http://sites.google.com/site/jameskottoorspeaking/ (You can read it in the website:) The heading is in the Alphabetical index. First I wrote it in my book: Womb to Tomb, published in 2008. In it I argue that if Jesus laid down his life for his friends, we also have the right and duty  to lay down our lives for the sake of love. Recall his words: “There is no greater love than to lay down our lives for our friends,” and “I lay down my life by myself” etc. In it I argue that a doctor assisted death is to be approved, especially for terminally ill patients. This is what I have advised my son who is a doctor, to do it to me and not to prolong my life indefinitely. This is my view, and also the view of many. I don’t  ask others to accept that view. May what is right and honourable prevail. james kottoor, editor)

Throughout my life, I have been fortunate to have spent my time working for dignity for the living. I have campaigned passionately for people in my country and the world over to have their God-given rights.

I have been fortunate to have long spent my time working for dignity for the living. I wish to help give people dignity in dying. (Dignity in Dying and Compassion & Choices)

Now, as I turn 85 Friday, with my life closer to its end than its beginning, I wish to help give people dignity in dying. Just as I have argued firmly for compassion and fairness in life, I believe that terminally ill people should be treated with the same compassion and fairness when it comes to their deaths. Dying people should have the right to choose how and when they leave Mother Earth. I believe that, alongside the wonderful palliative care that exists, their choices should include a dignified assisted death.

There have been promising developments as of late in California and Canada , where the law now allows assisted dying for terminally ill people, but there are still many thousands of dying people across the world who are denied their right to die with dignity. Two years ago, I announced the reversal of my lifelong opposition to assisted dying in an op-ed in the Guardian. But I was more ambiguous about whether I personally wanted the option, writing: “I would say I wouldn’t mind.” Today, I myself am even closer to the departures hall than arrivals, so to speak, and my thoughts turn to how I would like to be treated when the time comes. Now more than ever, I feel compelled to lend my voice to this cause.

I believe in the sanctity of life. I know that we will all die and that death is a part of life. Terminally ill people have control over their lives, so why should they be refused control over their deaths? Why are so many instead forced to endure terrible pain and suffering against their wishes?

I have prepared for my death and have made it clear that I do not wish to be kept alive at all costs. I hope I am treated with compassion and allowed to pass on to the next phase of life’s journey in the manner of my choice.

Regardless of what you might choose for yourself, why should you deny others the right to make this choice? For those suffering unbearably and coming to the end of their lives, merely knowing that an assisted death is open to them can provide immeasurable comfort.

I welcome anyone who has the courage to say, as a Christian, that we should give dying people the right to leave this world with dignity. My friend Lord Carey, the former archbishop of Canterbury, has passionately argued for an assisted-dying law in Britain. His initiative has my blessing and support — as do similar initiatives in my home country, South Africa, throughout the United States and across the globe.

In refusing dying people the right to die with dignity, we fail to demonstrate the compassion that lies at the heart of Christian values. I pray that politicians, lawmakers and religious leaders have the courage to support the choices terminally ill citizens make in departing Mother Earth. The time to act is now.