Three MUST READ Editorials in the Times of India dated Jan.15th 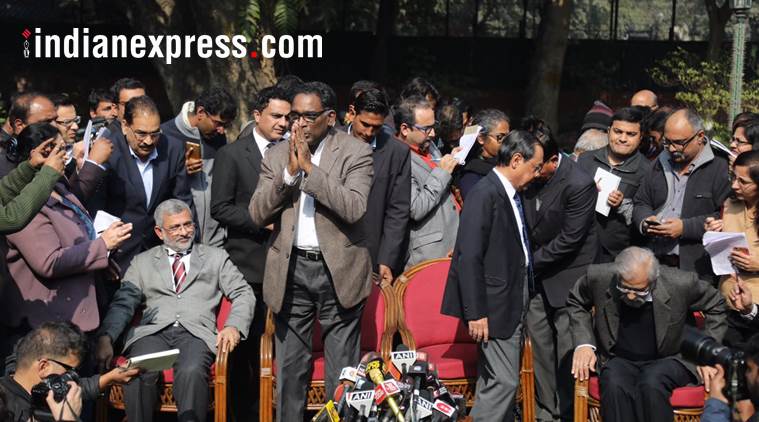 (Note: All three editorials in the Times of India of Jan.15th,  are on burning issues in India and therefore a Must-read for those who wish to be up to date with latest developments.

re four chief justices called for a public press report, unheard till now and warned that Democracy was stake and remedial measures should be taken immediately. TOI suggests it should be settled internally through discussion between the 4 judges and CJI, as they are all equal and ONE first among equals with no commanding authority.

The second editorial is about Aadhaar card equally drowning in controversy and fear among many including us,  that citizens’ privacy is bartered away. We got strengthened in our fear when the famous global whistleblower Edward Snowden himself was categorical in saying that India’s Aadhar was defective. Witty Sagarika Ghose likens it to making it compulsory even for the Swatchh Bharat toilets use as well.

The third one allays the fears of many about population explosion in India especially among certain sections of the community, especially Muslims, that they are multiplying too fast which is not true. With clear statistics in various communities it tries to prove, that birth rate is declining with all communities and parity in male and female children,  or steady decline in Total Fertility Rate (TFR) is going to be achieved very soon. So have a fruitful reading. james kottoor, ccv .editor)

must take the initiative to settle differences within

There is unanimity among the legal fraternity that differences between Chief Justice of India (CJI) Dipak Misra and four of his senior Supreme Court colleagues should be resolved internally. It is the best way forward as the essence of the dispute is about administrative procedures in the apex court. Given this context, the CJI should take the initiative to resolve the differences. This will also present him with an opportunity to establish unambiguous norms that will serve as a touchstone for his successors.

The CJI as master of the roster plays a vital role in the smooth functioning of the Supreme Court. His power to constitute benches for important judgments has a bearing on the larger welfare of society. For example, the apex court has to decide on the Aadhaar issue and the title dispute in Ayodhya, two judgments with significant implications for the country’s future. While Ayodhya pertains to religious passions which are routinely whipped up for partisan politics, the apex court recently decreed in a landmark judgment that Indian citizens have the right to privacy, of which Aadhaar is the biggest test case. Therefore, it is important that constitution of benches is seen as adhering to some set principles.

This was the backdrop to the apex court’s bar association suggesting that all PILs henceforth be heard by benches with collegium members. Set norms of this nature will allow the court to function smoothly and also enhance its credibility. The Supreme Court is the guardian of India’s Constitution. As an institution, it is as critical to Indian democracy as the Election Commission. However, the unprecedented press conference last week by senior judges should be seen as a clear symptom of a judicial crisis. This needs a solution as the credibility of the institution is at stake.

The guiding principle in the current situation has to be a judicious combination of transparency and a well-defined system. Once they are in place the court’s administration will function smoothly. The episode also has other lessons. For years some of the complaints about the apex court’s functioning, including the collegium system, has come from within the judiciary. It does suggest that there is a case for the apex court to take another look at its functioning. Transparency is an essential ingredient in a democracy and its institutions.

Don’t have an Aadhaar card?

You may not be able to use a Swachh Bharat toilet

Since the golden rule of Indian politics is where you stand depends on where you sit, it should come as no surprise that before 2014 general elections BJP members had trenchantly attacked the Aadhaar card as a waste of crores and as a white elephant. Today the Modi government is so committed to Aadhaar that the former white elephant is the elephant in every bedroom because the Modi government is saying this haathi is everyone’s saathi. The Unique Identification scheme is causing unique problems for many citizens, but there is no Aadhaar alternative now.

The government is thundering: are you a card carrying member of the Indian nation? If you don’t have the right card the government referees will show you the red card and pull you away from the field. Banks, hospitals, hotels, airlines, emergency services, ration shops: all are yelling Aadhaar laao, otherwise baahar jao. A hospital in Rajasthan put up a sign saying anti-rabies shots will not be given without an Aadhaar card, which is why so many citizens are being driven barking mad. Tragic deaths have occurred because many are dying to get this particular invitation card. Politicians normally play the Hindu card and the Muslim card, but this time it looks as if the whole Aadhaar enterprise is falling down like a house of cards.

With journalists revealing how Aadhaar data can be easily accessed, global whistleblower Edward Snowden has asserted that the privacy of a billion Indians has been destroyed. In the era of identity politics, Indians will have to fight even harder for their identities. Now the government says everyone will get a “virtual ID” to protect their details. That makes sense because for many Indians, government services like health and education are virtual reality anyway. Soon virtual citizens living in a virtual country will only be entitled to virtual benefits. Will that be Digital India or a digestive problem? In a digestive emergency if you rush to the nearest Swachh Bharat shauchalaya you may first be asked to show your Aadhaar card. This could prove problematic for Modi government’s other scheme against open defecation as citizens without Aadhaar run idhar and udhar.

Aadhaar was meant to be about everybody getting to eat anda but now it’s about the government danda. Given the climate of nationalism, if you don’t have Aadhaar, soon you’ll be called an anti-national or gaddaar.

(DISCLAIMER : This article is intended to bring a smile to your face. Any connection to events and characters in real life is coincidental.)

The steady decline in Total Fertility Rate (TFR) – the average number of children born to a woman – is a positive development for India. The National Family Health Survey 2015-16 shows fertility rate is nearing replacement levels – where children will take the place of their parents – heralding the possibility of population stabilisation in a few years. The past decade has seen India’s TFR fall from 2.7 to 2.2. Muslims have recorded the highest TFR decline from 3.4 to 2.6 while Hindus have fallen from 2.8 to 2.1. All other religious communities have gone below replacement levels. Bihar is the only big state with TFR above 3 while four other states which were in that club a decade ago – Uttar Pradesh, Madhya Pradesh, Rajasthan, Jharkhand – are below that mark today.

Big states with sizeable Muslim population, like Jammu & Kashmir and Bengal, have one of the lowest (1.6) TFR in the country. This explodes the myth of Muslims outnumbering Hindus over the years, as propagated by right-wing organisations. The issue of high TFR is more closely linked to culture than to religion. Overall figures suggest the bulk of youth population will come from the north of the country. The government must prepare a blueprint to convert this demographic dividend into opportunity.

Enhancing female literacy will go a long way in reducing TFR in states like Bihar. Limited supplies and reluctance among rural women to go to medical stores to collect contraceptives still remain problems. Only 54% of married women use some method of family planning, of which 37% have adopted permanent methods like sterilisation as per the survey. In stark contrast, male sterilisation constituted just 0.3%. Government must provide access to preferred methods of family planning, rather than leaving women with no choice but to resort to extreme measures like sterilisation.