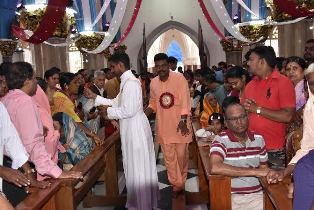 Bengaluru (Matters India): Thousands of saffron-robed devotees Saturday flocked to St. Mary’s Basilica in Bengaluru for the launch of a nine-day prayer in preparationfor the feast of the Blessed Virgin’s birthday.

Archbishop Bernard Moras of Bangalore led the morning Mass assisted by retired priests who served the archdiocese for decades in the 127-year-old basilica in Shivaji Nagar area of the capital city of Karnataka state.

The prelate urged the faithful to “pray not only for physical healing but also for mental and emotional healing and spiritual wholeness.” Quoting the gospel of the day he observed “St. John the Baptist stood for Truth even in the face of impending death. He was beheaded but we remember him for his courage as he stood for Truth without compromise.”

While thanking the retired priests for their decades of service to the archdiocese Archbishop Moras exhorted the faithful to seek the intercession of Mother Mary for peace in families and in the neighborhood. “As this year is dedicated to Families and Consecrated Life, let us pray for harmony in our homes and for peace and love between spouses and between parents and children. Pray also for Priests and religious as they carry out the mission entrusted to them”.

The 160-feet high Basilica draws millions of people from various religious backgrounds from India and abroad during the 9-day novena services that culminates with a grand car-procession on the feast day September 8.

Construction of St. Mary’s Church began June 1875 by the then Parish Priest Fr. E.L. Kleiner, who later became the bishop of Mysore. The church was consecrated on September 8, 1882, the feast of the Blessed Mother’s birthday. Pope Paul VI, elevated it as Annai Arockiamarie Basilica (Our Lady of Good Health) on September 26, 1973.

It is believed that a small statue of Our Lady was left untouched by miscreants who burnt the church in 1832. Some popular accounts indicate that the miscreants were struck blind. The statue now occupies a prominent place in the Basilica now.

The Italian Jesuits of the Malabar Mission were the founders of the Mysore Mission in the 17th century. They were succeeded by the French Jesuits from Madura and Carnatic Missions in the 18th Century. A great plague had spread throughout ‘Blackpalli’ (the old name of the region). People sought the intercession of Mother Mary to save them from death. The plague vanished from the vicinity.