This little girl only has half a heart, but she’s full of joy for Pope Francis 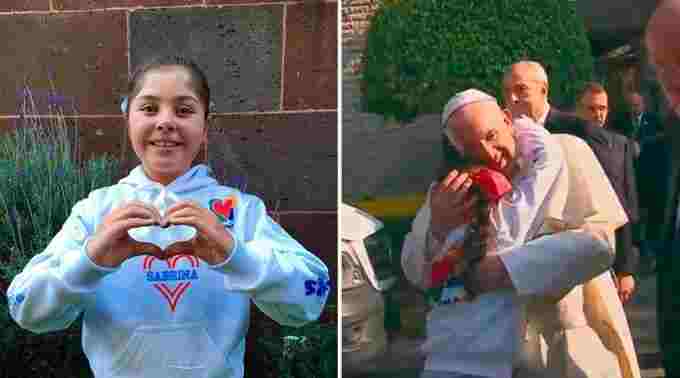 Sabrina and her mother, Karla Robles, were behind the crowd barrier outside the apostolic nunciature in Mexico City when the Pope visited there Sunday.

When the Pope left the nunciature, the people began to push forward. Sabrina saw her chance.

“Then she began to run towards the Pope,” Karla said.

Sabrina passed through the security fence outside of the apostolic nunciature in Mexico City and ran towards Pope Francis. She hugged him forcefully.

“I was very excited,” Karla said to CNA. “Sabrina told me ‘I hugged him! I hugged him!’ She was very happy. She slept with a rosary distributed to those who were near the Pope. She was even asking why the Pope had to live in Rome.”

The young girl has a disease called hypoplastic left heart syndrome, a disability in which one side of the heart does not develop. She has had four operations and depends on the intervention of doctors to survive.

Her mother told CNA that the girl can do the same daily activities as any other person, although she tires more quickly. She also can’t exercise much.

Her family has help from the Kardias Foundation, which cares for children with heart issues.

Thanks to the foundation, both Sabrina and her mother were able to wait for the pontiff outside of the nunciature. They were joined by with nine other children and their parents.

“We were fortunate to be in front of the door, where they seated us,” Karla said. “I did not know it, but the yellow section was for the sick. The Pope knew that they needed his greeting and blessing, I think that’s why he came.”

Karla said that Sabrina is now more interested in the Catholic faith. She is “very proud to have had this opportunity.”

It was very emotional for me. It is a memory that will last a lifetime,” Karla said.