The Year of Mercy: What’s it all about? 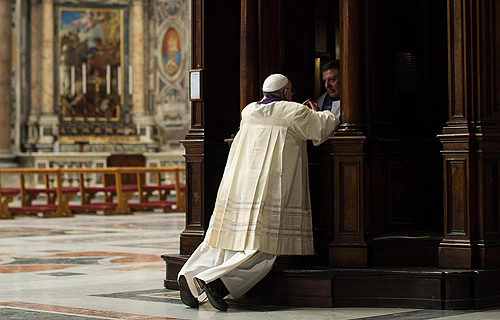 Pope Francis' confession during a mass at St Peter's basilica on March 28, 2014 at the Vatican ANSA/OSSERVATORE ROMANO ++ NO SALES, EDITORIAL USE ONLY ++

By Ann Schneible. Vatican City, Dec 7, 2015 / 05:00 pm (CNA/EWTN News).- One of the central aims of the Jubilee of Mercy will be to reorient the Sacrament of Confession back to the center of the Church's pastoral life, explained one official involved in organizing the year-long event.

“Mercy is the tangible expression of God's love in the world,” said Fr. Geno Sylva, official for the Pontifical Council for the Promotion of the New Evangelization (PCPNE).

“By placing ourselves in situations to reflect upon this love and to experience the grace of this love in the Sacrament of Penance and Reconciliation, (we find) the strength, the courage, and the compassion to be instruments of mercy to others.”

The Jubilee of Mercy is an Extraordinary Holy Year that will officially commence December 8 – the Solemnity of the Immaculate Conception – with the opening of the Holy Door in St. Peter's Basilica. It will close Nov. 20, 2016 with the Solemnity of Christ the King.

The Pontifical Council is charged with putting Pope Francis' vision for the Year of Mercy into practice – both in the Vatican and abroad.

“The Holy Father wants the Jubilee of Mercy to be an opportunity to place the sacrament of God’s mercy – which is the sacrament of penance and reconciliation – into the central pastoral life for the Church,” Fr. Sylva said.

“We know that, unfortunately, Catholics don’t take advantage of the sacrament as much as they should, and so this is an opportunity for us to remind people of God’s desire to forgive us and that he’s always there to forgive us no matter the sin.”

To help emphasize the role of the Sacrament of Penance during the Jubilee, Pope Francis has called the Church to send out “Missionaries of Mercy” – priests with the faculties to pardon sins in cases otherwise reserved for the Holy See.

These priests, whom the Pope will send out on Ash Wednesday, 2016, will serve as “a visible sign of the importance of the sacrament of reconciliation in our lives of faith,” Fr. Sylva said.

“It is the responsibility of the (Pontifical Council) to select the Missionaries of Mercy,” Fr. Sylva said. He explained that many of those selected have applied to the Council, along with a letter of recommendation from the bishop showing how they “epitomize and embody” a missionary of mercy, as described in Pope Francis' Bull for the Jubilee released earlier this year.

He added that some priests selected as “Missionaries of Mercy” did not apply, but were recommended to the Pontifical Council.

Pope Francis has extended the sacrament of confession's availability to the world in other ways as well. For instance, all priests will automatically have the faculties to remit the penalty of excommunication attached to the sin of abortion, without having to receive permission from their bishops. The Pope has also granted faculties to priests of the Society of Pius X to hear confessions during the Jubilee as a step towards reconciling the traditionalist fraternity with the Holy See.

One of the characteristics of any Jubilee Year is the opening of Holy Door in St. Peter's Basilica, which allows those who pass through to obtain a plenary indulgence under the usual conditions. The official “Holy Doors” are only found in the four major basilicas of Rome. For the Jubilee of Mercy, however, Pope Francis has asked that the tradition of the Holy Door be available at the local level.

“The Holy Father has stressed that this Jubilee is not only to be celebrated in Rome but in all of the particular churches of the world,” Fr. Sylva said.

“This is why he has asked every bishop in the world to choose in his diocese a Holy Door, a Door of Mercy, so that all people may have a chance to make a pilgrimage through a Door of Mercy.”

“Each of the Jubilee initiatives is an invitation to bask in what Pope Francis has called the balm of God's mercy,” Fr. Geno said.

The Pontifical Council for the Promotion of the New Evangelization is overseeing visits to the Holy Door in St. Peter's Basilica, and encourages pilgrims to register at their website.

“Because there’s going to be so many people that’ll want to get through the Holy Door, we just want to make sure that it’s really prayerful,” Fr. Sylva said. “It’s a spiritual journey of conversion that people are making, and so it’ll be reserved and people will be given enough time.”

In addition to approving “missionaries of mercy” and helping pilgrims cross through the Holy Door of St. Peter's, the Pontifical Council is also tasked with charitable initiatives worldwide.

For instance, Fr. Sylva explained, the Pope has asked the council to establish an agricultural college in Burkina Faso, West Africa, which teaches young people to provide for themselves through agriculture.

“The Holy Father would like us to leave behind, after the Jubilee of Mercy, really concrete signs of God’s mercy, he said.

The Pope first announced the Year of Mercy on March 13, the second anniversary of his pontifical election, during a Lenten penitential liturgy in St. Peter’s Basilica.

On April 11, the Holy Father officially proclaimed the Jubilee Year with the release of the Bull of Indiction.

Mercy is a theme that is dear to Pope Francis, and is the central topic of his episcopal motto “miserando atque eligendo,” which he chose when ordained a bishop in 1992.