The ‘theology of the people’, according to Pope Francis 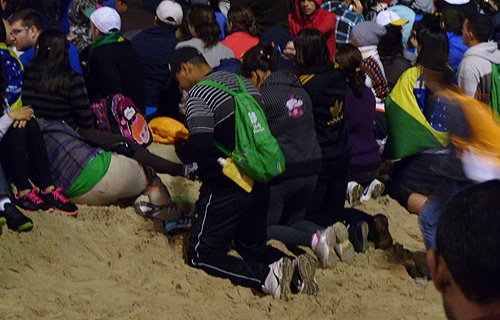 By Andrea Gagliarducci. Vatican City, Apr 27, 2015 / 03:38 pm (CNA/EWTN News).- In a previously unpublished 2012 lecture, Pope Francis explains the inner sense of the ‘theology of the people,' emphasizing that popular piety is the antithesis of widespread secularization.

The lecture has now been published for the first time, in the Italian edition of “An Introduction to the Theology of the People,” by Argentine theologian Ciro Enrique Bianchi, a pupil of Victor Manuel Fernandez – rector of the Catholic University of Argentina and one of Pope Francis' closest collaborators.

The book was conceived as a theological and spiritual profile of the Argentine thinker Rafael Tello, considered one of the founders of the 'theology of the people' which Pope Francis holds in high esteem.

While Archbishop of Buenos Aires, then-Cardinal Bergoglio wrote the foreword to the original, Spanish edition of Bianchi's book on 'theology of the people' and held a lecture at its official presentation. This lecture zeroed in on “the faith of our humble people,” and has been used as the foreword of the Italian edition; excerpts were published
April 27 in Avvenire, the Italian bishops' daily paper.

Cardinal Bergoglio wrote that Latin America was largely characterized by poverty and Christianity, and that this latter is expressed by various and colourful forms of popular piety such as processions, vigils, and public prayer.

“When we approach our people with the gaze of the good shepherd, when we do not come to judge but to love, we can find out that this cultural way to express the Christian faith is still present among us, especially in our poor,” he said.

Pope Francis explained that the notion was subjected to an evolution in the course of the years: at first, it was labeled “popular religion,” then Bl. Paul VI called it “popular piety,” and finally the 2007 Aparecida document called it “popular spirituality.”

Aparecida was the site of the fifth general conference of Latin American bishops, and its final document addresses the major issues facing the Church there, focused on missionary work.

According to Cardinal Bergoglio, “popular spirituality is the original way through which the Holy Spirit has led and continues to lead million of our brothers,” and this was clearly acknowledged in Aparecida.

The Pope recounted that “four days before the final vote on the draft, this latter had received 2,400 ‘modi’, or amendments, which had to be solved within those days”; but the chapter on popular spirituality “was subjected to only two or three observations, and they were all stylistic, secondary observations.”

“That chapter was proposed exactly the way it came out from the commission, which told all the bishops at the conference, 'this is a sign',” wrote Cardinal Bergoglio.

The then Archbishop of Buenos Aires also identified “popular piety as the disclosing of the memory of a people,” and emphasized the good example of José Gabriel Brochero, a popular Argentine priest who was beatified in September 2013.

Pope Francis recounted having been for two years a confessor at the Jesuit house in Cordoba, Argentina, “in the heart of downtown, beside the university,” where he heard the confessions of “university students, professors, and people from the suburbs who prefer to confess downtown since their parish priest has no time to hear confession on Sundays, since he celebrates one Mass after another.”

Among the penitents, Cardinal Bergoglio said he noticed that “there were people who confessed well: they only said what was needed, they never said something more than their sins, and they did not brag; they spoke with much humility.”

Once, Pope Francis asked one of these people where came from, and he said: “From Traslasierra,” the land where Fr. Brochero preached. So “there was the catechetic memory of Cura Brochero in a people, who expressed this in the Sacrament of Reconciliation.”

Pope Francis added that “popular piety comes from the memory of the people,” and “as the Catholic Church has made a preferential option for the poor, this should lead us to know and appreciate their cultural way of living the Gospel.”

“It is good and necessary that theology cares for popular piety” since it is “the precious treasure of the  Catholic Church in Latin America, as Benedict XVI put it when he inaugurated the Aparecida Congress.”

In the end – Cardinal Bergoglio maintained – “when we approach the poor to accompany them, we understand that they live life in a transcendental sense, beyond the huge daily difficulties. In some ways, consumerism has not enclosed them.”

Their life “reaches out for something beyond this life. Life depends on Someone, and this life must be saved. This is what we found in depth of our people, even if (our people) are not able to express it.”

In the end, Pope Francis said, “the transcendent sense of life glimpsed in popular Christianity is the antithesis of the secularism that is spreading in modern societies.”