The little girl who forgave ISIS 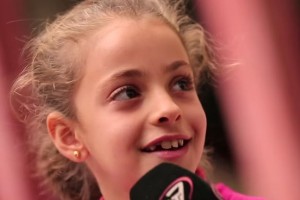 If you haven’t seen this powerful video of hope and forgiveness, you should.

SAT-7, a Christian TV channel that broadcasts in the Middle East and Africa, interviewed a young girl named Myriam, who fled from Qaraqosh, which up until last year was the largest Christian city in Iraq. Militants from the Islamic State overtook the city in August last year.

Myriam tells the local reporter about her experience in recent months.

“We used to have a house to live in but not now. However, thank God, He provides for us,” the young girl says. “God loves us and did not let ISIS kill us.”

The reporter then asks Myriam how she feels towards the members of the Islamic State. She responds, “I wouldn’t do anything to them, I only ask God to forgive them.”

“You forgive them?” he asks, and the girl replies without hesitation, “Yes.”

The whole video is worth watching, but the part about forgiveness comes just after the 1:00 minute mark: