THE ‘JOSEPH’ IN FRANCIS! 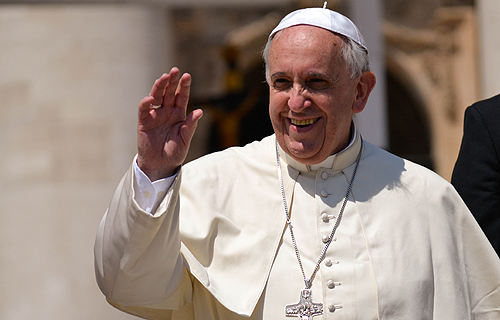 Exactly five years ago, on 19 March 2013, Pope Francis began his Pontificate. It was the Feast of St. Joseph, the Patron of the Universal Church. For Pope Francis, the Feast was not a mere coincidence; it was a clear message to the Church and the world, that he wanted his Pontificate to be modelled on the person and message of St Joseph (together with St Francis of Assisi).

His homily at the Inaugural Eucharist focused on St Joseph. “In the Gospels, St Joseph appears as a strong and courageous man, a working man, yet in his heart we see great tenderness, which is not the virtue of the weak, but rather a sign of strength of spirit and a capacity for concern, for compassion, for genuine openness to others, for love.” He continued saying, “We must not be afraid of goodness, of tenderness” Pope Francis further said “that exercising the role of protector as St Joseph did, means doing so discreetly, humbly and silently, but with an unfailing presence and utter fidelity, even when he finds it hard to understand. The Gospels present St Joseph as a husband to Mary, at her side in good times and bad, and as a father who watched over Jesus, worried about Him and taught Him a trade. St Joseph responded to his called to be a protector by being constantly attentive to God, open to the signs of God’s presence and receptive to God’s plans, and not simply his own.”

In focusing on the qualities of St Joseph, in his first homily, Pope Francis left no doubt that, he would be doing his best to imbibe some of these qualities personally. As one looks back at these five years, the ‘Joseph’ in Francis has certainly defined his Papacy, in many different ways.

“Who am I to judge?” that rhetorical question by Pope Francis is still music to the ears of many people. In the act of asking this question, Pope Francis threw open, the doors of mercy, acceptance and belonging wide open. Joseph, the good man that he was, also had doubts – that veered on being judgmental on Mary. However, he allowed God’s spirit to act and direct him.

On a similar note, in a homily at Casa Santa Marta before Christmas 2017, Pope Francis said, “St. Joseph gives us three key lessons as we walk with him to Bethlehem. Jesus’ father on earth knew ‘how to walk in darkness’, ‘how to listen to the voice of God’, and ‘how to go forward in silence’.” Then speaking of Joseph’s struggle upon learning of Mary’s pregnancy, he continued, “Joseph fought within himself; in that struggle, the voice of God [is heard]: ‘But get up’ — that ‘Get up’ [which is heard] so many times in the Bible at the beginning of a mission — ‘Take Mary, bring her to your home. Take charge of the situation; take this situation in hand, and go forward.’ Joseph did not go to his friends to be comforted; he did not go to a psychiatrist so that he could interpret the dream. No… He believed. And he went forward. He took the situation in hand. What was the situation? What was it that Joseph had to take up? Two things: fatherhood, and mystery.” So reflective of the mission of Pope Francis today.

Joseph took with him Mary and Jesus and sought refuge in Egypt; Joseph experienced and understood the plight of refugees. Pope Francis often refers to the fact that he belongs to a family of migrants. A hallmark of Pope Francis has been his consistent concern for refugees and migrants. He has often reminded Christians that the Holy Family was also a refugee family. He has been urging all to welcome, protect, promote and integrate refugees and migrants. Pope Francis often refers to Joseph as a ‘dreamer’ capable of accepting the task entrusted to him by God.  In one of his earlier homilies he said, “Christians, especially young people, should follow the example of St Joseph who was not afraid to listen to his dreams, like when he was told in a dream not to be afraid to take Mary as his wife and again when he was told to flee with Mary and Jesus to Egypt. When we dream great things, beautiful things, we draw close to God’s dream, the things that God dreams for us. May he give young people – because he, too, was young – the ability to dream, to risk and to take on difficult tasks that they have seen in their dreams,” Pope Francis  is not afraid to ‘dream’ of a more compassionate, merciful, peaceful, inclusive, just and sensitive world.

“Pray for me!” said Pope Francis from the Papal balcony on the night of 13 March 2013, a short while after his election. With that personal request, he not only touched a chord with the thousands who had gathered at St Peter’s Square, but with millions all over the world. He has not ceased to ask people to pray for him, he has acknowledged his human frailties and given up several of the material trappings that in the past have been synonymous with the Papacy. He has sent strong messages to the hierarchy and to the clergy that he is first a servant and so are they. Like St Joseph, Pope Francis is humility personified.

Above all, Pope Francis has been regularly sharing a very personal secret. “I would like to share with you something very personal. I like St Joseph very much. He is a man of strength and of silence. On my desk in my room, I have a statue of St Joseph sleeping. While sleeping he looks after the Church. Yes, he can do it! We know that. When I have a problem or a difficulty, I write on a piece of paper and I put it under his statue so he can dream about it. He now sleeps on a mattress of my notes. This means please pray to St Joseph for this problem. That is why I sleep well: it is the grace of God!”

There is no doubt at all, that there is so much of JOSEPH in Francis!

*(Fr. Cedric Prakash SJ, works with the Jesuit Refugee Service on Advocacy and Communications, in the Middle East. He is based in Beirut, Lebanon. Contact: cedricprakash@gmail.com)