The Indispensable Role of the Laity in the Church – Should we wait for Vatican III to give Laity its rightful place? 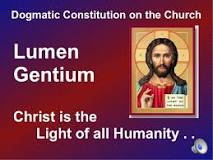 Chapter 4:31 of Dogmatic Constitution on the Church LUMEN GENTIUM, promulgated by his holiness Pope Paul VI on November 21, 1964  defines "Laity" as all the faithful except those in Holy Orders and those who belong to a religious state approved by the Church. That is, the faithful who by Baptism are incorporated into Christ, are placed in the People of God, and in their own way share the priestly, prophetic and kingly office of Christ, and to the best of their ability carry on the mission of the whole Christian people in the Church and in the world.

When Pope John XXIII began the historic session of the Second Vatican Council on October 11, 1962, one fact became very clear – that there was an urgent need to pay more attention to the role of the Laity in the Church.  All the constituents at the Council including some theologians and observers realized that in most participatory/decision-making matters of the Church, the Laity’s role was mostly to just “Pay, Pray and Obey”. From this realization, on 21 November 1964 at the Council session, Pope Paul VI introduced LUMEN GENTIUM which means “Light of the Nations.” One year later on November 18, 1965 he expanded on this teaching by promulgating "The Decree on the Apostolate of the Laity", where he exhorted the Laity to preach the Good News of Jesus throughout the world and actively participate in His Royal, Priestly and Prophetic role.  In this regard, St. John Paul II, in his post-synodal apostolic exhortation Christifideles Laici, based the lay apostolate on the mystery of the Church: “I am the vine and you are the branches” (Jn 15:5; CL 20). The lay people are sharers in the priestly, prophetic, and kingly mission of Jesus Christ (CL 29).  He states: “Thus for the lay faithful, to be present and active in the world is not only an anthropological and sociological reality, but in a specific way, a theological and ecclesiological reality as well” (CL 15).

Therefore it has been destined by God that members of the Laity perform multi-faceted worldly and cultural responsibilities. Through their ordinary family and social life, they strengthen their existence by engaging in every profession, work and business of the earth. There they are called by God that, being led by the spirit to the Gospel, they may contribute to the sanctification of the world, as from within like leaven, by fulfilling their own particular duties. In this way, they manifest Christ to others by giving witness through their faith, hope, and charitable lifestyle (LG-Chapter 4:31).

All members of the laity have the exalted duty of working for the ever greater spread of the divine plan of salvation to all humans, of every epoch and all over the earth.  Therefore they should be given many opportunities to share diligently in the salvific work of the Church according to their ability and the needs of the times (LG-Chapter 4:33).

Members of laity should express to their pastors/bishops their needs and desires with that liberty and confidence which befits children of God and brothers & sisters of Christ.  Based on their knowledge, abilities or extraordinary skills in their respective areas, it is their divine duty to express their opinion in the larger interest of the Church (LG-Chapter 4:37).

Based on the above promulgations, it is only fair that parish priests and bishops realize that they should treat members of the laity with respect so that they voluntarily come forward to take up responsibilities for the spread and development of the Church. Each individual layperson must be a witness before the world to the resurrection and life of the Lord Jesus, and a sign of the living God. All together, each one to the best of his/her ability, must diffuse in the world the spirit which animates the poor, meek and peace-makers whom the Lord in the Gospel proclaimed blessed. [LG-Chapter 4:38].

According to Nigerian Cardinal Francis Arinaz (in 1965 he was the youngest bishop of the world at the age of 32), the essential feature of the layperson’s role is the vocation to bring the spirit of Christ into the arenas of secular life from within, i.e. into the family, work and profession, trade and commerce, politics and government, mass media, science and culture and national and international relations.

On 10 August 2012, in his special message on the occasion of the Sixth General Assembly of the International Forum of Catholic Action, Pope Benedict XVI further reiterated on the indispensable role of the Laity. He wrote: Co-responsibility demands a change in mindset especially concerning the role of lay people in the Church. They should not be regarded as “collaborators” of the clergy, but, rather, as people who are really “co-responsible” (equal partners) for the Church’s being and acting. It is therefore important that a mature and committed laity be consolidated, which can make its own specific contribution to the ecclesial mission with respect for the ministries and tasks that each one has in the life of the Church and always in cordial communion with the bishops. The pre-requisite for Communion with Bishops is two-way communication (most Indian Bishops practise one-track communication). Communion without proper communication is a non-starter.

Quoting Lumen Gentium he wrote:  “Many benefits for the Church are to be expected from this familiar relationship between the laity and the pastors. The sense of their own responsibility is strengthened in the laity, their zeal is encouraged, they are more ready to unite their energies to the work of their pastors. The latter, helped by the experience of the laity, are in a position to judge more clearly and more appropriately in spiritual as well as in temporal matters. Strengthened by all her members, the Church can thus more effectively fulfil her mission for the life of the world”.

He further wrote: May your life be “transparent”, orientated by the Gospel and illumined by the encounter with Christ, loved and followed without fear. Make your own and share the pastoral decisions of the dioceses and parishes, fostering opportunities for meeting and for sincere collaboration with the other members of the ecclesial community…… Cultivate authentic personal relations with everyone, starting with the family, and offer your readiness to participate at all the levels of social, cultural and political life, constantly aiming for the common good.

Keeping in view Common Good, Laity must ensure there is financial transparency in each parish and Lay Association, by ensuring proper checks and balances to monitor receipts and payments; and by having Assets Registers to scrutinize additions and sale/write-off of assets. For this a monitoring authority is a must.  For example Parish Finance Committees in each parish (this is not the case now – bishops are looking the other way) and an Advisory Body comprising experts for each lay association to raise alarm bells in cases of gross violation of standard norms. The President of a 100+year-old lay association in Bengal has been dragging his feet over the handover of accounts including cash and bank books to the incumbent office bearers, even after three months' expiry of his team’s office tenure. He continues to be Archbishop’s nominated Secretary of Archdiocesan Laity Commission and to top it, Treasurer of another all-India Catholic Association! He claimed that accounts were done for years without cash and bank books and therefore he cannot handover any such books of account!! The Archbishop who is the ex-officio Chairman of the Association is allowing the situation to escalate. A staff member serves customers at the Dhaka headquarters of the Christian Cooperative Credit Union in this 2017 file photo. (Photo by Stephan Uttom/ucanews.com)

In Bangladesh there was a huge uproar over the mismanagement of Dhaka-based Christian Cooperative Credit Union Ltd (CCCUL) which reportedly handles funds worth Taka 612 crore (https://www.ucanews.com/news/catholics-arrested-for-defaming-bangladeshi-cooperative/83310). Several disgruntled members who protested over the state of affairs were put behind bars for months and were released on bail with the tacit intervention of the Bangladesh Cardinal. These incidents show that Laity cannot be complacent and they need to be ever vigilant in keeping with the adage "eternal vigilance is the price of liberty."

Laity’s role is to protect the environment in keeping with Pope Francis’ Laudat Si; to ensure mother and child development and arrest malnutrition in each parish/locality; to care for the aged; to try and settle issues through dialogue – for this a Crisis Management Cell in each parish is a MUST.  Normally there is a tendency to sweep burning issues under the carpet. This might in some cases, lead to volcanic eruptions and adversely impact both the perpetrator and the protector.

Considering the Laity constitutes 99% of the church (according to Bishop Stephen Lepcha, Bishop of Darjeeling Diocese and Chairman of Bengal-Sikkim Regional Laity Commission), it is high time the Indian Church Hierarchy reads the signs of times and invites the Laity as Co-partners in all facets of spiritual and temporal/financial matters before we see empty pews. By the time Vatican III is convened, it will be too late then..