The Glow On Her Face! Dr Suresh Mathew (Indian Currents) 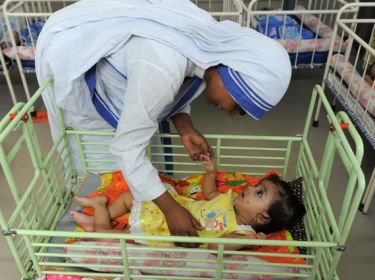 I owe the most happy event of my life to the Missionaries of Charity (MoC). The joy of the moment that came about two decades ago, when a sister from the MoC had put a four-month old sleeping baby in my arms, is beyond the realm of words. It can only be felt and empathized, especially by those, who are childless. A thrill went down my spine; a gush of anxiety and joy stirred my inside. As my husband took her in his arms, she opened her eyes, smiled at us, as if saying, “So, finally, you have come.” I found myself profusely kissing her as tears of joy and gratitude rolled down our faces. Even today not a day goes without me re-living that moment and saying a silent “Thank you Sisters.”

I am speaking up today because I need to break many a myth and canard being spread against the MoC sisters, as they are winding up their adoption centres across India to pre-empt a conflict between their beliefs and core values and the law of the land.

Just in case it helps, let me brazenly announce that I am a Hindu and not a Christian. My religion was no issue in my adopting a child from the MoC.

It was probably God’s will that we struck an instant friendship with MoC sisters. Two of the three sisters, whom we met on road, in the most unlikely place belonged to my husband’s village.  Our interactions continued on social and personal level till one day we had to face a harsh reality about our lives. Doctors had told us that it would be difficult, if not impossible, for us to have natural children. They recommended surgeries and prolonged and expensive treatment. I instantly knew that such treatments have very low success rates. Going for these would also mean losing more years of life in waiting for a child and disturbing our careers. Also, we, as a couple, had already decided to have a child and adopt one. So, probably God wanted to test out resolve. Psychologically, we were ready to become parents.

We shared our thoughts with our Sister friends. Since, they knew both of us well they directed us to an MoC adoption centre. This way the mandatory home checks were bypassed in our case. On the fixed day, we reached the place. It was a large premise, housing the aged and the infirm abandoned by their families, mentally retarded children and the normal babies not wanted by their parents. My heart was beating fast while waiting for the mother superior. We had already checked with a lawyer for documents which are required for adoption – a marriage certificate, age proof, income proof and medical reports.

The Mother Superior came. After exchanging pleasantries she straightaway asked us about the purpose of adoption and other details. But I felt that her mind was somewhere else as she was repeatedly looking at me from the corner of her eye even though she mainly spoke with my husband. Later I realized that she was assessing my facial features to make up her mind as to which baby looks closer to me and should be given to us.

She told us to wait till she comes with our child. I remember both of us saying prayers and holding hands tightly, as the sister took her time. Let me make it clear that MoC sisters do not exhibit the babies like wares for the adoptive parents to choose from. One is not allowed inside the nursery. They will make the best possible decision for you in terms of matching features of the adopted child and you have to trust them. Those saying no and wanting to see more babies are politely turned away.

Our baby had come wrapped in a pink cloth; wore an over-sized pink frock and her eyes were rimmed with kajal. There was no need to speak as our actions conveyed to the Sister that this was our baby. After allowing us ten minutes of togetherness, the sister took her away and told us to do the paper work and shopping for carrying our baby home.

My feet had got wings. As we moved out of the MoC premises, I felt as if I was flying. The visit to lawyer – a dignified gentleman who spoke very less and never made inquires after sisters’ whetting – was a pleasant experience. He readied papers for us to take the child `in custody’ till final legal adoption. This took about two hours. We rushed to the market; picked up dresses, a pram, baby food, feeding bottles, nappies, grooming sets etc. It was almost five pm and we were headed for MoC home, once again.

The Mother superior offered us lassi and ladoos, probably, she knew that in the excitement of becoming parents, we had simply forgotten to eat! We handed over a bagful of essentials for our baby to another sister. She told us to come next morning. I was probably naïve and so overwhelmed to make that offer –“Sister, I want to make a donation,” I impulsively said. Her reply was firm, “We do not take donation from people who come to take their baby from us.”

The house was going through renovation. As we were told to come for our baby the next morning, the mason and workers came to the sister to ask for wages. She was calculating and I quickly quipped,” Please allow me to pay them.” The sister smiled and said okay. It was a paltry sum but somehow I felt good.  Of course, I realized that I can make the donation to their central funds whenever I want.

That was the longest night for us. My husband I kept talking about our baby, fixing a name to choosing a school for her etc. In between I would try to read some chapters from Dr Benjamin Spock’s bestseller book Baby and Childcare to graduate overnight at least as an informed mom.

Next morning, we carried ladoos, biscuits and some fruit for the Home. My baby had come dressed in the clothes that we had brought for her. We went to the chapel and prayed with tears, emotions and gratitude. I remember, the Mother superior hugging me and wiping her tears. All the grown up children – most mentally challenged ones – were being told that ‘L…’ (her name in the Home) was going with her parents to her home.

The sisters kept in touch with us rather discreetly – never giving us a feeling that they are judging us as parents and preparing a feedback report that was required for legal adoption. A year later we did all the legal formalities for adoption in the court. That day in the court another couple – Punjabi Hindus – were also present. We exchanged smiles and brief introductions. I was amazed to see the likeness between the bubbly child and the parents!

Over the years, the bond between the sisters and our family has become stronger. It’s beyond the transnational or legal bonds that the law on adoption seeks to make it out to be. They keep inquiring about my daughter’s growth, her schooling, achievements etc., and I visit their homes whenever I feel like giving it back to the society. When I analyse my experience, I realize that the Sisters had acted in the interests of the child – in asking us about our age, our incomes and our health conditions. In spite of knowing us personally, they had kept a discreet watch on us before finally allowing us to adopt our baby legally.

And why the Sisters do not believe in giving away children to single parents was made clear to me much earlier than the present controversy. When our daughter was about two-year-old and we happened to visit one of their homes, one sister had told me, “Look at the glow on her (my daughter’s) face, our children (in orphanages) are healthy, well-fed and loved by us but since they do not live in a normal family this glow is missing from their faces.”

It’s that glow which the MoC sisters feel will be missing from the faces of their children in case they are given to half families.

( As told to an Indian Currents Reporter)