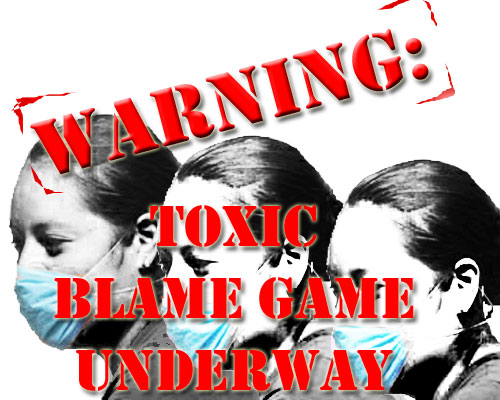 Swami (Dr) Snehananda Jyoti has sent us a very thought provoking article on Blame Game. Swami Snehananda Jyothi spent most of his life in USA, working as a clinical psychologist. Quite attracted in distinct philosophies, he founded the 'East-West Awakening Ministries', which means an effective sharing of the philosophies of East and West. He also established four EWA Centers in USA and India.  He lives what he says and that makes him always distinct -Joseph Mattappally, Associate Editor.

In an earlier article I have mentioned that reformers themselves need to be reformed before they go about the business of reformation. As Gandhiji said, they need to be the change that they are working for. They need to discreetly model the change that they are looking for in their own life and surroundings. In other words, we have to walk the talk. The compelling need for change has to come from within so our voice would have an inner authority of service coming from a relentless search for truth. That way we truly sound authentic and genuine. It is not them versus us. We are all in it together. The Idukki bishop, for instance, seemed to have put his foot into his mouth when he talked about Catholic girls too willing to let go of their religious up-bringing/vales when they fall in love and get married to Hindu boys. He voiced the concern and fear of many Christians. We need to ask ourselves a question, though. What happened to the rigorous training Catholic girls and boys received at least for 18 years before their marriage?

Was that training according to the mind and teachings of Christ? These boys and girls come from our families. They are our relatives. The church leaders including bishops are also our relatives. We rarely take on the priests and the bishops when we get an opportunity. Because we do not want to rock the boat. What are we afraid of? What about the prophetic role that Christ has given us through his teaching?! The aforesaid bishop pointed out a symptom. Yet he has not pointed out, to my knowledge, other symptoms. For instance, many poor Catholics in his diocese joining other Christian denominations that are mostly Pentecostal. Or there are quite a few poor Catholics committing suicide in Bisonvalley Panchayat in which, it appears, most suicides in Kerala take place.  Dabbling in politics and aligning opportunistically with a political party to pit one Catholic candidate against another in the recent parliamentary election was not kosher. Or, for that matter, a Catholic parish school is competing with a public school started earlier by mostly prominent Catholics in the same parish with the blessings of the Church authorities. This unhealthy competition resulted in bringing another Catholic Church of another rite into the area. The point that is made is that opportunism, not solid Christian and moral values, often guides important decisions. All these symptoms point out to a syndrome of pharisaism (hypocrisy) indicative of spiritual bankruptcy, chaos and confusion, lack of vision and direction. We can rant and rave against individual bishops. There are also good bishops including the Pope. The Pope certainly is a whip of fresh air giving some hope in a stuffy and suffocating Church. In our enthusiasm we can heap all kinds of praises on him.

As someone who had the same kind of training as he had in the Society of Jesus (Jesuits), I am waiting for signs of some substantive changes related to major issues such as women’s ordination to the priesthood, married priesthood, family life especially in the context of same sex marriage, democratizing the entire Church, not just the semblance of democracy in the election of popes, and unity of Christians (ecumenical issues) facing the Catholic Church. I do not think he was wise in the outright rejection of women’s ordination as there is no real theological objection to women priests. While his ministry of reconciliation paving the way for bringing USA and Cuba together over a half-century of bitter alienation was truly admirable, I think he lost a wonderful opportunity to build a bridge between Communism and Christianity when he was presented recently by the Bolivian president a crucifix on hammer and sickle designed by a Jesuit martyr.

I also realize the very difficult, almost impossible, reality of the Pope moving all the people of the Church with him. But he also has to be realistic in that he cannot please everybody and dance around major issues as his immediate predecessors have done. Currently he has an enormous capital of admiration and good will. He has a certain amount of time to do God’s will Meanwhile what can we do? We have to be part of the solution and not part of the problem. That means we continuously engage in discernment and expand our own awareness. The kind of meetings distracted by so many things that we have right now may not be of much use for spiritual growth. We may need prolonged period for in-depth sharing and prayerful reflection. What we need now may not be new institutions but use already existing ones. We are not here to sensationalize certain issues and celebrate individual victories. We are here to do a job and not take credit for who did what. We need to question the shallowness and ignorance or integrity of certain reformers in our own rank. We cannot wash our hands by disclaiming responsibility for their own lack of awareness and knowledge. We need to give the same empathy that we give to ourselves. When we try to reform an entity that stands in the name of Christ, we need to have enormous humility, and employ the same spiritual methods taught by Christ and not follow the ways of the world. We may have our own axes to grind. So working through our own issues before we reform others will be very important. Respect for facts and purity of intention in everything is of paramount importance.