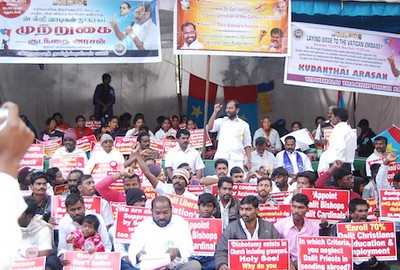 “Untouchable” Catholics in the southern Indian state of Tamil Nadu on Monday urged the Vatican to eradicate caste discrimination within the Indian Church.

In a petition delivered to the Vatican embassy in Delhi, a group of Tamil Catholics belonging to several dalit organizations and a Tamil political party called for Vatican intervention.

Dalits, or untouchables, are the lowest caste within Hindu society. Huge numbers of dalits have converted to Christianity and Islam over the decades, though the religions offer limited protection from societal prejudice.

“Dalits are the majority in the Christian community and still they are not given proper representation in the church at any level,” said Vinod Kumar, secretary of Viduthalai Tamil Puligal Katchi.

According to Kumar, dalits make up 70 percent of India’s Christian population.

Activist Franklin Caesar, who accompanied the group to the Vatican embassy, told ucanews.com that the Indian Church talks about unification but makes few true efforts to improve the situation.

Even within Hinduism, said Caesar, dalits have been allowed into the inner sanctum of the temples but are still blocked from such areas inside churches.

“The Christian converts from the upper caste rule the Indian Church and the dalits do not get promoted,” he added.

At a protest held before the delivery of the petition, the group handed out pamphlets condemning Pope Francis’ scheduled visit to Sri Lanka next month.

“The Pope should not go to Sri Lanka during election time. Why is he going there?” said Kumar.

The elections are scheduled for January 8, 2015.

Kumar said that the pope’s January 13-15 visit to Sri Lanka will be a boon for its president Mahinda Rajapaksa, whose regime has been accused of widespread human rights abuses including those committed against ethnic Tamils during the country’s civil war, which ended in 2009.

Rajapaksa is seeking an unprecedented third term and Catholic leaders have warned that the visit will be used as propaganda.

“The Pope’s visit will help Rajapaksa win the elections as the latter wants to justify to the world that he is a good man,” Kumar said, adding that Christians in Sri Lanka could be easily influenced to vote for Rajapaksa due to the pope’s visit.

“Inviting the pope to Sri Lanka is a planned strategy by Rajapaksa which the pope has fallen into,” he added.