Take a third way, neither Left or Right! Pope Francis has criticised both  left and  right’s  politics. 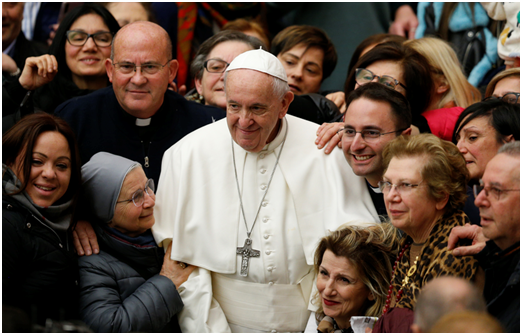 In an essay for The New York Times last November, Pope Francis exhorted us to “dare to create something new.” With the coronavirus pandemic reaching new heights, he challenged us to reject a strain of selfishness fed by a distorted ideology of personal freedom.

This is in continuation of last post(ccv.feb.10). The POOREST, — poorest!, poorest! Yes Good-news to the poor of Jesus’ Nazareth Manifesto, to the last, least, lost, ignored on the periphery (a poor church for the poor)  —  is the place to begin, stays firm Francis!

It is this leading role Francis plays to bring UNITY in  universality of mankind first without religious  divides of Christian or Muslim, which alone guarantees true CATHOLICITY, true human brotherhood, true ‘Fratelli tutti’ that Francis promotes, irrespective of bitter attacks from Right and Left,  like salvation in Christ/Bible alone or in Allah/Quran alone!

For that, bitter critics call him anti-Christ, anti-Christian, anti-Catholic, unfit to be Pope, head of Catholic Church! Did Jesus establish any Church, Cristian or Catholic? Jesus was made Christ, the “anointed” by Saul of TARSUS long after Jesus’ crucifixion.

The living Jesus described himself as SON OF MAN, some 85 times in the Gospels, identical with ‘Fratelli Tutti’ of Francis! Of course, even while live he was crowned with unforgettable juicy titles like “Winebibber, friend of drunkards & prostitutes, bastard, son of bitch” etc. all according to each one’s perception!

Human unity and fraternity is first and foremost. Any faith-based bond that breaks it – that happened in US – must be rejected! In other words, holding on to organized religions is the curse of divisions everywhere.

We can only hope and pray that human UNITY that Francis promotes is achieved, instead of himself becoming a poor victim for bearing witness to TRUTH like Jesus, or the Last Pope as the NECESSARY result,  Nostrdamus predicted! james kottoor, editor ccv.

The coronavirus has unmasked the true nature, as if it were not already obvious, of the populism associated with the far right. As Francis observes in his new book Let Us Dream, “various kinds of populism” neither act in the interests of ordinary citizens nor develop their agency; rather, this strain of populism embraces a worldview that “reduces the people to a faceless mass it claims to represent.”

This is fake populism, for power remains with members of the very plutocratic elite class that this ideology claims to despise.

Francis warns that we must not simply defend the status quo. A soulless, technocratic liberalism has created the soil in which destructive populism has germinated. This liberalism’s conceptions of liberty and equality have become untethered from fraternity and a vision of a truly common good. Especially after Covid-19, neither soulless liberalism nor fake populism will meet our needs. As Francis notes, “only a politics rooted in the people, open to the people’s own organization, will be able to change our future.”

Francis warns that we must not simply defend the status quo. A soulless, technocratic liberalism has created the soil in which destructive populism has germinated.

The breakdown in fraternity and a lack of concern for the common good recently brought the United States to a political cataclysm, culminating in an unprecedented storming of the Capitol by armed insurrectionists.

For the first time in modern history, an American president who had lost re-election was prodding his supporters to reject the outcome, despite the vote being certified as free and fair by members of his own political party and administration. This crisis was resolved, in large part, by the extraordinary courage and commitment to democratic values of relatively unknown Republican officials at the local level.

As Francis reminds us, “our lives are woven together and sustained by ordinary people—often forgotten people,” who “without any doubt are in these very days writing the decisive events of our time.”

Our descent into increasingly hostile political division has taught us that neither the state nor the market can generate the fraternity we need. Indeed, as Francis further explains, both the “laissez-faire market-centered approach” and “welfarism” have eroded the bonds of civil society. Reweaving them will require behavior changes by politicians, but it is a process that must begin at the grass roots.

Francis calls for nothing less than a Copernican revolution in our understanding and practice of politics, one in which ordinary people are not a hard-to-reach “periphery” but the center around which the rest of the firmament revolves.

For this reason, the primary audience for Let Us Dream includes ordinary citizens and the institutions in which they organize. The book was written in collaboration with Austen Ivereigh, who previously worked with Citizens UK—which is a sister organization of the Industrial Areas Foundation, the largest and longest-operating community organizing coalition in the United States. (Listen to an interview with Mr. Ivereigh about the book on America’s “Inside the Vatican” podcast.) The “inclusive populism” of community organizing is a practical embodiment of Pope Francis’ vision.

Francis calls for nothing less than a Copernican revolution in politics, one in which ordinary people are not a hard-to-reach “periphery” but the center around which the rest of the firmament revolves.

Community organizing has two crucial features that ensure the poorest citizens have agency. First, it is institution-based. Across almost a century of community organizing, both religious and secular organizers have found religious congregations to be the most resilient and powerful institutions on which to build what veteran organizer Ernesto Cortés Jr. calls “a graduate school to teach people how to participate in politics and shape their communities’ futures.”

As Mr. Cortés explained in an interview with Rev. Ritchie: “Citizens are formed through the process of organizing. It requires institutions which can incubate this process by passing on the habits, practices, and norms necessary for humans with different opinions and temperaments to flourish together: to compromise, to talk to and not just about one another, to act in the light of one another’s views and needs and not just unilaterally or selfishly.”

Second, community organizing is inclusive. When creating alliances, institutions must be willing to work with those of different cultures and convictions. In Let Us Dream, Francis condemns the “horrendous” police killing of George Floyd and praises the protests it generated. But he also warns that such “awakenings of consciousness” run the risk of being “manipulated and commercialized.”

It is a perceptive reading of the signs of the times. “Wokeness” should not be a term of abuse, used to trivialize the genuine awakening of anger at systemic injustice. But the events of recent months show that the voices and perspectives of the poorest are in danger of being drowned out by others who seek to promote their own agendas.

The political right is undergoing scrutiny, but note that the left has its own fake “populism,” which claims to act in the interests of ordinary people but in reality disdains their institutions and attitudes—particularly religious ones—as backward and outdated. On both sides of the Atlantic, left-wing political parties have been taken over by wealthier, more geographically mobile voters, while support from poorer citizens is gradually draining away.

The experience of community organizing cuts through both the right’s fake populism and the left’s dismissive condescension.

Rather than reflecting on whether the reforms they propose are solutions that poor and working-class people actually want and need, the left often attacks these voters for failing to understand and vote their “own interests,” which are often perceived in narrowly economic terms, without regard for the social and spiritual dimensions of human flourishing. The contempt and condescension these citizens perceive from many on the left, even if they are unintended, have become a powerful force for rallying new voters around charismatic populist figures on the right.

The experience of community organizing cuts through both the right’s fake populism and the left’s dismissive condescension. It teaches that solidarity is more contagious than prejudice is. It reminds us that extreme attitudes are more likely to spread when meaningful relationships are absent. This is why fake populism has tended to spread through the media rather than through face-to-face encounters; in contrast, when people work together on issues of common concern, mutual respect and solidarity are more likely to blossom.

In Let Us Dream, Francis urges the church to be more receptive to such popular alliances—accompanying them both practically and spiritually, without seeking to dominate. He identifies “labor” and “lodgings” as two of the key issues for grass-roots action. The success of the I.A.F.’s Living Wage campaigns, and its renewal of whole neighborhoods in New York and Baltimore through the Nehemiah Housing program, demonstrates the power of institution-based organizing. If parishes and dioceses heed the pope’s call to engage with new vigor in this work, it can play a significant role in the civic renewal that is so urgently needed.

It was fitting that the pope’s new book was released at the start of a very different Advent, during which Christians wait for a God who became flesh, not in a hub of worldly power but on its periphery. Francis’ vision of politics is shaped by this reality.

In his words and deeds, Francis is inviting us to build a different kind of politics that requires elected politicians to adopt a humbler and more responsive pose. But it requires that each citizen recognize that we share the responsibility for achieving it. The building of fraternity is a task for us all

The Rev. Angus Ritchie is director for the Centre for Theology and Community, and serves as a priest in the Anglican Diocese of London. His latest book is Inclusive Populism: Creating Citizens in the Global Age.