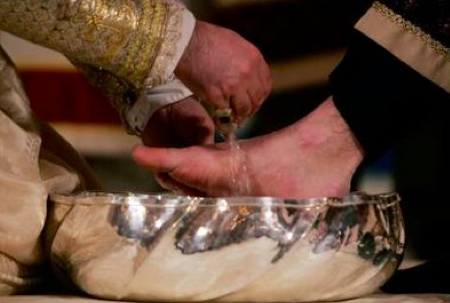 Non-Catholic churches in Kerala continue to hold the ritual, limited to only men and boys.

(Note: When Vivekananda visited Kerala he called it by its proper name:”Mad House.” Yes it is the home of crazy people both in religion and politics. There are 3 Churches or Rites  Syromalabar(SM),  Syromalankara and Latin  who call themselves Catholics and try to put up a façade of unity, collaboration and catholicity, but are torn apart internally on myriad issues, especially on questions of power and pelf, and each one does what it likes to get them.  Pope the supreme head of Catholics instructed already last January to include ladies and people of other religions in the “Foot-washing Ritual” on Holy Thursday. The Indian Latin Catholic Church which is made up of around 113 Lakhs understood it and are doing it. No place here to recount many instances of oriental churches ignoring Papal directions. The SM  which has  roughly  25 Lakhs  and Syromalankara  just around 2 Lakhs only, claim they have not understood what Pope said and are waiting for orders from their particular  Synods on what to do. In the meantime one parish priest of SM Church Fr Jose Vailikodath of the Blessed Sacrament Church, Cardinal Nagar, Kochi, went ahead obeying Pope rather than SM Cardinal and created big news in secular papers like Indian Express.(See yesterdays report in CCV) The two oriental Rites in Kerala are acting just like skeleton parties in a Manmohan-like coalition government. Catholic Church is made up of 1.2 billion or 120 crores. It is a coalition of 22 churches, 1st  being  Latin  Church with around 118 crores; 2nd, Ukrane church with 45  Lakhs, 3rd, SM church, with 25 Lakhs and  13th only Syromalankara with just around 2 Lakhs. Usually they don’t give their numberfs just to hide, they are not skeletons. As long as the oriental churches indulge in the dirty politics of

number game, number of bishops, dioceses and people they command and control in the name of Rites, there can’t be one Catholic Church in India. As long as craze for power and pelf are deep rooted in human psyche, it is nearly impossible to achieve catholicity. But nothing is impossible with God. james kottoor, editor)

Thiruvananthapuram: In a departure from an age-old custom and putting into practice a papal decree, bishops at the Holy Thursday service in two Latin diocese churches in Thiruvananthapuram and Kochi, for the first time washed the feet of women as part of a ritual earlier performed only on males.   Christians on Thursday commemorated Holy Thursday — that recalls Jesus washing the feet of his 12 apostles before having the Last Supper.  The change in the 'feet washing' ritual on 'Maundy Thursday' is in line with a decree issued in January by Pope Francis, saying the rite should no longer be limited to men and boys, but also include women and young girls.  "The decision to extend the ritual to women and girls was taken after the church discussed it at various levels," a spokesperson of Latin Church's diocese told IANS.                        Archbishop M. Soosaipakiam washed the feet of six women, including two physically challenged women, and six men on Thursday evening at the St. Joseph's cathedral in the state capital, the spokesperson said. The Latin Church is in communion with the Roman Catholic Church headed by the Bishop of Rome, more popularly known as Pope.   Along with the Syro Malabar Church and the Syro Malankara Catholic Church, it accounts for Kerala's Catholics who make up about half of the 61.41 lakh Christians in the state.Washing of the feet is the most important ritual on Maundy Thursday.The change, Pope Francis had said, was "an attempt to improve the method of implementation, to express the full meaning of the gesture performed by Jesus at the Last Supper".

"Today (Thursday) this did not happen in our churches," Paul Thelekkat, a senior priest of the Syro Malabar Church, told IANS.The Syro Malankara Catholic Church also decided to keep the change in ritual in abeyance, pending discussions at all levels. Before becoming Pope, Francis, as a bishop, used to wash the feet of not only women but also non-Christians in the rituals in his home country Argentina, Thelekkat said.

"Now the Pope has made a change in the ritual. But as far as oriental Catholics (Syro Malabar Church and the Syro Malankara Catholic Church) are concerned, ritual changes are made not by the Pope, but by the synod of bishops of the particular church. I hope these two churches will look into it," said Thelekkat.  'Synod' refers to the governing body of a particular church. Non-Catholic churches in Kerala continue to hold the ritual, limited to only men and boys.