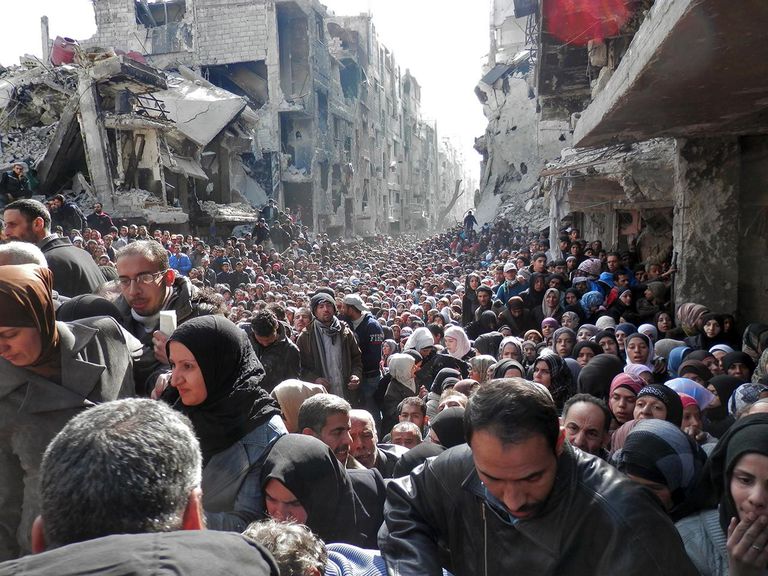 Fr Cedric Prakash SJ, is at present based in Lebanon, with the Jesuit Refugee Service (JRS) in the Middle East on advocacy and   communications.  There can be none better than Fr Cedric, a human rights activitist, who can enlighten CCV readers firsthand on the ground realities in Syria.  Isaac Gomes, Asso. Editor, Church Citizens' Voice.

“I am going to tell God everything!” were apparently the last words of a three-year old Syrian child before she died. These heart-rending words accompanied with a moving picture of a child has been doing the rounds of social media along with thousands of other messages, pictures, videos on the Syrian war. It is hardly possible to authenticate or verify such media. Nevertheless, the words and the picture of the child sums it all: the utter hopelessness and helplessness of a people who have been enveloped in a tragic bloody war which does not seem to end; for many, in the war-torn land of Syria “just to die” seems the only way out and then “to tell God everything!” On the face of it, this sounds rather cynical; but often when despair sets it, hope and resilience take a backseat!

February 2018 has been an extremely bad month for Syria and by all counts, the worst phase of the conflict, which began on 15 March 2011. The war until now was mainly concentrated in Homs, Aleppo Al Raqaa and some other areas. Damascus, the capital city, though subject to some intermittent attacks these past years, was regarded as a relatively safe and secure place. That reality, this past month, has changed dramatically with areas in and around Damascus subject to heavy artillery and aerial bombardments; besides, people from the besieged areas are apparently, as a last ditch effort also resorting to indiscriminate bombing in the densely populated areas of the old city. Bombing from the different warring factions has meant many fatalities, severe causalities and all round destruction. 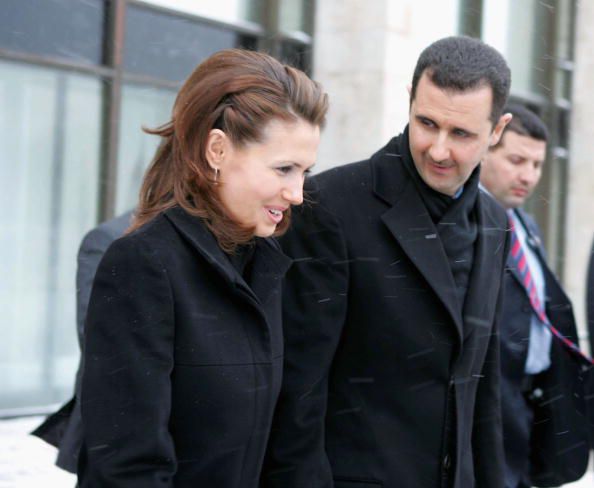 Today Damascus, once a thriving metropolis, wears the appearance of a ghost town. There is very little movement on the streets.  A large section of the people have left the city for safer and more secure places, in other parts of the country. Fear and a cloud of uncertainty has gripped everybody. In the early afternoon of 20 February Ms. Vivian Shaheen (who also volunteers with the Jesuit Refugee Service) was about to leave her workplace in a Government facility in the heart of Damascus. After days of experiencing frequent shelling in the Bab Tuoma area, Vivian had decided to take a break from Damascus and go to her family home in Maara, which is a safer location. She had just said “goodbye” to a close friend and colleague Ms. Lama Fallouh who was also headed home.  Suddenly from nowhere a bomb exploded; Vivian did not know what had hit her, just that she was bleeding profusely. She was able to run to a vehicle that had come to pick her up and was rushed to a nearby hospital. A shrapnel had pierced her right shoulder (fragmenting the bones there) and exiting from her upper arm. Her friend Lama was killed instantaneously by that bomb! The tragic everyday reality of a people who have to deal with not only the violence but also the pain and trauma in the sudden loss of a loved one.

On 22 February, the UN Emergency Relief Coordinator Mark Lowcock told the UN Security Council that it must act immediately “What we need is a sustained cessation of hostilities and we need it desperately Millions of battered and beleaguered children, women and men depend on meaningful action by this Council.” Mr. Lowcock went on to remind the Security Council that it had been briefed “in minute detail – month after month – on the scale of the suffering of the Syrian people, with endless reports on dead and injured children, women and men. Airstrikes, mortars, rockets, barrel bombs, cluster munitions, chemical weapons, thermite bombs, suicide bombs snipers, double-tap attacks on civilians and the essential infrastructure they depend on, including hospitals and school, rape, illegal detention, torture, child recruitment and sieges of entire cities reminiscent of medieval times” 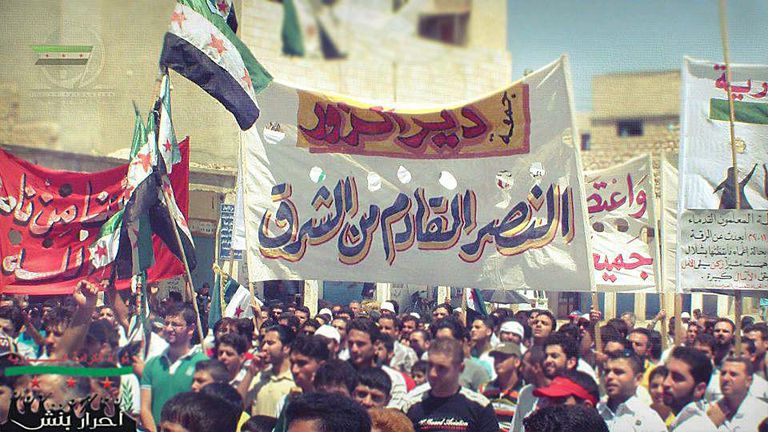 After weeks of terrible bloodshed, the UN Security Council finally decided and voted unanimously on 24 February for a thirty-day cease-fire in Syria and to allow humanitarian aid to reach people in the most affected areas. Bombardments however, continued and ceasefire violations were recorded in different areas, more than a week after the resolution. The UN Security Council is once again called to play a watchdog role. Speaking at the opening of the regular session of the UN Human Rights Council in Geneva on 26 February, the UN Secretary-General Antonio Guterres said that part of Syria was today “hell on earth” and “I remind all parties of their absolute obligation and international humanitarian and human rights law to protect civilians and civilian infrastructure at all times.”

The world community is aware that the Syrian conflict is very complex and not merely a ‘civil’ war; there are many other major stakeholders that have made Syria an international amphitheatre today. In the past month, the United States, Israel and Turkey have in turn bombarded military and civilian areas in Syria, on dubious and questionable grounds. The profiteering military-industrial complex needs to keep the region destabilized for its own selfish reasons. A good section of the media are so selective in their reporting and highlight just one side of the war. This is tragic indeed! It looks as though some of the so-called ‘big powers’ are really not serious about peace returning to Syria. At one stage, there was a modicum of hope, but now all that is destroyed with this latest round of violence – which is apparently the worst bout since the outbreak of hostilities in March 2011. The years of war have torn families apart; destroyed businesses and shattered livelihoods Filippo Grandi, the United Nations High Commissioner for Refugees said some time ago, “It is a collective failure. Ultimately, Syria’s conflict isn’t about numbers – it’s about people”

According to the latest statistics of the UN Refugee Agency (UNHCR), over 5.4 million people have fled Syria since 2011, seeking safety mainly in Lebanon, Turkey, and Jordan and beyond. There are at least 6.1 million more who are internally displaced inside Syria. Approximately 13.1 million people are in need in Syria of which 2.98 million still live in hard-to-reach and besieged areas. It is estimated that more than 3.5 million children under the age of seven, know nothing but war. Host communities are naturally under great strain as they shoulder the social, economic and political fallout. Hundreds of thousands have made perilous sea voyages seeking sanctuary; but no one is sure how many may have died at sea. While many have sought refuge in Europe, Canada and the United States, only a small percentage have actually been welcomed. The world is also painfully aware of the groundswell of xenophobia, racism, intolerance, exclusiveness and the stranglehold of right- wing politics in several countries across the globe.

Pope Francis has consistently been demanding “an immediate end to the inhuman violence in Syria” and asking the world community to pray for peace in Syria. In a recent interview, Fr Nawras Sammour SJ, the Regional Director of the Jesuit Refugee Service (MENA) says, “today Syria is in fact ‘many Syrias’ – that is a big tragedy. We were one country and one people! Unfortunately the last seven years has also witnessed the total fragmentation and division of Syria. We have become isolated, warring pockets- but for what? A question, which is very difficult to comprehend. So the restoration of our unity as one country is an important challenge for all the Syrian people”. The Jesuit Chaldean Bishop Antoine Audo of Aleppo voices a similar sentiment, “the only way to peace in Syria is a united and autonomous Syria. We should stop spreading hate, arms, violence and victims otherwise everything will continue to be at a dead-end!”

This bloody Syrian war has in these seven years witnessed the deaths of thousands and caused the largest displacement in recent human history. After these terrible years of experiencing widespread destruction and insecurity, there is a natural frustration and a sense of fatigue. Most Syrians are ready to clutch at any straw for normalcy, to fan any glimmer of hope, which may come their way. They yearn for peace and stability; they want their united Syria of the past to be restored to them. They desperately want the bombarding and the air strikes (which today take place with frightening regularity) to stop now; today they live in a state of total uncertainty, not knowing from where and when the next bomb will fall; like Vivian and her now dead friend Lama, they wonder whether they will live to see tomorrow!

At this moment fear, helplessness and hopelessness is the reality of many a Syrian today. The other day, as bombs rained in Damascus another friend of mine from there called saying, “I am trapped. What do I do? When will this war ever end?” There are obviously no clear answers and no words of comfort, which can ever change the grim reality, which people there have to face, day-in, and day-out.  It is indeed a bloody, violent and ugly war that needs to be stopped immediately. The powerful, vested interests of the world must get their act together and ensure that now! The rest of us mortals can only hope and pray and given one’s limitations, do all one can so that peace, security and normalcy returns to Syria and for her people today!

* (Fr Cedric Prakash SJ is a human rights activist. He is currently based in Lebanon, engaged with the Jesuit Refugee Service (JRS) in the Middle East on advocacy and   communications. Contact: cedricprakash@gmail.com).