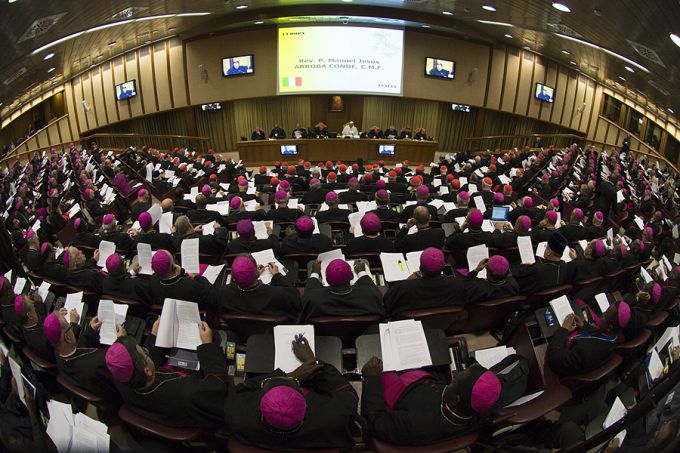 By Elise Harris. Vatican City, Oct 21, 2015 / 10:17 am (CNA/EWTN News).- Despite pastoral challenges posed by divorced-and-civilly-remarried Catholics, many synod fathers are in favor of current Church teaching and practice according to a new round of small group reports.

“The majority without full consensus affirmed the current teaching and practice of the Church regarding the participation in the Eucharist of those who are divorced and civilly remarried,” reads a new report from group “A” of the four English-speaking synod circles.

“We acknowledged that this pathway may be difficult, and pastors should accompany them with understanding, always ready to extend God’s mercy to them anew when they stand in need of it.”

The vast majority of the group's members affirmed the current pastoral practice regarding the reception of communion by divorced-and-civilly-remarried individuals.

Members also stressed that the decision as to whether or not persons in such circumstances should be allowed access to the sacrament “ought not to be left to individual episcopal conferences,” as has been suggested by some.

“To do so would risk harm to the unity of the Catholic Church, the understanding of her sacramental order, and the visible witness of the life of the faithful.”

Published Oct. 21, the prelates' observations came in the third set of small group reports released during this year's synod of bishops on the family. There are 13 languages groups, which include English, Spanish, Italian, French and German.

The strongest advocates of Church teaching and current pastoral practice were found among the Italian and English-speaking groups. Spanish-speaking groups were unclear, and the German group voiced support for change. Although the topic came up within the French-speaking groups, it was not a major point of discussion – rather than focus on access to communion, they touched on the Pope's revamped annulment process.

The gathering is divided into three parts, with each week dedicated to one of the three sections of the instrumentum. So far the bishops have spent the first two weeks discussing the document’s first section, “Listening to the challenges of the family, and the second, titled “Discernment of the family vocation.”

In the final week participants have turned to the third part, “The mission of the family today,” which has been the most widely discussed section so far.

In the report for the English speaking group  “C,” participants noted that there was general agreement among them that a “more effective pastoral accompaniment” was needed for divorced and civilly remarried persons.

However, the group said there was “little enthusiasm” when it came to the penitential path proposed by the meeting’s guiding document, called the “Instrumentum Laboris.”

When the group cast a vote on whether further study on the question would be possible in order to see if the Church could move in that direction, “the vote was evenly divided.”

In the end the group said they voted to replace paragraphs 122-125 of the Instrumentum Laboris “with an affirmation of the Church’s current discipline”   in terms of the reception of communion, and they recommended “the forms of participation mentioned in Familiaris Consortio, 84.”

Paragraph 84 of St. John Paul II's 1981 Apostolic Exhortation is dedicated entirely to the situation of divorced and remarried persons, and was mentioned by several of small groups as a text that ought to be have greater reference in the final report.

Group “D” of the English language circles relayed that they had “a long exchange” on pastoral approaches to divorced persons, whether civilly remarried without an annulment or not remarried.

Members expressed “significant concern” that no matter what is decided, it “should not lead to greater confusion among our people.”

It was noted that one bishop in the group said the topic of opening access for divorced and remarried persons without an annulment to the Eucharist was a matter of such serious doctrinal substance that “it could only be handled at an ecumenical council and not at a synod.”

Distinction was also made on the expressions used when referring to people in such difficult marital situations, with some synod fathers stressing the need to say these persons must “abstain” from receiving the Eucharist, rather than saying they are “excluded” from it.

The word “abstain,” they said, “is more accurate and not as negative.”

Group “D” emphasized that life in the Church can’t be reduced to just receiving communion, and cited catechumens – those preparing to enter the Church – as one example of the “huge segments” of faithful who throughout the history of the Church did not receive the sacrament,   yet were “clearly considered” full members.

A call was made within the group for a special commission that would study the issue of admittance to communion for the divorced and remarried “over a longer period of time with greater theological precision.”

A suggestion was also made for a more thorough study of the idea of spiritual communion – the desire to seek spiritual union with Christ in the Eucharist.

Likewise, the English speaking group “B” suggested that during the upcoming Jubilee for Mercy, a special commission be established to do an in-depth study of “the ways in which the disciplines of the Church which flow from the indissolubility of marriage apply to the situation of people in irregular unions.”

On the topic of spiritual communion, the group said noted that there are likely many situations in which people living in irregular unions and who are therefore living “in contradiction with the full meaning of the Eucharist” are not necessarily living in a continuous state of sin.

These people “may thereby rightly have a loving desire for Eucharistic union with Christ,” they said, observing that while “their objective state may prevent them from receiving the Body and Blood of Christ, they may properly develop the practice of Spiritual Communion, and thereby become more open to the saving grace of Jesus Christ and union in the Church.”

On the pastoral care of divorced and civilly remarried individuals, group “B” proposed a path of discernment and “reverential listening” that begins by listening to those in search of support.

“The first purpose of this attentive accompaniment would be to foster deeper discipleship with Christ based on the enduring bond of baptism, rather than addressing the question of admission to the sacraments of penance and Holy Communion,” they said.

Certain points involved in such a process, they explained, would include listening to the story of the first marriage and its possible invalidity, attending to the wounds caused by divorce to all individuals, taking into account the stability and responsibility of the second marriage and a focus on spiritual formation and growth.

A big discussion point for most groups was the topic of pastoral care for families with homosexual members as well as homosexual individuals themselves.

While some groups opted to remove any references to homosexuality from the final report, the “C” group said this solution “won little support” for them.

They asked that the section of the report dedicated to homosexuality be briefer, and that “a clear statement of Church teaching that same-sex unions are in no way equivalent to marriage.”

Other groups felt that the topic of pastoral care for persons with homosexual tendencies and their families deserved an entire synod meeting on its own.

Group “A” asked specifically that the synod “affirm and propose anew the entirety of Church teaching on love and chastity,” and encouraged parents and families to be confident in the teaching as they walk with each other “in responding to the Gospel’s call to chaste living.”

Many groups also addressed the topic of the gifts and challenges mixed marriages present, and stressed the need to have a more complete, comprehensive marriage preparation with couples playing a greater role in forming other couples.