Sword to my throat but I refused to convert 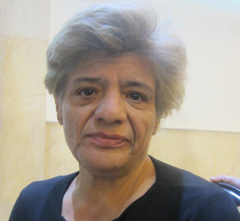 Iraqi Christian: ‘ISIS terrorist held a sword to my throat but I refused to convert’

Refugee told militant she would rather die than give up her Christian faith.

An Iraqi Christian woman described this week how she defied ISIS terrorists who put a sword to her throat and told her to either convert to Islam or lose her head.

With the blade at her neck, she replied that she would rather die than give up her Christian faith. But instead of decapitating her, the Islamists – many of whom she described as foreigners with long beards – robbed her of all her possessions before eventually driving her from Qaraqosh.

The woman, Khiria Al-Kas Isaac, 54, is one of a rising number of Christian refugees to escape over the border to Kurdish-controlled territory with tales of how they narrowly escaped with their lives after they refused to convert to Islam.

Weeping as she recounted her ordeal, Khiria said she and husband, Mufeed Wadee’ Tobiya, awoke on the morning of August 7 to find that Qaraqosh had been over-run by ISIS fighters.

She was told repeatedly by the militants, “who spoke different languages”, from the first day that if she did not convert to Islam she would be decapitated. When she ref- used, she and 46 women, who had also rejected such demands, were separated from their families and whipped and beaten over a 10-day period in an attempt to make them abandon their Christian faith.

Khiria said: “I answered [the terrorists] immediately, I was born Christian and if that leads me to death, I prefer to die a Christian.”

Quoting from the Gospel of St Matthew (10:33), she said: “Jesus said: ‘Whoever denies me before men, I will also deny him before my Father who is in heaven’.”

Khiria said that the women were often assembled as a group to be whipped so that they could witness how the others were suffering grievously.

She said that none of the women capitulated under the scourging and other cruelties inflicted upon them. “All of us were crying but refused to convert,” Khiria said.

She added that when an ISIS terrorist who was flogging her across her back told her he would “hurt you more” unless she became a Muslim, she answered him:

“I am an old lady [and] sick. I have not got any daughter or son that may increase the number of Muslims or follow you, what is the benefit if I will convert?”

On the 10th day all of the women were assembled together again and a terrorist “put the sword on my neck in front of all the ladies and said to me: ‘Convert or you will be killed.’”

Khiria answered: “I am happy to be a martyr.”

At that point the terrorists relented, and robbed her of all possessions, including money she had saved for a kidney operation, and drove close to Kurdish territory where she was released on September 4 along with her husband and two other women.

The following day 14 men and women were also expelled from Qaraqosh. It is not known what has happened to the remaining Christians.

Sahar Mansour, a refugee from Mosul who interviewed Khiria in Ankawa refugee camp near Irbil, said the woman was now unable to sleep because of nightmares about her experiences.

Meanwhile, US President Barack Obama has announced said he will not hesitate to take action against Islamic State (IS) militants in Syria as well as Iraq.

In a nationally televised speech outlining his strategy against IS, he said that any group that threatened America would “find no safe haven”.

He also announced that 475 US military personnel would be sent to Iraq but said they would not have a combat role.