Supreme Court’s supreme test: Institution that India Depends on must move quickly to heal its fissures 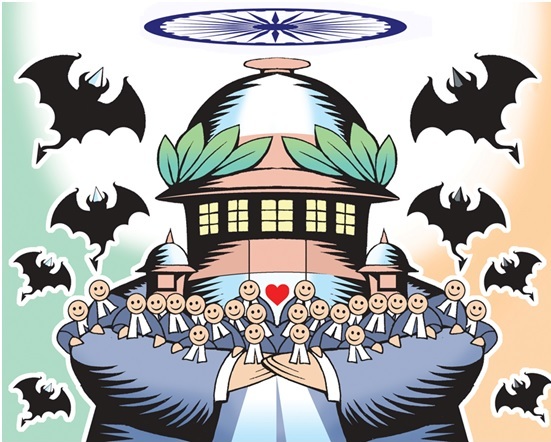 in Candid Corner – Times of India

(Note: For too long we have been hearing allegations about corruption among supreme court judges, some stressing they can pin point over 20 instances. The exploding press conference, a thing  unheard of till now, has only confirmed the legitimacy of this public fear.

Once bitten twice shy. The public will not easily believe that their fears were baseless. Even now the son the Murdered judge Loya, is reported to have said that he was under political pressure to declare he has no more complaints.

What remains to be cleared from public mind is the fear that the executive has been and still is interfering in the proper functioning of the judiciary, or not using it as a  caged bird or as the Master’s voice. james kottoor, editor ccv .

History alone will decide whether Friday, January 12 was the judiciary’s Black Friday, or an inner effulgence of institutional angst, pain and courageous reform.

The world’s most powerful court, the single entity in which the largest democratic population of planet earth has the maximum faith, has to move at supersonic speed to heal its fissures and repair its relationships. Because India cannot afford to see its shining star and ultimate bastion of a vibrant democracy, go up in flames.

For that, indubitably, the leader of the group, the CJI, has to take the lead. He has to reach out, embrace his colleagues, tell them to let bygones be bygones and suggest a protocol of a few simple rules which will obviate apprehensions already voiced, while precluding the slightest perception of lack of transparency or independence. The CJI, a learned man, has it in him to do so and all the others are fully capable of transcending differences for India’s good. The country is expectant. I am confident.

That a press conference is alien to the judiciary is an axiom and a no brainer. In normal circumstances, therefore, the criticism about holding it is fully justified, though the tone, tenor and content of some of such criticism was vituperative. Soli Sorabjee’s sober comments on this aspect contrasted with the Bar Council’s more strident words which, in turn, were overshadowed by the almost abusive and ridiculous call for impeachment of the four judges by a former senior Delhi high court judge!

These are four of our best (and seniormost) judges. Their decision for a presser must have been agonising and given them many sleepless nights. They are not known as persons of impetuosity or kneejerk reactions, nor are they publicity seeking souls. It requires a lot of institutional courage and unbearable pain to cross a Rubicon like this. Indeed, one of them, slated to be the next CJI, could have easily avoided the issue and taken the path of escapism, to avoid controversy. It requires a special kind of institutional commitment for such a person to stick his neck out.

The solidarity of four such persons, and their unanimity on the issues raised by them, is itself proof positive of the genuineness of these issues and reflects institutional collectivity, not individual ego or personal aggrandisement. Having exhausted all internal remedies including a Friday morning request to the CJI – except going to the President of India, a theoretical option which in reality would have achieved nothing except delay – they took the extreme press conference route.

Both matters mentioned in the letter impinged directly on the independence of the judiciary, a cardinal constitutional creed and an intrinsic part of its basic structure. Their dilution would be the beginning of the end of Indian democracy. No one knows the truth, but what is vital is the appearance and perception of less than even handed dispensation of justice, starting with “selective” listing before “preferred” benches, in high profile cases touching the interstices of the supreme corridors of power.

Some case names were mentioned, some not, but every practitioner knows that they included momentous matters like Aadhaar, Asthana, Loya and the memorandum of procedure for judicial appointments. If four seniormost Indian judges use such strong language in the letter, and further elaborate by referring to “democracy being imperilled” and grave fear about “selling their souls”, the country and CJI must take immediate note and remedial action.

The well-known saying “hard cases make bad law” arises qua the “master of the roster” principle. The principle is unexceptionable and must be reiterated and preserved for institutional efficiency. But whenever one starts putting excessive strain on a good principle, it snaps.

While the CJI has plenary and untrammelled authority to make rules as to which pre-designated benches can hear which pre-designated subject matters, the day is not far when, if recurrent allegations of inappropriate bench designation or arbitrary movement/ changes of cases amongst different benches persist, judgments will come on the judicial side that this amounts to arbitrariness and is unconstitutional. Thus “hard” cases and stretching a principle too far generate their own exception and their own demise.

No one can or should suggest that politicians or political parties intervene to settle the matter. The judicial family must – and i have no doubt will – settle it amongst themselves to fashion a new equilibrium. But when judges of such eminence and stature themselves put such issues in the public domain, can there be a gag order on all other stakeholders of democracy?

Merely because the ruling party (otherwise the most loquacious, oratorical and verbose on the most trivial issues) chooses to maintain ostrich-in-the-sand isolation and strategic silence, this cannot become the gold standard of correct behaviour for the country. Each one of us has a vital stake in Indian democracy and, for example, asking for a high level probe in a case like Loya can hardly be called “interference” in the judiciary.

The specific examples mentioned in the letter and elaborated by name in the presser, do not relate to bilateral private contractual disputes but interface with governmental facets of state action at the highest levels. The government must be in a minority of one if it thinks it is unconnected or alien to the substantive issues raised.

DISCLAIMER: Views expressed above are the author's own.