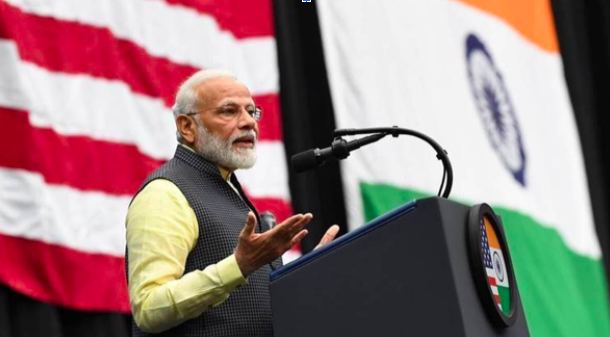 More recent data, post-2015, suggest that the trend of out-migration of Indian talent and wealth has accelerated.

While thousands of overseas Indians have cheered Prime Minister Modi at his rallies in New York, Houston, London, Dubai and Singapore, few among them seem to have bought into his “atmanirbharta” agenda.

It all started  with Motilal Nehru who sent his son Jawaharlal to Harrow school in Britain! “Birds of same feather flock together”, the rich with the Rich unlike the illiterate Jesus the Jew who came to enrich the downtrodden announcing “Good news to the poor!”

Quit India vs Embrace all!

Gandhiji liberated India with the slogan “Quit India”. India’s brightest, smartest and richest are quitting  India for greener pastures! Even the high flying raven cannot soar above the money-crze of humans!

Of course student migration has many justifying reasons. The fee charged by IB world schools can range from around Rs 75,000 per month to Rs 1,50,000. A counter argument is “brain drain” could help create a “brain bank” for India’s future development!

Only nonresident Indins, young or old should not be made to feel, they are not wanted in India. Getting double citizenship for them would be the first step. For this scribe nothing short of ‘world citizenhip’ can satisfy. Because we are all “sisters & brothers” only!

Even as the year ends with renewed calls from Prime Minister Narendra Modi for an Atmanirbhar Bharat, India’s best and brightest are busy making plans for emigration.

This newspaper reported this week the results of its investigation of the academic choices of school-leaving toppers (Indian Express, December 27-28-29) that showed more than half of the first rankers in Class 10 and Class 12 examinations (conducted by the Central Board of Secondary Education and the Council for Indian School Certificate Examinations) during the two decades of 1996-2015 had migrated and were studying or employed overseas, mostly in the US. The toppers are the tip of an iceberg of student migration.

More recent data, post-2015, suggest that the trend of out-migration of Indian talent and wealth has accelerated. Data collected by this writer from a couple of high-profile private schools in New Delhi show that while around the turn of the century about 20 per cent of their high school students went abroad for graduate studies, the number shot up to close to 50 per cent by 2010 and to 70 per cent in 2019. If the CBSE and ISC toppers are India’s brightest, many of the school-leavers from private schools like these belong to India’s wealthiest.

Apart from the CBSE and ISC students, there is now a growing number of International Baccalaureate (IB) students who, in fact, study and prepare only to be able to pursue higher education overseas. Since the 1980s, as many as 176 “world schools” have come up across India that offer IB certificates that help qualify Indian children for graduate education abroad. The fee charged by IB world schools can range from around Rs 75,000 per month to Rs 1,50,000 a month.

While the largest numbers still go to the United States of America, other popular destinations include Britain, Canada, Australia, New Zealand and Singapore. Dubai, closer home, has emerged as a major educational hub for Indian students. Other destinations include China, Russia, Taiwan, France, Germany, Kazakhstan, Kyrgyzstan, the Philippines and Malaysia.

As a consequence of the rising numbers of both the bright and the wealthy students going overseas for higher education, the annual total outward remittances under the Reserve Bank of India’s liberalised remittances scheme (LRS) for “studies abroad” has increased more than threefold, from US$ 1.54 billion in 2016-17 to US$ 4.99 billion in 2019-20. Total outward remittances under LRS have increased exponentially over the past five years, from US$1.3 billion in 2014-15 to US$ 18.75 in 2019-20. This “flight of financial capital” signals not just a “flight of human capital” but in fact a “secession of the successful”, as I argue in my forthcoming book on India’s power elite.

India’s wealthy have gone overseas for school and college education for a very long time. After all, even a leader of the national movement like Motilal Nehru sent his son Jawaharlal to Harrow school in Britain and many eminent Indians of the Raj were educated in the United Kingdom. Even after Independence, overseas education has had its attractions for those who could afford it, or those who were fortunate to win scholarships. With time, the US became the single most important destination. However, all of this constituted a trickle compared to the rising flood of out-migration from both the middle and the upper classes.

The Indian Express report shows that an overwhelming number of the CBSE and ISC toppers going overseas have a non-metropolitan background. It is one thing for such children, from modest social and economic backgrounds and with excellent academic credentials, to seek educational opportunities overseas; it is quite another when wealthy families from big cities send their children to schools that in fact equip them for further studies and life overseas. The former may represent “aspirational India”, but the latter constitutes the “secession of the successful”.

Economists are able to quantify the flight of finance capital, but there are no reliable estimates of the flight of human capital. In an early recognition of the problem of “brain drain” for developing economies, trade economist Jagdish Bhagwati proposed, way back in the 1970s, the imposition of a brain drain tax. Despite the very small numbers of the emigrating talent in the 1970s, the social class they represented managed to nix the Bhagwati proposal. Today, given the much larger numbers and the social and economic diversity of the emigrating millions, no political party is likely to have the courage to introduce such a tax.

Both Prime Minister Manmohan Singh and Prime Minister Modi have invested hope by suggesting that out-migration does not necessarily constitute a “brain drain”, but could help create a “brain bank” on which India can draw for its own development. However, the data suggests that an increasing number of non-resident Indians (NRIs) have become “not-returning” Indians, and are contributing more to their host countries than to their home country.

For a majority of them, opportunities for work and the quality of life overseas, especially in English-speaking nations, have an obvious attraction. However, there is now an emerging category of Indians migrating out and opting to stay out of India because they feel their motherland no longer wants them. This sense of alienation, especially among minorities, is a disturbing trend.

An equally worrying trend is the increasing number of India’s super rich who have chosen to live abroad and work from abroad. Indian laws permit an annual outward remittance of up to US$2,50,000. The law also permits business persons to function from overseas as non-resident entities. The next generation of top Indian business families is increasingly opting for this dual status of owning and managing business in India while living overseas.

While thousands of overseas Indians have cheered Prime Minister Modi at his rallies in New York, Houston, London, Dubai and Singapore, few among them seem to have bought into his “atmanirbharta” agenda. They are quite willing to cheer Modi’s plans for India’s atmanirbharta, but prefer to invest in their own atmanirbharta overseas. (The writer is former Media Advisor to Prime Minister of India).