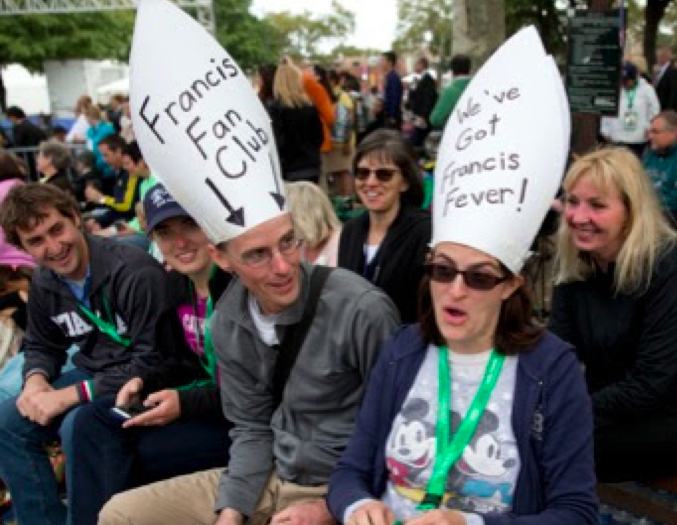 A Call to Terminate Papal Trips
A noisy, expensive counterfeit of Papal Duty
By John Vennari a lawyer of International
repute, who takes up cases at the Roman Rota

(Note: No harm listening, even to the most violent of our critics. Even Jesus had his critics. When Mary

anointed his feet with fragrant ointment, Judas asked “Why waste so much money on ointment, instead of spending it to help the poor.” And Pope Francis is the person, who encourages his bishops not to be afraid of speaking their mind for fear of offending his sensibilities. After all aren’t we telling our own PM Modi to stay at home to put his house(country) in order instead of being a glob trotting PM?
Since the writer raises ever so many questions, some of them very relevant, I suggest to our readers to react with equal openness and express their views fearlessly. In any case what are the Popes supposed to do? Sit on the high throne in Rome and safeguard the deposit of what has been handed down as “Truth” or just imitate the life of Jesus and spread what he taught by mouth. He is not reported to have written a single word, though he was and is called the WORD made flesh. He didn’t even have a home address. He was always trudging the dusty roads of Palestine all through the three years of his public life, as Francis was doing in the Slums in Kenya and CAR. The only vehicle Jesus used was an ASS. His Nazareth manifesto: “The Spirit has anointed me to preach the gospel to the poor etc,” tells it all. Jesus did not go about pontificating. He walked a lot and talked a lot. This is something most of the popes didn’t do. But Francis is doing or overdoing it. I even used to feel very sorry for the poor man of 78 with one lung doing that much physical exertion without a word of complaint. His example of humility and tireless service to the sick, exploited and marginalized is unparalleled. So please speak up. None of you have to agree with what I said. In the service of truth and one’s own conviction, please let us hear you. This piece was forwarded to us by our friend John Menezes, james kottoor, editor) In 1761, speaking of the primary duty of the Pope, Clement XIII wrote, “In the Lord’s field, for the tending of which Divine Providence placed us as overseer, there is nothing which demands as much vigilant care and unremitting labor in its cultivation than guarding the good seed of Catholic teaching which the Apostles received from Jesus Christ and handed on to Us. If in laziness this is neglected, the enemy of the human race will sow weeds while the workers sleep.”[1]

Likewise Pope St. Pius X, the greatest Pope of modern times, noted that one of the “primary obligations assigned by Christ” to the papal office was “that of guarding with greatest vigilance the deposit of Faith delivered to the Saints, rejecting the profane novelties of words and the gainsay of knowledge false so-called.” Pius explained that in the face of error and heresy (in his case, in the face of Modernism), “We may no longer keep silence, lest we should seem to fail in our most sacred duty.”[2]

To repeat: the primary duty of the Pope is to “guard with greatest vigilance the deposit of the Faith” and “there is nothing which demands as much vigilant care and unremitting labor” to maintain the purity of Catholic teaching. Not to do so means the Pope would “fail in his most sacred duty,” and as a result of this neglect, “the enemy of the human race sows weeds while the workers sleep.”Or in our case, while the Pontiffs travel.

Papal trips are a noisy, expensive counterfeit of Papal duty – a frenetic sentimentalism disguised as genuine vitality. This high-energy neurosis is now of 50-year duration, the same period of the collapse of the Faith in every country on earth. Worldwide globetrotting may give the appearance of authentic papal action, but the results are useless at best, scandalous at worst. Meanwhile, the abysmal ignorance of the Catholic Faith amongst clergy and laity continues to worsen.

I propose we end the charade and bring the papal trips to a grinding halt – now. What is needed, and we say this with respect, is not endless travel, but a return to sound doctrine and genuine discipline, according to the model of St. Pius X. This great Pope not only issued clear correction to the errors of his day, but enacted effectively disciplinary measures against priests and teachers infected with Modernism. His Pontificate was that of vigilance, vigilance and ever-more vigilance against heresy and in advancing Catholic Truth. Pius X stayed in Rome and did his job.

The faith worldwide is in collapse. Later we will look at the results of the recent Vatican Synod questionnaire, wherein the vast majority of Catholic Faithful worldwide either reject, or do not understand, rudimentary moral teaching.
Miles and Miles
As for papal trips we can ask some basic questions: such as, how many have there been? What good have they done?We can also raise the question of cost, which is colossal.

• Paul VI, between 1962 and 1970, embarked on nine papal journeys. Keep in mind a “Papal trip” – or “Apostolic Journey” – depending on the way it is listed, can mean either visiting a single country, or visiting a collection of countries. For example, Paul VI’s ninth (and final) 1970 Apostolic Journey included visits to Iran, Pakistan, a stopover in Dacca, Philippines American Samoa, a stopover in Pago Pago, Samoa Australia, Indonesia Hong Kong and Ceylon.

• John Paul II, who presently holds the record, set out on 104 trips – again, each of these jaunts can include visits to numerous countries. His 42nd “Apostolic Journey,” for example, of June, 1989, comprised visits to Norway Iceland Finland, Denmark and Sweden.

• Pope Benedict XVI traveled to 25 countries during his eight-year reign.
• Pope Francis, so far, conducted 11 trips, a number of which include a visit to more than one country. The most recent completed, listed as his 10th Apostolic Journey, comprised visits to Cuba and the United States (As of this posting, he is now visiting Kenya)

After 50 years of papal trips, the chaotic condition of the Church and the confusion of the faithful have never been greater. Heresy, error and confusion abound. Priests, Catholic university professors, theologians and bishop by the thousands pervert the faith and poison the faithful, while today’s Popes effectively ignore the problem, and stand before government bodies prattling on about environmental awareness and the abolition of the death penalty.

The post-conciliar popes effectively substituted their primary duty to safeguard the faith against error with the Conciliar novelty of smiling dialogue and fevered activity. This concept of the Papacy would be foreign to Popes Pius XII, Pius XI, Benedict XV, Pius X, Leo XIII, Pius IX and all the Popes back to Peter himself.

You can have all the papal travels you want; all the screaming crowds, all the tears and emotions, all the high-energy rock’n’pop liturgies. None of it really matters. It’s a façade. It’s shallow enthusiasm. There is no substitute for the Pope fulfilling his primary role, which is to safeguard the purity of the faith, maintain the integrity of Catholic morals, and discipline those Catholics – be they priests, bishops or civic leaders – who cause scandal by heterodox teaching and bad example.

In fact, during the height of the clerical scandals in 2002, Bishop Fabian Bruskewitz of Lincoln, Nebraska, said at press conference in Dallas that he has no idea why Pope John Paul II has given the Church so may “lousy bishops.” Bruskewitz went on to cite “a letter that St. Bernard of Clairvaux wrote to the Pope of his day, warning the Pontiff that if he [the Pope] was going to be sent to Hell, it would be because he failed to get rid of bad Bishops.” Bruskewitz said with a mischievous smile, “I did pass that letter on to the current pope.”[3]

Then there is the question of the hefty price tag for these flash in the pan events. In Philadelphia alone, Pope Francis’ visit cost the city $12 million, “which include $4.9 million for police and traffic and crowd control, security and emergency response; $3.9 million for the fire department and emergency medical service; nearly $850,000 for the city’s streets department, and almost $890,000 for the city’s office emergency management.”[4]

Remember, I noted that Pope Francis’ US Apostolic Journey marks the 148th Papal Trip. If each trip costs the cities anywhere near the $12 million Francis’ visit cost Philadelphia … well, do the math, and consider if these excursions are worth millions and millions poured into them (not to mention that massive carbon footprint to be considered by the environmentally sensitive). I think it fair to designate these papal extravaganzas as a “culture of waste”.
Faith in Shambles
The post-Conciliar neglect of papal duty is manifest in the results of the recent questionnaire sent out to Catholic Faithful by Francis’ Vatican in preparation for the Synod. The outcome of the questionnaire is no surprise to the informed Catholic. It is at least a statistical measure of the depths to which we have fallen….
Other topics covered in article:
• The Synod questionnaire and absystmal ignorance
• John Paul II and the "development of Conciliar attitudes"
• "Talks much, says little" – and no mention of Jesus Christ to secular audiences
• What if Pope Leo XIII addresssed US Congress?for rest of article, go to:
http://www.cfnews.org/page88/files/159491c4f3e6d3f30bec2420acdcd922-498.html
++++++++++++++++++++