Stop mixing freedom to marry with all freedoms! Love jihad is nonsense! 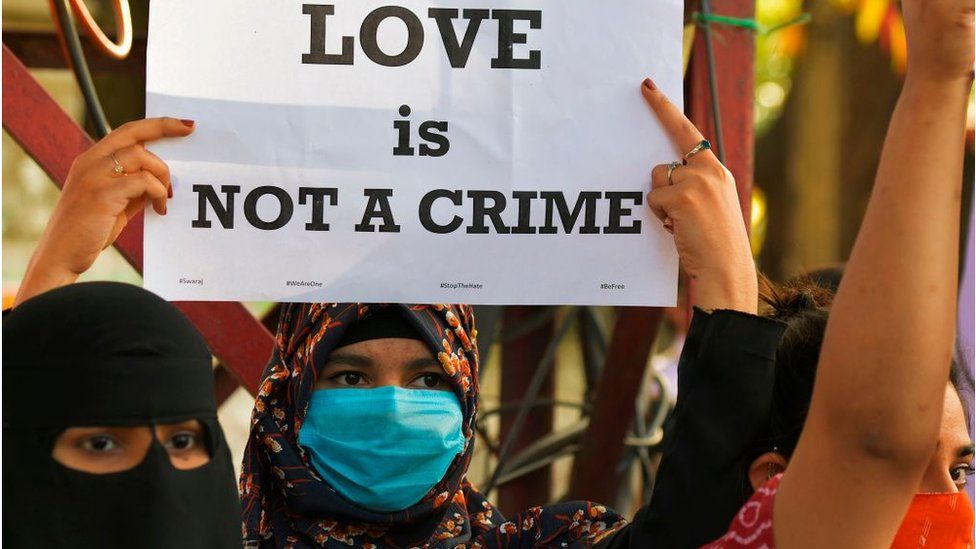 The idea that there is a widespread Muslim conspiracy to prey on innocent Hindu girls and convert them to Islam is ludicrous.

Freedom of CHOICE of a human, male/female, is universal;  it extends to millions of choices an individual has. Freedom to marry whom, is just one of these millions. How can it be reduced to or clubbed up with  an individual’s all other freedoms? It would be like trying to fit a square peg in a round hole of enormous size?

This is the anomaly, biggest conflict  in UP’s Love Jihad. It doesn’t need a Solomon to grasp it, even an illiterate can. But how can you or me make the UP CM see it? You can wake up only one asleep, not one pretending, or intoxicated with insanity.

Hatred for other religions?

His whole obsession is hatred againt any Hindu changing over to any other religion. Dr, Balasaheb Ambedkar converted to Buddism together with around 3,35,000 on 14th October 1956. If Yogi Adityanath were alive then, he would not have allowed it. In today’s Times of India there is an article, he would “have faced jail”.

This is the crazy times we are living in with “Subka sath subka Vikas” of Modi and Yogi. In fact what is best for India is to wipe out Caste curse in India, like Race curse in US, is inter-caste and inter-religious marriages. Let those who have ears to hear! james kottoor editor ccv.

There is only one way to say this. Bluntly. The real victims of the attempt by BJP chief ministers to give legal weight to the insane idea of ‘love jihad’ are Indian women. All Indian women of every caste and creed technically have the fundamental right to choose whom they marry.

But for decades after India became a modern republic, this basic right was denied to young girls by parents of primitive mindset. In recent times, things have changed, especially in small towns and big cities. Girls have taken to choosing their own husbands instead of being forced into arranged marriages. This is good. It indicates that women are now aware enough not to be treated as chattel.

So, when women choose to marry outside their caste or religion, it is not `Love Jihad' but a choice.  Why then are BJP governments going out of their way to pass laws that seek to push women back into medieval times? As always in matters of fanatical Hindutva, it is Yogi Adityanath who leads the way. This powerful monk is so worried about Hindu women being whisked off by ‘predatory’ Muslim men that he passed an ordinance recently that disallows inter-faith marriages unless officialdom is given two months advance notice. This means that the government of Uttar Pradesh can interfere in that most personal decision that a woman makes: choosing the man she wishes to marry.

A recent victim of this new law is Pinki, 22, of Moradabad. She married a Muslim before Yogi’s ordinance came into effect and when it did, the couple decided to register their marriage to avoid future complications. The registration attracted the attention of Yogi’s Hindutva hoodlums who police ‘love jihad.’ They ensured that Pinki’s husband and his brother were arrested, and that she was locked up in a Nari Niketan for ten days.

She claims that while there, she was tortured and put under such stress that she had a miscarriage. Doctors who examined her when she was taken to hospital admit that an ultrasound examination failed to detect a heartbeat. When local policemen were asked why she had been treated in a way that caused her trauma, the response was that she should have told them she was pregnant. How many young women will have to endure what Pinki did before we realise that this awful law deprives women of their privacy and their right to marry who they want?

This should be the feminist issue of the moment but for some reason, there has been hardly a squeak out of those who generally make a racket about women’s rights. Personally, I have never been drawn to women’s causes. This is because I was at an impressionable age when women were burning their bras in America and was put off when a small group of silly Indian women faithfully followed suit.

Two years ago, privileged Indian women did something similarly imitative when they copied the MeToo movement and started naming and shaming movie stars, ministers and celebrity writers. I got into trouble with them because I said that their efforts were too imitative to make a difference to women who are truly voiceless.

Where are these feminists today when there is a chance to take up a uniquely Indian and very dangerous assault on the rights of Indian women? Yogi Adityanath’s efforts to deprive women of the right to choose their own husbands are being copied by other BJP chief ministers. So how long will it be before women are dragged back into a time when women had no right over their bodies or their choices?  How long before women are told that they have no right to do anything more than breed children, cook and clean? The RSS chief made his own views clear when he declared that the secret of a happy marriage was for men to go out and work and for women to stay at home and look after the family.

The problem with the men who lead the Hindutva movement in Modi’s ‘new India’ is that their minds seem pickled in a mythical past which they believe was glorious and unpolluted by marauding Muslim men. Ironically, their idea of Hinduism is more Islamic than Hindu.

In the seventies, when Pakistanis first started coming to India to play cricket and talk of peace, I remember that it was the women who were truly dazzled by the freedom Indian women enjoyed. They were fascinated that Indian women could work in jobs that in their country only men did and delighted that they could dress the way they wanted and live life on their own terms. Pakistani men thought this was a bad thing and blamed it on evil western influence. I remember being shocked to hear this from men who were themselves educated in western universities.

What worries me today is that we seem in India to be regressing into a Hindu version of Pakistan. What worries me more is that laws are being passed that specifically target women’s rights and that our usually vocal feminists are mysteriously silent. Not only should Indian women have the right to choose their own husbands they should have the right to decide if they want to change their faith. The idea that there is a widespread Muslim conspiracy to prey on innocent Hindu girls and convert them to Islam is ludicrous. So is ‘love jihad.