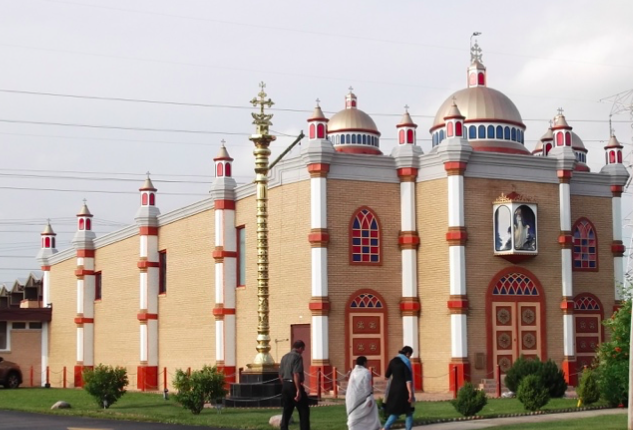 This is the last ditch effort the Knanaya community in USA is doing to put an end to the practice of purity-of-blood (Endogamous) marriages enforced in Knanaya Parishes under the Syro Malabar Catholic Diocese of Chicago in USA and in the Archdiocese of Kottayam(Knanaya) diocese in India.
Well-meaning people in Kottayam diocese and Knanaya community all over the world have been conducting an organized, sincere, systematic campaign both in India and USA to settle this shameful unchristian, racist practice amicably for many years, especially since 2013 when they conducted an all American Knanaya Seminar on July 3rd at the Chicago Cathedral hall with leading speakers dr. james kottoor, editor-journalist from Kerala and Sri Chacko Kalarical, expert in Syro-Malabar principles and practices from Detroit.
Ever since appeals, organized letters and memorandums were repeatedly send like a rising tsunami to responsible bishops in leadership positions both in US and India and even to Pope in Rome through proper channels. In addition this scribe himself has written so many articles, too many to name here, in India and US papers and in various independent internationals like Church Citizens’ Voice(CCV).

The shocking fact is that the responsible bishops have not responded to these prayerful, desperate appeals to this day and age even when the church wax eloquent on dialogue, vertical and horizontal. For many church watchers their adamantly disturbing silence speaks eloquently of the kind of their commitment to the principle of transparency Jesus lived and taught: (Palam locutus sum) I have spoken all things in public, not in secrecy or through silence.
What is given below is a Letter sent by the President of Knanaya Association of North America (KANA) stationed in New York, leading the campaign against Emdogamy and requesting for immediate publication. James kottoor, editor, CCV.

How can Catholic Church approve a policy like the one practiced by Knanaya Catholic community in Barack Obama’s America?

How can Catholic Church approve a policy of exclusion for race/blood purity in the Church redeemed by the blood of Jesus Christ?

How can the bishops approve a policy splitting the family against the divine commandment: “What God has joined together, let no man separate?”

Attached please find a copy of the letter we have given to Apostolic Nuncio to handover to Pope Francis.

Holy Father, we need your help, our families and children are hurting. We are being hurt by the race obsessed practices in Kottayam Archdiocese in Kerala, India and Syro-Malabar Diocese in Chicago, USA. Your direct intervention is appreciated since other hierarchical authorities find it difficult or unable to end this practice.

Practice in Kottayam Archdiocese Archdiocese of Kottayam is a diocese established in 1911 for Southists (Knanaites). Knanaya people are descendants of a group of Christians who migrated to Kerala, India from Middle-East in A.D. 345. Based on an alleged custom and tradition, the practice of the Kottayam archdiocese is that if a member enters into a marriage with another catholic (non-endogamous marriage), the member is asked to leave the eparchy of Kottayam. The member is compelled to join another catholic diocese along with his/her spouse. Their biological children and adopted children of Knanaya parents will not be allowed to be members of the Knanaya diocese.

This is being practiced to protect presumed racial/blood purity of the Knanaya community. As a result of this practice, many young men and women in the community remain unmarried for fear of the ignominy of getting married to a non Knanaya Catholic and getting expelled from the community. This unchristian and uncivil practice inflicts psychological and emotional wounds on our families and children. This diocese does not evangelize and bring people from outside into the Christian fold.

Practice in Chicago Syro-Malabar Diocese For resolving a dispute regarding membership among Knanaya Catholics who migrated to USA from Kottayam, the Congregation for Eastern Churches then under Cardinal Lourdusamy issued Rescript Prot. N. 124/83 dated January 30, 1986 (the “1986 Rescript”) indicating that “the Congregation does not accept the customary practice followed in Kerala of excluding from the community those who marry non-Knanaya spouses, is extendible to the United States of America”. As such, Knanaya Catholic missions established in the USA were directed to include all Knanaites without regard to their non-endogamous marriage status. Though they initially agreed to it, it was scuttled by the effort of the Kottayam bishop.

When the Chicago Syro-Malabar diocese was established in 2001, Bishop Mar Jacob Angadiath was instructed by the Congregation through Rescript Prot. No. 85 dated 10-21-2001 that “the Holy See continues to follow the directives outlined in the 1986 Rescript” with regard to Knanaya churches in the Chicago Syro-Malabar diocese. After many years, by the circular of December 20, 2012 Bishop Mar Jacob Angadiath complied with the 1986 Rescript.

However, Knanaya bishops and clergy refused to implement the directives outlined in the Rescript, though they pretended to implement it. Although several appeals were filed by Kottayam bishops to revoke the 1986 Rescript, they were rejected by the Congregation after being reviewed by Cardinals