Stooping to Conquer or Lording it over? Centre’s Biggest Challenge yet! 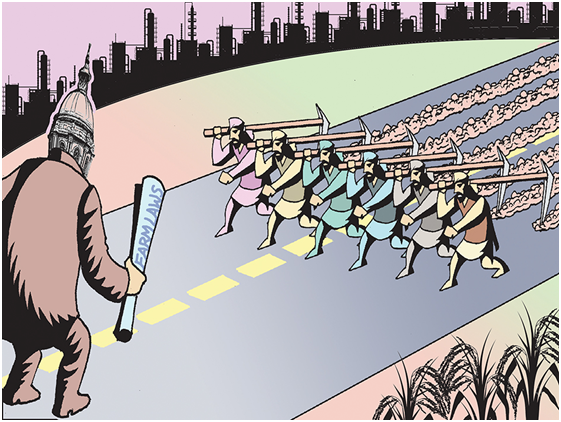 When two cowards meet in combat who will win? One who deals the FIRST BLOW; then the other will run – thinking with his feet — for his life. But what happens when two enlightents meet in a battle of wits? The wiser will stoop to conquer!

Where can you find him? Not among the ‘Climbers’ called also the ‘Alpiners’ elbowing for the front or top place, but among the ‘back-seaters’, the Cattle class. I found him. He was the most illiterate, never crossed even the portals of an LKG, never wrote a single word on paper, but tops  in the hearts and minds of humans all over!

Added injury to insult he was called a bastard, son of a bitch, a rebel from the age of 12, may be revolting to public rebuke, untraceable for 18 years, suddenly appeared at a wine party with his fishing coworkers for a living.

Ever since he kept the company of the cattle class, caring for those in need most to become the talk of the county side, tows and beyond! At a party he put up for friends he washed their feet to teach leadership is serving, ‘stooping to conquer without that intention’, which automatically makes, the last, the humble the FIRST!

He was not particularly religious, went to temple only twice reportedly, first to discuss with the so-called teachers, second to drive them out for making the house of prayer into a den of thieves, told the holy priestly class that drunkards and prostitutes will enter heaven before them; he was no sinner, none could accuse him of sin!  He was a historical person like Socrates, poisoned to death, he more painfully on the cross!

Yes he was the ideal son of man, as he described himself, though many think of him as Son of God, which I too did for long. But study and research reveals he was son of Tiberius Julius Abdes Panthare, a Roman soldier posted in Nazareth. So I have to stick to it for being honest, until something disproves it.

So this Son of Man is the Ideal  top human for me and for millions for teaching the art of ‘Stooping to Conquer’ mores precisely ‘Serving to Rule’ without the least semblance of ruling or lording it over! Is it ever possible to teach such lessons to persons like, Pinarayi, Modi and Trump?  james kottoor, editor ccv.

Farmer protests represent a turning point for the government, irrespective of outcome.

The crisis in Indian farming, due to the increasingly fragmented land holdings and rising population pressure on land, which in turn is due to a lack of decent non-agricultural jobs, has been long in coming.

The present farmer protests at the outskirts of Delhi are a turning point for the Modi government, irrespective of the resolution of this crisis. If the government gives in to the farmers it opens itself to further pressure from farmers, labour unions and PSU employees, its reform process gets put on the back burner and most important of all, its prestige suffers a body blow.

If it were to stand resolute it provokes a prolonged standoff against swelling numbers of farmers which could result in a slow erosion of its authority. Moreover, it could provide others who were hitherto silent with simmering discontent an opening, especially to those who have suffered previously due to the lockdowns, demonetisation and GST blunders.

Crucially, the political right unlike centrist forces across the world associates resoluteness with respect. In this lies Prime Minister Narendra Modi’s appeal even to his base, where retreat is associated with weakness and disdain. Thus the present crisis strikes at a core appeal of the government. This leaves no easy options for the government and will be a true test of its political skill.

Analysts and commentators, as much as the government’s supporters, who are parsing the costs and benefits of the new farm laws and of the MSP regime are misreading the mood of the farmers. To anyone who has heard them, it’s quickly apparent that they are not looking for modifications of these new laws but a complete scrapping and more critically they want a codification of the MSP regime in law. The latter demand is so onerous that no government has ever done it, even today no more than a small fraction of only 23 crops is procured by the government and MSP does not have legal status.

Unlike the CAA protests of the previous winter which were mainly confined to Muslims, an isolated and reviled minority which the government ignored, then labelled as seditious and finally suppressed with firings, deaths and arrests, these farmer protests don’t offer the same playbook. The government for the first two months tried to ignore the protests, then physically tried to stop their march to Delhi, its spokesmen even labelling the Sikh farmers who lead the protests as terrorists.

But since Sikhs are not friendless, are better off than Muslims and because farmers constitute 50% of the country, with some Hindu farmers from other states, a core constituency of BJP, joining in or expressing sympathy, the government has been forced to negotiate. It’s therefore likely that government will strike a compromise, after it has tired the farmers a bit, divided their unions and possibly turned public sentiment in Delhi against them, especially if the farmers were to tighten their blockade.

While there are several reasons for this confrontation, at its root this is a crisis of trust and a violation of the social contract. As the historian EP Thompson noted about the bread riots in 18th century England, it was not scarcity alone that caused them, for suffering folk had shown patience even in the face of natural calamities. Actually the poor rioted when widely held norms of justice and fair price had been violated.

While the lack of manufacturing growth is not unique to this government, it has an exceptional record in making false promises and favouring big business which finances its massive election spending.

In 2016 Modi promised to double farmer incomes by 2022, which would have required a growth of 13% per annum. Actual growth has been between 1-3% per annum, while most schemes for domestic manufacturing, skilling, startups, irrigation and urban renewal have been duds. The economy even before the pandemic had officially slowed to 3% – or possibly 0.5% as per the government’s own former chief economic adviser – due to impulsive policies of demonetisation and hasty GST implementation.

To this has been added an ill thought out lockdown resulting in an economic contraction of 23.9% in the April-June quarter, causing India’s per capita income to fall below Bangladesh’s. All of this has deeply affected the unorganised or informal sector, which includes the rural economy.

The concentration of big capital and its quid pro quo with the government has been described by Pratap Bhanu Mehta as structural corruption overshadowing transactional corruption. Indians have been watching as some of India’s richest billionaires enhance their fortunes. Protesting farmers also point out that the bill was rammed through both houses of Parliament during the pandemic against a weakened opposition and without consultation with the states or other stakeholders, arousing their suspicions. Truth has fused with speculation due to the high handedness of the government.

The states of Punjab and Haryana have the best infrastructure for government purchase of crops and depend heavily on it, hence they risk the most with a change of arrangements and possible reduction of MSP. Moreover, they had been the largest beneficiaries of the green revolution and government purchase policy since the 1970s, but are now stagnating with 22% youth unemployment in Punjab. All of this has compelled them to repeat what has been a recurrent pattern in world history: Of protests and revolutions being led by people who have seen better days, rather than the most marginalised.

(The writer is Associate Professor and the head of the Center for a New South Asia, Jindal School of International Affairs, OP Jindal Global University).