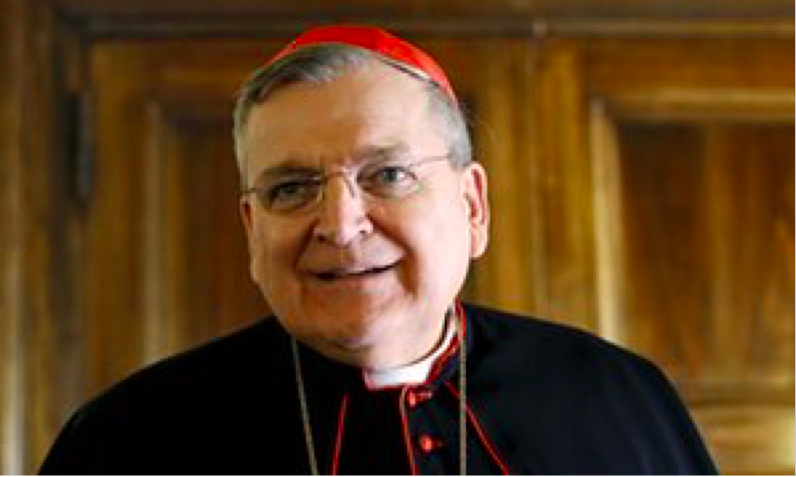 (In the pic: US cardinal Raymond Burke)

Pope Francis’s harshest critics are aligning themselves with Trump and his acolytes around the world, including Matteo Salvini

(Cardinal Burke, the unofficial head of the most conservative elements within the Catholic church, praised Trump after his election. Photograph: Alessandro Bianchi/Reuters)

(Note: By now it is a known fact that Poor Pope Francis is pitted to wage war against two concervative  battalions. Leading the clerical army is Cardinal Raymond Burke of the US’ Trump and  the National Catholic Register, a conservative Catholic publication.

In Italy at the head of the conservative lay political group is Matteo Salvini the right wing Italian nationalist with whom Cardinal Burk was reported to have had one and a half hour meeting. When a conservative US cardinal meets an Italian conservative political leader (a religio political secret meeting) in Italy what unkind of message is sent out for public consumption?

In the meantime Francis had already  divested Burke of all his connection as envoy to  Knights of Malta another conservative group giving headaches to Francis. For that reason quite recently its grand master Knight Matthew Festing  also was forced to resign and go.

While Burke and Trump are for exclusion in US against immigrants,  Cardinal Joseph Tobin of Newark and Pope Francis are  strong defenders of inclusion and immigration. So now it is an open fight between the forces of globalization and localization both in Church and in politics. Let better light descend on them to settle their differences peacefully. james kottoor, editor)

A  powerful American cardinal who is engaged in a bitter feud with Pope Francis has met Matteo Salvini, the rightwing Italian nationalist who is a staunch supporter of Donald Trump and has praised Benito Mussolini.

The reported meeting between Cardinal Raymond Burke and Salvini, the head of the Northern League party, is a sign that intense divisions between traditionalists and the pope are becoming increasingly political.

Pope Francis’s allies in the church, who back his message of inclusion and support for immigrants, are speaking out against the US president’s travel ban against refugees and immigrants from majority-Muslim countries. Cardinal Joseph Tobin of Newark, New Jersey, who was recently promoted by Francis, called Trump’s executive order “the opposite of what it means to be an American.” Tobin has also suggested that Trump is a conman.A fearful nation talks about building walls and is vulnerable to con men. We must challenge the fear before we are led into darkness.

At the same time, Francis’s harshest critics appear to be aligning themselves with the new Republican president and his acolytes around the world, including Salvini.

Burke, who is one of four cardinals who signed an open letter to Francis last year questioning new guidance allowing priests to decide whether divorced and remarried believers should be able to receive communion, praised Trump after his election in November. He said the surprise victory represented a clear win for pro-life causes and said the US president tended to surround himself with “very sound advisers”.

“I don’t think the new president will be inspired by hatred in his treatment of the issue of immigration,” Burke told the National Catholic Register, a conservative Catholic publication, at the time. He added: “Charity is always intelligent; it demands to know: Exactly who are these immigrants? Are they really refugees, and what communities can sustain them?”

During the 2016 election, Francis criticised Trump’s call for a border wall between the US and Mexico, saying any person who supported such policies “is not Christian”.The meeting between Burke and Salvini reportedly took place last Thursday in Burke’s home in the Vatican and lasted for an hour and a half, according to a report by Francesco Grana, a Vatican journalist.

A spokeswoman for Salvini declined to comment about whether the meeting took place. But she confirmed that Salvini was at the Vatican at the time. A spokesman for the pope did not respond to a request for comment.It is highly unusual for a senior American cleric to meet with the head of an Italian political party.

Salvini has openly shown contempt for Pope Francis when the pope has spoken of the need for Italy and countries around the world to take in hundreds of thousands of refugees and migrants who are escaping war and poverty.

In 2015, when Francis said countries that “close the door” to refugees seeking a safe haven in Europe ought to ask God’s forgiveness, Salvini shot back in a radio programme that he did not need God’s forgiveness. He has also accused the pope of doing a disservice to Catholics by promoting dialogue with Muslims.

The meeting could be a way for Burke – the unofficial head of the most conservative and traditional elements within the Roman Catholic church – to send a message to other conservatives. The next Italian election could be called as early as this summer. While Salvini has the support of only about 13% of Italian voters, a meeting between Burke and the rightwing leader could be an attempt by Burke to urge conservatives to rally around the Northern League.

Pope Francis last week essentially replaced Burke in his role as envoy to the Knights of Malta after a tense standoff between the pontiff and the ancient Catholic order that ended with the ousting of the order’s chief. Pope Francis appointed a new papal delegate to be the sole person in charge of communication between the pope and the Catholic order, therefore making Burke – who had served as the top diplomat between the two – irrelevant.

Dozens of mysterious posters appeared in Rome on Saturday picturing a harsh-looking Pope Francis and the words “Where’s your mercy?”. The unsigned posters also noted the “decapitation” of the Knights of Malta. The posters, which were deemed to be “illegal postings”, were removed or covered up by police.