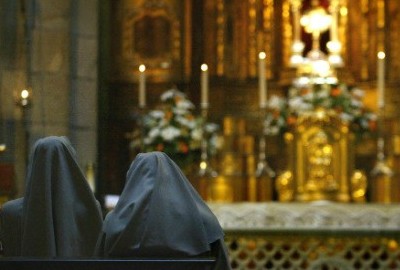 Three nuns claim they have been kept against their will in a Spanish cloistered convent.

Police are investigating claims of three nuns of Indian nationality that they have been cloistered in a Spanish convent against their will since the 1990s when they entered as teenagers.
On Saturday, officers from Spain’s National Police force arrived at the doors of the Convent of Madres Mercedarias de Santiago de Compostela in Plaza del Obradoiro and freed three nuns who claimed they had been ‘kept prisoner’ within the walls of the convent for many years.
Police were sent in after a complaint was made to the immigration office that Indian women were being held against their will in "conditions of virtual slavery" within the convent.
The three nuns all told officers during interviews that they had expressed a desire to give-up their vows but had been prevented from doing so by threats from superiors.
Magistrate Ana L�pez-Suevos launched an investigation after a tip off from a former nun at the convent who had "escaped" late last year on the pretence of visiting a sick relative.
She raised the alarm in late December insisting that the nuns had expressed a desire to leave the convent but were kept there against their will by "threats that they would be deported and returned to their families in India in disgrace," according to a statement seen by ElDiario.es.

She claimed that the women had all arrived from India as teenagers to join the order, take their vows and work in a community where they could help the needy.

"But there was no studying nursing or helping people. Only silence and exhausting work from six in the morning until nightfall within a stone prison. And so passed the next fifteen years," the newspaper reported.
The women who are now in their thirties, are being cared for in a safe house in Madrid while a full investigation is launched into convent authorities.
No arrests have been made and church authorities have yet to comment on the matter.
Source: thelocal.es