Solution is not ‘married’ but equitable distribution! 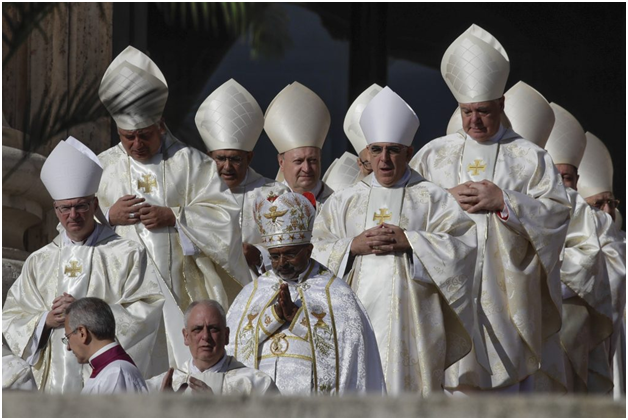 t what this BIG issue Amazon synod is unable  to swallow and digest. Is it  the Elephant size CELIBITE priesthood most loathed due to its drowning in the sea of Clergy-sex or failure on the part if the Church to do equitable distribution of available celibate priests globally?

Both are two different issues. Whether the Church wants to flaunt before the world a celibate priesthood, is a moral, theological, doctrinal and social issue. Whether the available number of priests today is equitably distributed according to differing needs of the place or coutry is an administrative issue, as long as the Catholic church calls itself a global (Cathoilic should mean that) institution.

In the past we said many times that the word “Catholic” applied to the Church is an “Oximoron” a contradiction in terms. It is very very particular—each bishop concerned with his own diocese, each national bishops’ concerned with the needs and wellbeing of their country and not bothered about the dire needs of other less privilaged countries.

Once the Church becomes Catholic, that is global, in spirit and action, then only it will start caring for those in greater need and  come forward with finances and personnel to help. Hence the writer peels out statistics, one after another to prove, what is needed is this: “One must insist on the equal redistribution of priests in the world.” It would instantly solve the probem of shortage of priests.

The need to  introduce married  priests is altogether a different issue, not related to shortage of enough priests. Shortage is in the absence of Catholic mentality to care for and share with the poor in money, resources and personnel. Read the statistics and reach your own concousions. james kottoor, editor CCV.

ROME – In a Synod of Bishops where priest shortages in the Amazon have been driving discussion of ordaining married men, the surprise really isn’t that someone finally noticed there’s another solution, one that doesn’t require changing the traditional criteria for getting a Roman collar.

The only surprise, probably, is that it’s taken this long for someone to say it out loud.Yet there was Bishop Johnny Eduardo Reyes, apostolic vicar of Puerto Ayacucho, Venezuela, on Tuesday night, naming the elephant in the room during a meeting titled “On the way with the synod, witnesses and martyrs of the faith in the Amazon.”

Grasping why it’s such an obvious point requires a bit of basic background about the math of global Catholicism in the early 21st century. There are roughly 1.3 billion baptized Catholics in the world today, over two-thirds of whom live in the global south, especially Latin America, Africa and Asia.

Almost half of those Catholics live in Latin America, including the two largest Catholic countries in the world, Brazil and Mexico. Sub-Saharan Africa, meanwhile, is easily the zone of the Church’s greatest growth, with its total Catholic population shooting up by almost 7,000 percent from 1975 to 2000 alone.

To serve that population, the Church in 2017 deployed a total of 414,582 priests, which represents a ratio of one priest for every 3,135 believers. That overall number, however, disguises vast differences by region.

Again according to official Vatican numbers, there’s one priest for every 1,916 Catholics in the United States and Canada, but just one priest for every 7,203 Catholics in South America. Drilling down, the contrast between Brazil and the U.S. is especially arresting. The U.S. has 37,000 priests for around 70 million Catholics; Brazil, with twice that Catholic population, has 13,000 fewer priests.

A single factoid tells the larger story: Europe today has 42 percent of all priests, but just 23 percent of the world’s Catholic population.

Bishop Wellington de Queiroz Vieira of Cristalândia in Brazil said the same point often applies within national boundaries too during a Vatican briefing Wednesday, arguing that sometimes there’s “a lack of a missionary spirit, a willingness to go to border areas or difficult areas.”

As Philip Jenkins If the Catholic Church were Microsoft or Walmart, it would have implemented a plan a long time ago to shift personnel to where its markets are growing. Instead it’s effectively doing the opposite, as wealthy northern churches are becoming increasingly reliant on importing priests from the developing world to plug perceived gaps. In the U.S., for instance, some 30 percent of all priests today are foreign-born.

Put it almost two decades ago, “Viewed in a global perspective, such a policy can be described at best as painfully short-sighted, at worst as suicidal for Catholic fortunes.” Reyes is hardly the first bishop who’s noticed. All the way back in 2005, during a Synod of Bishops on the Eucharist, Bishop Lucio Andrice Muandula of Xai-Xai in Mozambique drew the seemingly obvious conclusion: “One must insist on the equal redistribution of priests in the world.”

There’s even a patron saint waiting in the wings for the cause: 95-year-old Slovakian Cardinal Jozef Tomko, former prefect of the Vatican’s Congregation for the Evangelization of Peoples.

In 2001, they issued a document titled “Instruction on the Sending Abroad and Sojourn of Diocesan Priests from Mission Territories.” The gist was that transfers of clergy are damaging to the Church in the South. India, Tomko said, didn’t have enough priests to take care of its 17 million Catholics, yet at that time there were 39 priests from India working in one Italian diocese alone. Overall, Tomko claimed, there were 1,800 foreign priests in Italy, with more than 800 working in direct pastoral care.

“Many new dioceses could be created in mission territories with such a number of diocesan priests!” Tomko complained.Of course, there are often legitimate reasons for priests from the developing world to go abroad, and the Church in the developing world often feels pride in what’s called the “reverse mission”, sending their priests today to re-evangelize the very places which once dispatched missionaries to evangelize them.

Yet bishops in the global south could put a dent in these trends by tightening permission for their priests to leave. There’s a terribly simple explanation for why those bishops generally don’t say no: Money.When a priest from a developing nation shows up in Europe or North America, sometimes the receiving diocese will compensate the bishop back home directly. Sometimes the priest devotes a share of his salary to his home diocese, and sometimes he’s able to go on the mission circuit over the summer and raise money for the church back home.

However the situation is configured, it’s usually a revenue stream, and cash-strapped bishops in the developing world often depend on it. Further, those priests often feel their opportunities are greater in the West and aren’t terribly eager to go back.

The hard question the Amazon synod may want to confront is this: Is the problem really that there aren’t enough priests? Or, is the problem at least partly that the priests we do have are in the wrong places? And, is there a better way to get money to churches in the developing world rather than, de facto, financing a chronic exodus of clergy?

None of that bears on the argument over married priests, of course, and there may well be good arguments in favor of moving in that direction. If the only question, however, is how to get priests to the people who need them, Reyes is undeniably right – a married clergy is hardly the only option the bishops might want to explore.