Social justice stressed! ‘In the name of God’: 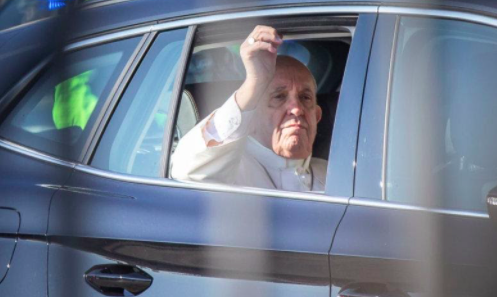 Pope Francis as a Good-Samaritan has always focussed on those on the periphery to  make the Church of sacristy, one fully concerned with those  in the slums!

Will he ever succeed, to convert the comfort-loving clergy and bishops? He will, only if  you and I join him! Then, let us give him, a helping hand! james kottoor, editor WCV

VATICAN CITY (LifeSiteNews) — Pope Francis wants Big Tech to ramp up its censorship campaign of competing ideas and conversations that challenge accepted narratives, asking “in the name of God” that “technology giants” put a swift end to the spread of “fake news” and “conspiracy theories.”

The comments came as part of his 38-minute long video message on Saturday to the World Meeting of Popular Movements, an initiative created by the Pope which purports to uphold “social justice” around the world.

The group describes itself as “grassroots organizations and social movements established around the world by people whose inalienable rights to decent work, decent housing, and fertile land and food are undermined, threatened or denied outright.”

In a nine-fold litany of social justice-fuelled pleas, the Pope appealed “in the name of God” to pharmaceutical labs, financial groups, food corporations, the mining industry, arms manufacturers, technology giants, telecom giants, the media, and “powerful countries” to all join his campaign to see liberal policies, such as a universal basic income and “the reduction of the working day,” implemented on a worldwide scale.

He also devoted part of his speech to urging “all the great pharmaceutical laboratories” to open their patents on the COVID-19 jabs as “a gesture of humanity,” despite their connection to abortion and the experimental nature of the shots, now correlated with some 798,636 injuries in the U.S. alone.

Prefacing his list of demands, Francis insisted that there is a need to “adjust our socio-economic models so that they have a human face,” arguing that “many models have lost it.”

“The pandemic has laid bare the social inequalities that afflict our peoples,” the pontiff noted, adding that “technology can be a tool for good, and truly it is a tool for good, which permits dialogues such as this one, and many other things, but it can never replace contact between us, it can never substitute for a community in which we can be rooted and which ensures that our life may become fruitful.”

The Pope condemned “mining, oil, forestry, real estate, agribusiness” for, in his opinion, their part in “destroying forests, wetlands and mountains,” as well as “polluting rivers and seas.”

He further demanded that arms manufacturers “completely stop their activity,” arguing that the existence of weaponry, even for defense, “foments violence and war.” Likewise, he simply stated “No to neo-colonialism,” citing the globalist United Nations as a means of resolving international conflicts, and reprimanded the media for employing what he called “the logic of post-truth, disinformation,” both of which are pejoratives used against right-wing thought.

Paul Joseph Watson of Summit News noted that the term “post-truth” was created by mass-media outlets as a way of controlling narratives surrounding Donald Trump whilst he was in office. The Pope used the term on three occasions during his speech, notably suggesting that there exists a “post-truth plot that seeks to nullify any humanistic search for an alternative to capitalist globalisation.”

The Pope said that, to redress issues of inequality around the world, there is no easy answer, but “we must dream together.” He did, however, forward two proposals: introducing a basic income and shortening the working day.

Advocating a “universal wage,” Francis suggested that a basic income structure be created “so that everyone in the world may have access to the most basic necessities of life.”

“It is right to fight for a humane distribution of these resources, and it is up to governments to establish tax and redistribution schemes so that the wealth of one part of society is shared fairly, but without imposing an unbearable burden, especially upon the middle class,” Francis said.

A similar idea can be found among the World Economic Forum (WEF), which plans to usher in a modern social and industrial revolution known as the “Great Reset.”

“Shortening the workday is another possibility,” Francis opined, adding that the idea “needs seriously to be explored.” The Pope argued that laborers would break themselves by working “twelve, fourteen, sixteen hours a day” in centuries past, but that no productivity was lost when the eight-hour day became a norm in the 20th century.

He therefore insisted that “working fewer hours so that more people can have access to the labour market is something we need to explore with some urgency.”

The Pope also devoted much attention to the controversy-stirring death of George Floyd, the 46-year-old African American who died at the hands of Minneapolis policeman Derek Chauvin, and the attending protests which he compared to the actions of the Good Samaritan of St. Luke’s Gospel.

Speaking of the protests organized by Black Lives Matter (BLM) which occurred throughout the summer of 2020 in the wake of Floyd’s death, the Pope said that “[t]his movement did not pass by on the other side of the road when it saw the injury to human dignity caused by an abuse of power. The popular movements are not only social poets but also collective Samaritans.”

Notably, the BLM protests have been linked to almost all of the more than 570 riots that raged across 47 states last summer, in which 30 people were killed.