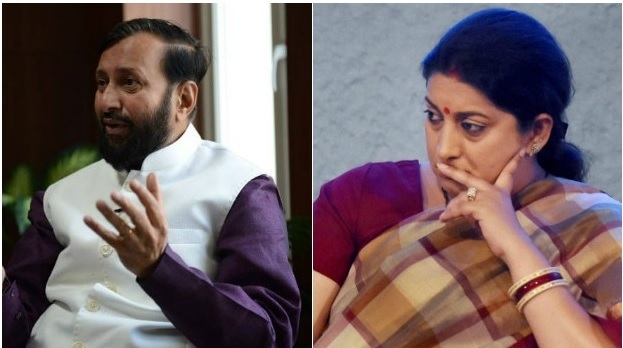 (Note: Smriti Irani was always in the limelight because of her looks and her tit-for-tat talks. Now she is in the news for the reasons: “She was all noise without any real contribution,” as one of her colleagues aptly observed. Some people make news when they get a prominent post, some make news when they lose it and all are happy except the one who loses it. Notable gainers definitely are Prakash Javadekar who  got Smriti’s job and got elevated to the rank of Cabinet Minister,  and  IT Minister Ravi Shankar Prasad  who has been given the additional charge of Law and Justice Ministry.  It is also a feather in the cap of Modiji, who is proving through this  reshuffle,  that “PM has no favourites. It’s performance that matters.” That alone should be the guiding principle – james kottoor, editor.)

NEW DELHI: The much awaited Cabinet reshuffle happened on Tuesday with Prime Minister Narendra Modi infusing new energy into some of the crucial ministries. A few of the controversial ministers were demoted from major portfolios.

At the end of day, it was Prakash Javadekar who emerged as the biggest winner after being elevated to the rank of Cabinet Minister in charge of Human Resource Development. Needless to say, the biggest loser was Smriti Irani who was shunted out to the Textiles Ministry.

“She was all noise without any real contribution,” says one of her colleagues who did not want to be named. “As the head of a crucial ministry, the PM had great expectations of her. But she failed to fit in,” the source added. “This proves the PM has no favourites. It’s performance that matters.”

Another major loser is Law Minister D V Sadananda Gowda. This former Karnataka CM would now be Minister of Statistics and Programme Implementation. IT Minister Ravi Shankar Prasad has been given the additional charge of Law and Justice Ministry.

Similarly, Chowdhary Birender Singh, the powerful Haryana leader, who moved to BJP from Congress party in 2014, has now been shifted to Steel Ministry.  Chowdhary is known to have a mind of his own and has also made it clear several times. Be it his open support of MGNREGA, or his position on Land Acquisition Act, Chowdhary was not quite in tune with the Government line. “There is a price for talking one’s mind,’’ said a source close to minister. He has been replaced by Narendra Tomar.

The highlight of the reshuffle is that ministers close to the RSS have managed to retain their posts despite below average performance. Whether it’s MoS J Tawarchand Gehlot or Labour Minister Bandaru Dattatreya, they have not been touched despite the fact that they are not in the good books of the Prime Minister