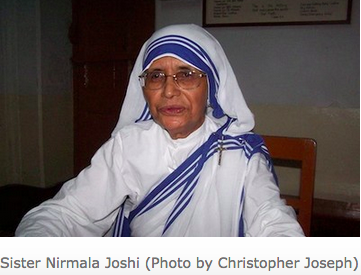 Nun's devotion to poor commended by Catholic and government leaders.

Kolkata (Story- UCAN):  Sister Nirmala Joshi, who succeeded Mother Teresa as the head of Missionaries of Charity (MC), died Tuesday in Kolkata. She was 81. Indian Prime Minister Narendra Modi expressed his "deepest condolences" saying he was "saddened" by her death.

The dedicated and beloved nun was elected as superior-general of the congregation at the age of 63, in March 1997, six months before Mother Teresa died. She completed two six-year terms, and was elected for a third term in 2009 but she declined because of health issues. The MC constitution only allows two terms while a third term requires papal approval. "She indeed carried forward the legacy of Mother Teresa, a legacy of love and service to the poorest of the poor through her nuns all around the world," said Archbishop Thomas D'Souza of Kolkata, where the nuns' global headquarters is based.She was second among 11 children of a Nepalese Hindu family who settled in Bihar state of India. Born Kusum [flower] on July 23, 1934, she graduated from Patna Women's College, managed by Apostolic Carmel nuns. She had told media that her call came while at the college hostel in Patna, when she saw a Hindu companion kneel to pray and make the sign of the cross. She was then just 16 years old. The daughter of a late army officer, she continued her "search" for seven more years and became a Catholic in 1958 at age 23. She joined the MC congregation a month later.

Her family was not happy with the conversion, she told ucanews.com in an interview. However, her younger sister Bindu also became a Catholic and joined the Apostolic Carmel nuns.

The now Blessed Teresa chose her as her companion when she visited China in 1993 and Vietnam in 1995, when world media began to project the Indian nun as a possible successor to Mother Teresa. During those times, the Indian media looked on her as "the dark horse" among the likely successors. Caring and holy Sr Nirmala joined the contemplative section of the congregation, where nuns spend most of their time in prayer before the Blessed Sacrament, and "continued a hidden and unassuming life of prayer and service", Archbishop D'Souza said.

As head of the contemplative wing, and later as superior-general, “she used to spend every Thursday in prayer", Archbishop D'Souza said. The prelate said her death is a loss for the Church in Kolkata but "we are sure we have a saint in heaven to intercede for us". Retired Archbishop Henry D’Souza of Kolkata said she was "a beautiful example of commitment to the Church and service for the poor". Sr Lynn Mascarenhas, a senior nun in Kolkata, said Sr Nirmala was "very holy and many people used to come to us for her blessing”.

“We will all miss her very much." Bolly Pereira, a frequent visitor to the MC Mother House, which houses the tomb of Blessed Teresa, described Sr Nimala as a very saintly person.

"About two weeks ago I saw her in a wheelchair looking very frail and weak. But when asked how she was she said she was fine although she was really very sick."