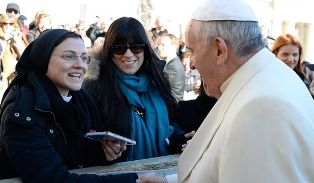 Vatican City: A Catholic nun who mesmerized the world with her silken voice last March realized her dream on Wednesday.

Sister Cristina Scuccia, who became the Voice of Italy, in June met and shook hands with Pope Francis in St. Peter’s Square. She also handed him a copy of her self-titled first album, which includes the single “Like A Virgin.”

Her cover of Madonna’s classic song has gathered more than 4 million views on YouTube.

The Italian nun burst into world’s central stage with the rendition of this Madonna song. She shattered stereotypes with her powerful voice and electric stage presence to become a rock star.

Finally she got the chance to meet the biggest rockstar of the Catholic Church — Pope Francis.

It fulfilled a dream that the young nun articulated in her very first performance for Italy’s “The Voice” in March.

When the judges asked Sister Cristina what the Vatican would think of her singing, she reportedly replied, “I hope Pope Francis will call me now.”

That dream finally came true after Pope Francis’ general audience on Wednesday. According to Ansa, the pope responded with a big smile when she gave him her album.

Sister Cristina is slated to perform at the Vatican’s Christmas concert on December 13, along with American singer Patti Smith.

After winning the Voice of Italy singing contest, the Ursuline nun launched her first album last month, after a single also included in the album, with her version of Madonna’s Like a Virgin.

Sister Scuccia won the Italian edition of “The Voice” in June with a series of unadorned pop song performances, romping around the stage in a full habit.

While some privately questioned her behavior then, the Italian Bishops’ Conference went public with its criticism this fall when Scuccia included “Like a Virgin” on her first CD. The bishops said it was a commercial ploy.

Sister Scuccia defended her decision and said the song was prayer-like.